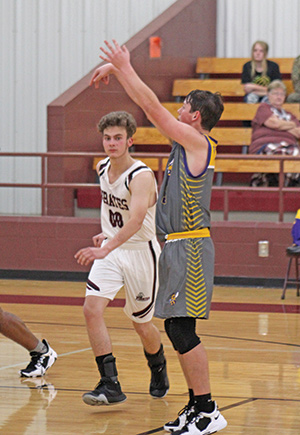 The Yellowjacket basketball team returned after the break with a well-earned victory over the Baytown Christian Bulldogs last Thursday, Dec. 30.

The game started out slowly for the Jackets, as they trailed the Bulldogs 3-17 at the end of the first quarter. The shots began to fall for the Jackets in the second quarter, as they outscored Baytown Christian and headed into the locker room at halftime trailing by just seven points.  The second half was very tight, with the score neck and neck all the way to the final seconds, with Chester winning 53-51.  Coach Justin Hilliard was pleased with his team.  “Coming out after the holiday break with a few players out and fighting so hard after being down just shows how bad these boys want to win,” Hilliard said.

The Lady Jackets also got a win last week.  The Lady Jackets defeated Baytown Christian 38-27.  The girls started the game sluggish and did not play their best during the first half.  However, they came out of the locker room and took care of business.

Coach Justin Hilliard said, “The girls showed resilience against Baytown Christian, which is encouraging.”  Hilliard added that even with a few key players out due to illness, the girls fought hard and never gave up.

The junior high teams will be at home on Thursday, Jan. 6, as they host Apple Springs.  Game time for junior high girls will be 5 p.m., with the boys game to follow.