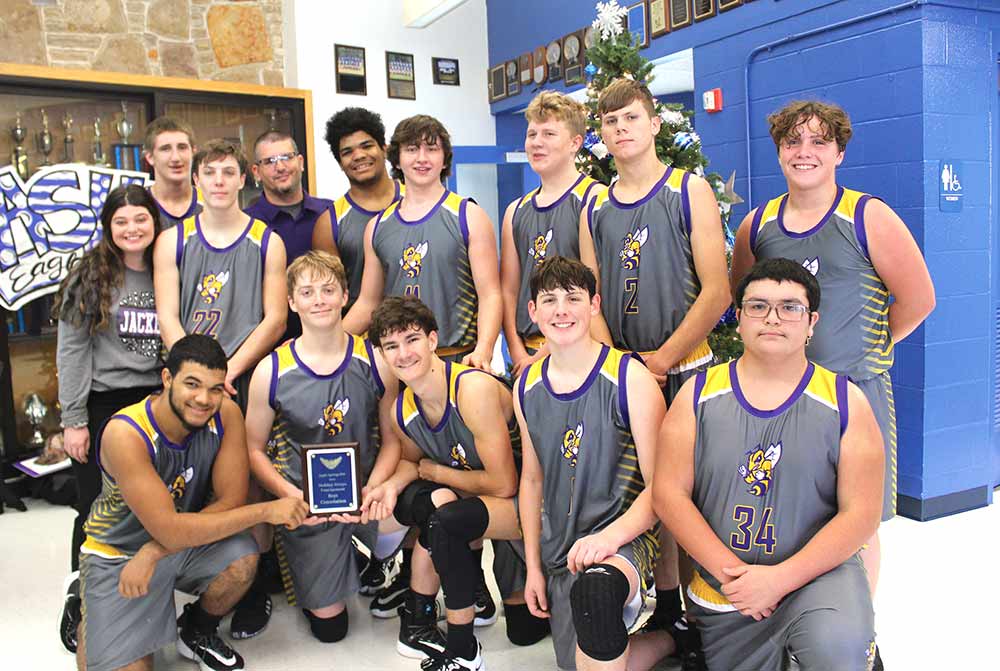 The Yellowjacket boys basketball team also traveled to Spurger last Tuesday.  The Yellowjackets played a great game against the Pirates, and the boys played better defensively than they have all season.  The game was close the entire four quarters, with the Jackets losing 40-45.  Leading in scoring for the Jackets was Jack Rayburn with 12 points.  Carson Thomson was right behind Rayburn with 10 points.  Cutter Lowe scored seven points, Luke Read scored six points, and Rick Carlton scored five points.

The Yellowjackets played well in the Apple Springs Holiday Hoops Tournament November 2-4.  The Jackets went 2-1 in the tournament, with their loss coming in the first game of the tournament against the Grapeland Sandies JV team.  The Jackets lost against the Sandies 36-48.  Luke Read led the team with 10 points.  Carson Thomson scored seven points, Jack Rayburn and Keighen Green both contributed six points, and Rick Carlton added a free throw.

The Jackets came back for game two and defeated Centerville 42-40 in a game that came down to the final seconds.  Carson Thomson went on a scoring spree in the last quarter and ended the game with 19 points, seven of those points coming from free throws. Jack Rayburn contributed 15 points, Rick Carlton scored four points, and Luke Read, Cutter Low and Keighen Green all added two points. The Jackets won the consolation game against the Full Armor Christian Academy by a score of 52-15.  Jack Rayburn led the team with 12 points and 100% at the free throw line.  Luke Read scored 10 points, Keighen Green scored eight points, Rick Carlton added six points, and Carson Thomson finished the game with four points. Both Bradley Davison and Jeff Knox knocked in 3-pointers, and Kessler Romo and P.J. Purvis each scored a basket.  Carson Thomson, Luke Read, and Jack Rayburn were each awarded All-Tournament honors.

The Jackets will compete in the Deweyville Classic on Dec. 10-11. The tournament bracket has Chester playing host team Deweyville on Friday, Dec. 10 at 11 a.m.  A win will have the Jackets playing that same day at 2:30 p.m. If the Yellowjackets lose the game against Deweyville, they will play again at 4 p.m.

The boys will have a bye on Tuesday, Dec. 14, as they prepare to begin district play on Friday, Dec. 17 against Burkeville.

The Lady Jackets will compete in the Deweyville Classic on Dec. 9-11. The tournament bracket has Chester playing Colmesneil on Thursday, Dec. 9 at 1:30p.m.  A win will have the girls playing that same day at 4:30 p.m. If the Lady Jackets lose the game against Colmesneil, they will play again at 3 p.m.

The girls will play a district home game against the Zavalla Lady Eagles on Tuesday, Dec. 14.  The game will start at 6 p.m.

The junior high boys and girls traveled to Burkeville on Monday, November 29.  The girls and boys teams both defeated the Mustangs.  Coach Justin Hilliard is pleased with the progress the teams are making this season.

The junior high boys and girls will travel to Spurger on Monday, Dec. 13 to take on the Pirates.  The girls game will tip off at 5 p.m. with the boys game to follow.