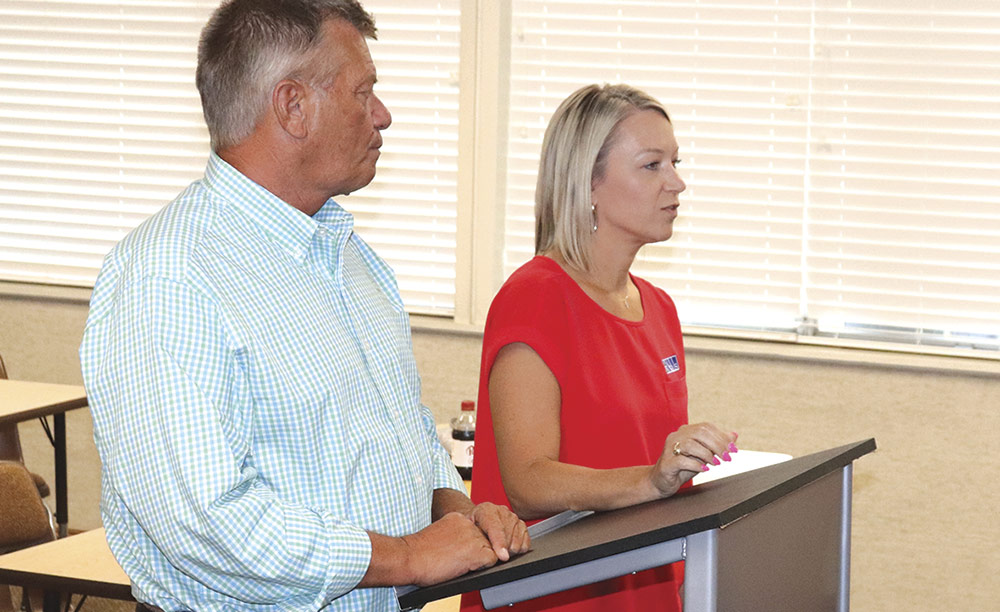 Todd Lewis and Courtney Kelly, with the WISD bond facility team, presented updates to the Board of Trustees at Monday evening’s meeting. Photo by Chris Edwards

WOODVILLE – At its regular meeting on Monday, the Woodville ISD Board of Trustees discussed some of the necessary baby steps in going forward with its slate of district-wide improvements made possible by the $47.8 million bond election, but as Superintendent Lisa Meysembourg noted, that forward motion could be halted.

A motion was filed against WISD in district court last week, Meysembourg said. The motion, which contests the bond election results, was filed by Woodville resident Charles Rawls.

The bond passed in May with a 51.20% majority of the vote. During last month’s WISD Board meeting, Rawls was one of two residents who spoke during the public forum portion of the meeting. He addressed the bond election, and claimed there was improper balloting, among other issues.

Tyler County Clerk Donece Gregory explained that there were discrepancies with two voters within the district’s electorate.

Canvassing resulted in 621 “for” votes and 592 “against” the bond package, which will see the construction of a new elementary school and additions to the Career and Technical Education Center.

Meysembourg said the case has been expedited, but it could still be up to seven months before a decision is reached.

Meysembourg said the district’s attorney is working on the case, and also looking into whether or not the district’s insurance will cover legal fees in the specific situation.

One of the action items on Monday night’s agenda set forth the consideration of a resolution to declare an intent for the district to reimburse certain costs done in preparation for the bond-funded work with the bond funds when available.

Meysembourg said that since bond sales typically happen in August, beforehand, school districts can front money associated with certain costs. The two planning tasks ahead that would be covered, she said, would be a topographical survey of the land where the elementary school is to be located and a working design for the campus.

A lengthy discussion ensued among the trustees about approving such a resolution in the face of litigation. Ultimately, the item died for lack of a second to John Wilson’s motion.

Prior to the discussion on the proposed resolution and the lawsuit, the board members heard a presentation from two representatives on the bond facility team.

Todd Lewis with Gallagher Construction spoke about the process ahead for the elementary school, and Courtney Kelly, an architect with Goodwin-Lasiter-Strong spoke about the design phase.

Kelly said there has been some preliminary work done, and several of the elementary teachers were taken to campuses around the region to observe features and give feedback as to what they liked and did not.

“Gallagher and GLS have worked together for many years, so I can see this being very seamless,” Lewis said.

In her regular report to the board, Meysembourg informed the trustees about a topic that came up at a recent administrators’ conference, dealing with student dress code matters.

Meysembourg put forth an idea as to whether or not the board might want to see WISD become more lenient on tattoos, hair color and certain piercings.

At present, the district’s dress code is prefaced by stating that staff members “serve as role models and should dress professionally at all times when students are at school.”

Currently, tattoos must be covered unless approved by the campus administrator and/or Meysembourg, while piercings, other than ears, are not permitted. In the state of Texas, tattoo clients must be 18 years of age, unless accompanied by a parent or guardian.

Under the heading “Hair and Grooming,” the current dress code stipulates that “[d]istracting hairstyles or hair ornaments are not permitted,” and above that, hair “must be clean, near….and of a natural color.”

Meysembourg cited changing attitudes in society on these topics as a reason for possibly amending the dress code and asked the board’s opinions.

Josh McClure said those who enforce the dress code should be more concerned with infractions involving revealing clothing, while Richard “Kooter” Shaw said he is not a fan of blanket policies and sees no problem with piercings, tattoos or hair color having any sort of bearing on a person’s character or educability.