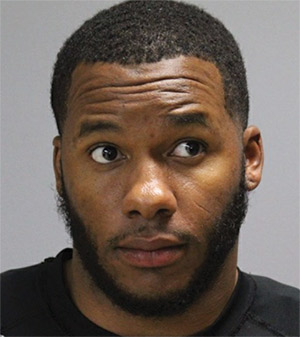 Lamont GreenBy Chris Edwards
This email address is being protected from spambots. You need JavaScript enabled to view it.

SPURGER – A Houston man is currently incarcerated in the Tyler County Justice Center on multiple charges, including felony theft.

Lamont Green, 28, was one of several individuals on the scene of the Citizens State Bank in Spurger when deputies with the Tyler County Sheriff’s Office were patrolling and discovered the subjects running from the back of the bank. According to Tyler County Sheriff Bryan Weatherford, the incident occurred at 2 a.m. on Friday, Sept. 3, when the deputies on patrol observed two dark passenger cars following one another closely, pulling into several different parking lots and moving around town.

Weatherford said that a short time later, the deputies saw a third vehicle, which was followed by a white Ford pickup truck, make a quick turn into the bank’s parking lot, and the other vehicles they had observed pulled up and parked just south of the bank, while additional vehicles continued to drive past the bank slowly.

Weatherford said that the deputies were able to recover the ATM’s money boxes, with the money still inside, from a nearby wooded area. The white Ford F-250 was discovered as stolen from a Jasper County residence, while a black car on the scene was a rental out of Houston.

“Several Southeast Texas law enforcement agencies, including the Texas Rangers and the Tyler County District Attorney’s Office are assisting in the investigation of the case,” Weatherford said.

Green remains in custody on charges of felony theft; engaging in organized criminal activity, and active warrants for his arrest out of Harris County.  His bonds have been set, combined, at $130K with the theft charge, itself, set at $100K.

Weatherford said that with the evidence collected at the scene, as well as additional information that investigators were provided, more charges and arrests are expected.