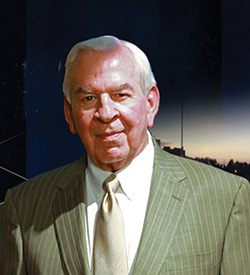 Walter UmphreyBy Chris Edwards
This email address is being protected from spambots. You need JavaScript enabled to view it.

BEAUMONT – Walter Umphrey, an attorney of international renown and philanthropist, died on Tuesday at the age of 85.

Sources indicate that Umphrey died in Beaumont. He owned Timberline Ranch in the southern end of Tyler County, and donated his time and money to numerous causes and public works in the region.

In a statement from his widow, Sheila, Umphrey was suffering from Alzheimer’s Disease. “He was my best friend and the love of my life for 63 years,” she wrote.

“I’m broken-hearted, but it’s for the best,” she added, before explaining his diagnosis.

Umphrey was the founding partner of the Beaumont-based Provost-Umphrey Law Firm, and he was named “Lawyer of the Year” in 2012 in personal injury litigation.

Terry Allen, the county’s chief juvenile probation officer, wrote on Facebook that she and her husband, Kenneth, moved to Tyler County in 1989 so that he could work for Umphrey on Timberline Ranch.

“We have lived at Timberline Ranch for 30 of those years. It has been a wonderful place to raise a family,” she wrote. “Mr. Umphrey was a defender of the ‘common man,’ and he will be missed.”

A section on the Provost-Umphrey website devoted to him stated that if a chronicle of his achivements were printed, they “could fill a hefty tome to rival the loftiest Larry McMurtry novel.”

Umphrey, a Port Arthur native, attended college at SMU on a football scholarship prior to receiving his BBA at Baylor in 1959. He later enrolled in Baylor Law School, where he graduated with his JD in 1965.

Throughout his 50-plus year career, he worked in a variety of capacities in law, from prosecutorial duties with the Jefferson County District Attorney’s office to Chief Felony Prosecutor, before he founded his namesake law firm in 1969.

Umphrey came to national prominence when he pioneered asbestos litigation. He was, as the Provost-Umphrey website states, lead counsel of a five-man “dream team” of attorneys who represented the State of Texas in its historic lawsuit against the tobacco industry, which led to a $15.3 billion award to the state, plus an additional $3.3 billion the tobacco industry agreed to pay Umphrey and the other attorneys for their fees.

He received numerous accolades and titles throughout his life and career, including “Legal Legend” from Texas Lawyer magazine.

Throughout Southeast Teas, Umphrey was equally as well-known for his philanthropy. The Umphrey Pavillion at Sam Rayburn was funded, in part, from a donation made by Umphrey.

In 2005, the Umphreys donated $5 million to build the Sheila Umphrey Recreational Sports Center, which opened two years later, at Lamar University. He also provided financial assistance to LU when it revived its football program. When the stadium was renovated, it was renamed the Provost-Umphrey Stadium.

Umphrey also donated $1 million to the Humane Society of Southeast Texas to build a new facility.

In his own remarks on the Provost-Umphrey website, Umphrey wrote that in his life, what he enjoyed the most was building the law firm and helping people.

“We don’t represent the big corporations. We help individual people. That’s what I’m most proud of,” he wrote.