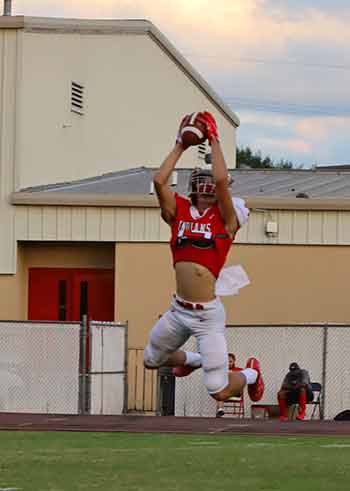 ANDERSON — The Tigers had to try to quickly get into game condition to make up for two weeks of missed games, practices and conditioning due to COVID.

It wasn’t enough, as the Tigers were blanked 28-0 in a final non-district game before heading into district.

The Tigers received the opening kickoff and showed promise on their first drive of the night driving the ball to the Owl 33-yard line before turning the ball over on downs. The Owls were able to take control of the game on their first offensive possession and drive the ball 67 yards for a touchdown. With the 2-point conversion the Owls took an 8-0 lead with 4:48 left in the first quarter.

The Tigers were unable to move the ball on their next opportunity and a short punt gave the ball back to the Owls on the Tiger 30-yard line. With just 30 yards needed to score, the Owls were able to take a 14-0 lead with 1:02 remaining in the first quarter.

The Tiger offense was still unable to put any drives together in the second quarter but the defense was able to force one punt by the Owls. As time dwindled in the opening half the Owls were able to find the end zone once again and take a 22-0 lead into the locker room at halftime.

The second half did not prove to be any better for the offense being able to sustain scoring drives, but the defense was able to put more crucial stops together and hold the Owls to just one score after a failed fourth-down attempt gave the ball back to the Owls on the Tiger 30-yard line. The drive was successful, giving the Owls a 28-0 victory over the Tigers.

Coach Patrick Goodman told the team after the game that he was proud of the effort given by the team and said that next week starts district play against the Diboll Lumberjacks. Unlike the Tigers, the Lumberjacks were able to get in four complete non-district games prior to the district opener and should be in better condition, so it will be a battle for the Tigers to come away with a victory.

GROVETON — The Indians fell 44-13 to the Shelbyville Dragons on Friday at home.

On the ground, Isaiah Tayler had 6 carries for 8 yards; Hayden Lee had 5 carries for 19 yards, and Phoenix Bowman had 1 carry for 13 yards.

Bowman also brought in 2 receptions for 32 yards and the teams only TDs. In receiving, Jonathan Taylor caught 4 for 52 yards, and Hayden Lee pulled down 2 for 17 yards.

Next up for the Indians is Garrison this Friday, followed by a bye week.

APPLE SPRINGS — While the Eagles posted a 36-13 loss to Alpha Omega JV on Friday, it was a game marked by improvement and positive achievements.

Head Coach Cody Moree said it was the team’s best game so far, after they woke up and realized they could compete.

“We spotted them 30 points before we ever came alive,” Moree said. “In the second half we outscored them 13-6 and gave up only 3 first downs.”

Dakota Campbell led the offense with 132 yards rushing on 10 carries and one touchdown. He also passed for 109 yards with 16 out of 28 completions. Kameron Spencer had 24 yards on 6 carries with one rushing touchdown.

Defensively, we recorded 5 stops during the game including two turnovers. Ashford had 7 tackles, Smith 3, Nunley 5, Andrew Pion 4, Clayton Tullos 1, Ricky Goodwin 3, Phillips 4, and Dawson Moore had 5. Ryan Phillips and Dawson Moore each had an interception.