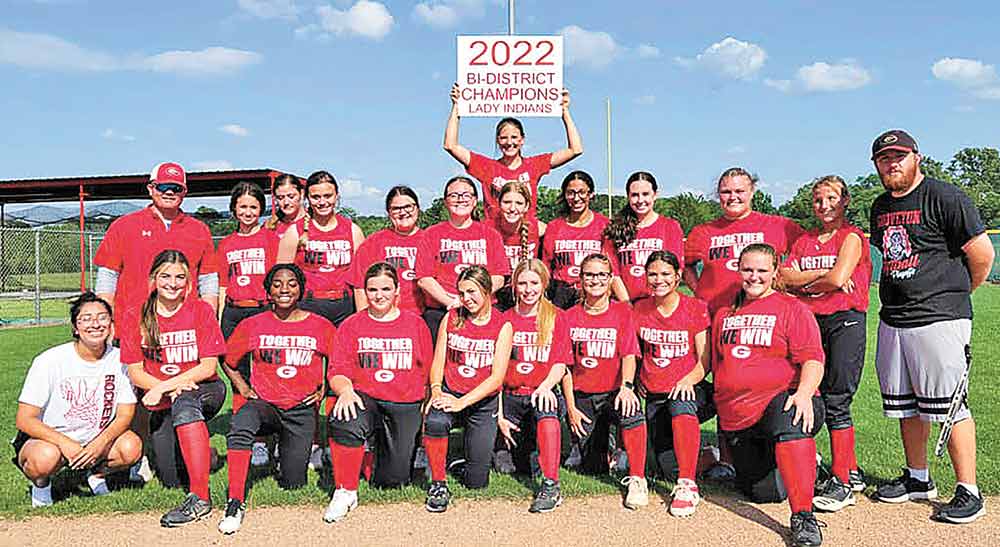 The Groveton Lady Indians softball teams claimed the bi-district title, and are heading to the next level of playoffs. Courtesy photo

The Lady Indians are moving on to the next round of playoffs after downing Joaquin in two games to claim the title of bi-district champions.

Coach Chris Sexton said that after two long games played with high intensity, they we feel tired, happy and excited to be continuing on.

The first game on Thursday was a 9-inning pitchers’ duel, as pitchers for both teams were hitting spots and keeping batters off balance, Sexton said.

Groveton started Landree Martin, who went just over 7 innings, giving up 7 hits, 1 run, 12 strikeouts and 1 base on balls. Megan Luce came in for relief, pitching 1 2/3 innings and giving up 0 hits, 0 runs, 0 bases on balls and striking out 1.

“We had to find a way to win with small ball in game 1 and came away with a 2-1 victory,” Sexton said

Landree Martin and Rebecca Langley drove in the runs for Groveton.

Friday’s game was the opposite, an offensive slug fest that ended up with the Lady Indians topping Joaquin 20-18.

Kierynn Smith had a big game offensively, going 3-for-5 with 1 double, 1 Triple, 5 RBIs and 2 stolen bases.

“I’m proud of the way the girls overcame so much adversity and found a way to win two very different styles of close games,” Sexton said.

Groveton faces Deweyville in a doubleheader in the first round of area playoffs. Game time is 5 p.m. in Jasper.

The Bulldogs we hosted Apple Springs on April 26 to close out district play, and came away with a 7-3 win over the Eagles.

Ayden Self went 5 shutout innings on the mound, allowing 2 hits and striking out 9.

Coach Geoff Hollis said the team scored 7 runs through the first 6 inningsm, taking a 7-0 lead into the 7th.

Anthony Commiato made his first appearance on the mound in the 7th and struck out the first two batters then struggled, giving up 3 hits and 3 walks and allowing 3 runs for a final score of 7-3 victory for Centerville.

Senior Devin Capps hit his first career home run over the right field fence for a solo shot as well.

The Tigers ended a rough season with two losses — 18-2 loss to Tarkington on Friday and 25-7 loss to New Waverly on April 26.

The Indians will be in a bi-district playoff game Friday against Lovelady in Elkhart after posting a 4-2 win over Cushing on April 26.