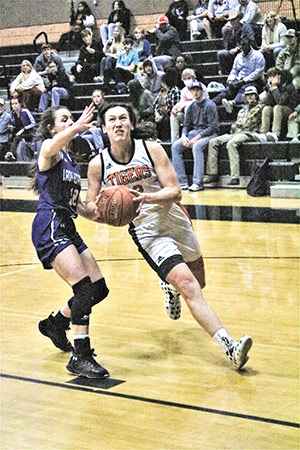 Lady Tiger Zoey Grey sets up for a layup during a Tuesday game against Hardin. TCNS staff

CENTERVILLE — The Bulldogs were able to beat cross-county rival Apple Springs 53-38 on Friday, even without top players Logan Whittlesey and Caleb Carroll, who were out due to illness, and Jerry White, who was out due to injury.

The Bulldogs took a 30-25 lead into halftime, and second half offensive struggles for the Eagles resulted in a 43-31 lead for Centerville heading into the fourth.

Head Coach Geoff Hollis said it was the team’s best start to a game this season, with the Bulldogs jumping out to a 23-16 lead after the first quarter. Kennard heated up to fight back to cut it to a 1-point deficit heading into halftime 35-34.

Both teams lost three players to foul trouble, and the remaining players put out a see-saw effort. With the game tied 58-58 with less than 10 seconds to go, Junior Bulldog Ayden Self drove nearly the length of the floor and made a tough layup with 2 seconds to go to win the game for the Bulldogs.

Self led the way with 32 points, along with 8 points from freshman guard Brayden Watson.

On Jan. 25, Centerville traveled to Oakwood to face the Panthers. Junior post Jerry White suffered a serious elbow injury in the second knocking him out for the rest of the game and potentially the rest of the season.

Oakwood took a 17-11 lead into halftime, and a 26-19 lead heading into the fourth, and despite efforts by the Bulldogs, Centerville couldn’t quite get over the hump and the game ended in a 36-31 Oakwood victory.

ANDERSON — The Tigers put two in the W column with wins over Anderson-Shiro and Hardin.

CENTERVILLE — The Eagles were downed by the Bulldogs 53-38 on Friday.

The Lady Indians were able to down district rivals Latexo 66-19 on Friday.