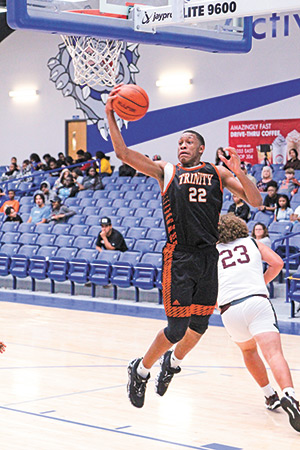 Trinity Tiger Terius Maxie (No. 22) pulls down the ball. Photo by Larry LambSpecial to the
News-Standard

GROVETON — The Groveton Lady came from behind in the first half and stayed dominant through the second to down the Coldspring-Oakhurst Lady Trojans 39-29.

Top scorers for the game were Kiki Smith and Tatum Porter with 10 points each, Bre McQueen with 7 points, Isavel Bautista with 5 points, Maddy Thomas with 3 points and Lexia Blanks with 2 points.

Top scorers for Groveton were Porter with 11 points, McQueen with 10 points, and Anahi Chavez with 4 points.

Top scores were Porter with 16,  Kiki Smith with 14, McQueen with 8 and Anahi Chavez with 6 points.

Smith nabbed 5 steals to McQueen’s 3; and Porter pulled down a whopping 18 rebounds, Bautista had 10, and Hannah Spurgeon contributed.