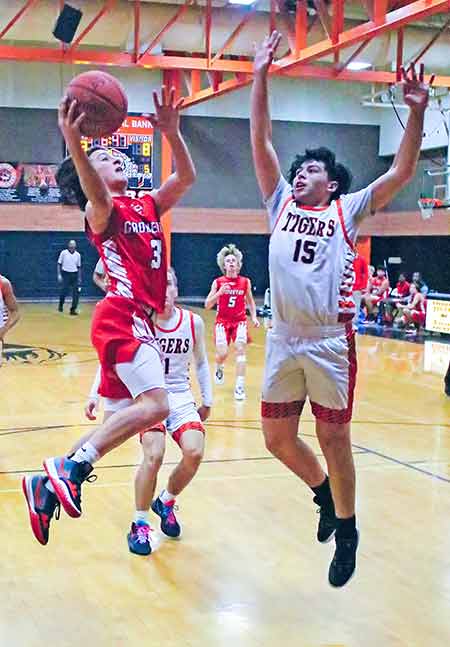 Coach Jacoby Mitchell said the team is getting better each and every time they compete.

“We have to continue to fine-tune some things as we prepare for our district opener Friday vs. Hardin,” he said.

Tournament standouts were Terius Maxie, who led the team in points, rebounds and blocks and who earned all-tournament honors as voted on by other coaches.

Other standouts over the weekend include Cameron Anderson and Zylan Woods.

Trinity was to be in action Tuesday night against Grapeland before starting district play on the road against Hardin on Friday.

ZAVALLA — During the Zavalla basketball tournament held Thursday-Saturday, the Bulldogs won three and lost one for a second-place finish.

On Friday, a tough battle with Groveton full of big plays from both teams was won by the Bulldogs 46-43 in the last few seconds. Seniors Devin Capps and Whittlesey made huge fourth quarter free throws that helped win the game.

On Saturday, Centerville downed Founders Christian 51-49 in a battle for second place.

Founders Christian jumped out early with a 25-17 lead at halftime; that grew to 14 points halfway through the third. Coach Geoffrey Hollis said the Bulldogs made a run to cut it down to 7.

Hollis said Centerville was down 39-32 entering the fourth quarter, and both teams battled in a back-and-forth game with huge plays. The Bulldogs came out with a 51-49 win to claim second place in the bracket.

Whittlesey had a season high 26 points and Self chipped in 9 points.

“We played some great basketball this weekend and got some momentum rolling before we open district play Friday at home when we host Oakwood,” Hollis said.

Daiton Chandler had 30 points in the Harmony game.

NECHES — With only on game on the schedule last week, the Lady Eagles to Neches 80-8.

This week Apple Springs was to play Kennard at home Tuesday.

The Lady Tigers lost their first district match 49-39 on Dec. 7.