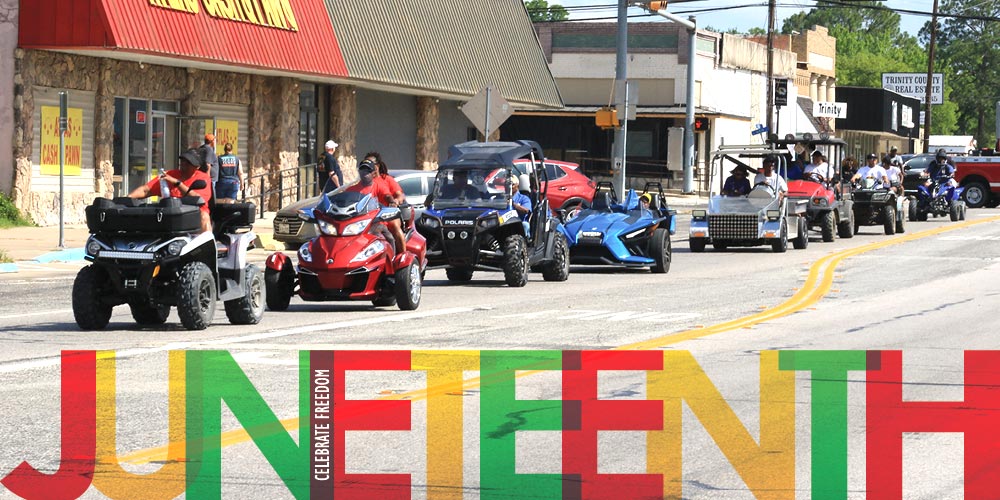 Vehicles of all types are displayed during the Juneteenth Parade. Photo by Tony Farkas

TRINITY — Freedom was celebrated on Saturday by Trinity residents on a day that means so much to so many — Juneteenth.

Lena Holley Boston, president of the Juneteenth Movement Committee, leads the group that plans and coordinates the event every year.

Juneteenth holds a special place in Boston’s heart, and it was a much bigger event when she was growing up.

“This was a big deal when I was a little kid,” she said. “The parade was probably three times as long as it was today; every African America church in town had a float. It was huge. We wish we can get it back to that, but we don’t want the memory to fade.”

This year, we had a lot more people step up, and Boston said it would be awesome if they could rejuvenate the celebration, as so many of the original organizers have passed away.

“This event is not just for the African American community, it’s for everybody, and it will help us come together as a people,” Boston said. “It’s a celebration of the day that everybody was free. We celebrate freedom on Independence Day, but our people were not free, and even more so in Texas, since we didn’t find out until two years later.”

She said there’s more to the event than fellowship, there’s an educational element to Juneteenth celebrations as well.

Boston was born and raised in Trinity, graduating from Trinity High School in 1992. She left the area for a time, but when she returned, the committee reached out for her help, as they felt the annual celebration was dying off a little, especially since COVID stopped things for a while.

“We kicked it back off this year, and it’s already bigger and better,” she said. “We want to keep it going for the kids. So it was awesome to see support from community members for this.”