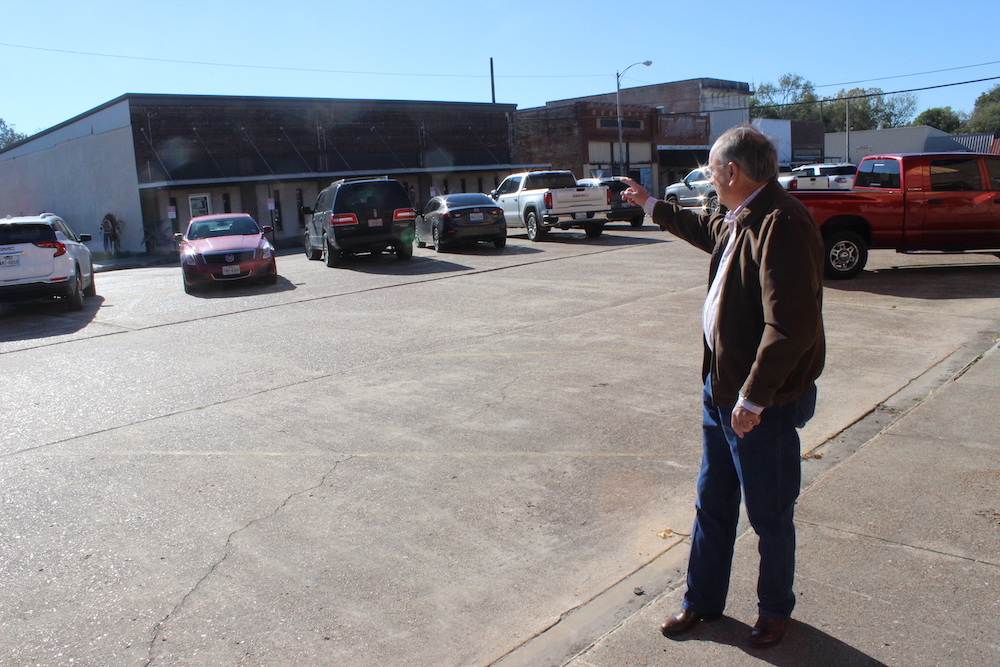 Photo by Tony Farkas | TCNS Groveton Mayor Byron Richards points out some of the plans for renovating the sidewalks in the downtown Square. The city has received a $980,000 grant and will begin work Nov. 30.

GROVETON — An almost $1 million grant will help city officials tidy up the Square, with metal railings, new sidewalks and some new lighting.

Mayor Byron Richards said the city has been working on the Groveton Downtown Revitalization Project for nine years.

“We submitted grant applications over a period of six years and didn’t really land one, seeing them go to bigger cities. We didn’t think we had a chance at it,” he said. “After the sixth year, we got word that the city will receive funds from the Transportation Alternatives Set-aside Program.”

Richards said the city signed a contract for $980,000, but was $67,000 short to complete the project; that money will come from our Economic Development Corporation. Construction will be done by Ti-Zack Concrete Inc., and the project is slated to start Nov. 30. It’s projected to take six to seven months.

The project will feature new sidewalks around the Square, which also will provide handicapped access. There will be lighting throughout the project, as well as safety railings.

“These sidewalks and curbs are a trap, and can cause falls,” he said. “This allows anyone disabled or not to have access to downtown businesses. The whole purpose of the project, as I envisioned it nine years ago, is to update the area and give the city a new look.”

Groveton has been stagnant for years, the population has declined, and big businesses that wanted to come in were turned away, Richards said.

“We’re trying to look to the future,” he said. “With the population that’s moving to this area, East Texas finally is being recognized as a good place to live, to raise a family. We’re trying to move the city forward as best we can.”

This project is one of many projects that have been undertaken in recent years, which includes renovations to the city’s sewers and water system, courthouse work, highway and sidewalk construction, numerous upgrades and even work on the courthouse and annex. All told, it’s more than $23 million spent on beautifying the city, Richards said.

Along those lines, there will be a commemorative brick paver section right on the corner, and laser-engraved brick pavers will be sold for $25. Contact Richards at City Hall for information.

“We need new economic activity in this area,” he said. “There is a new Family Dollar coming; a manufacturing company taking over the old sewing machine plant. We need new sources of sales tax and real estate taxes coming into the city, and hopefully draw more retailers in.

“We’re takin’ an old girl and dressin’ her up, and we have hope for the future that Groveton will grow,” Richards said.