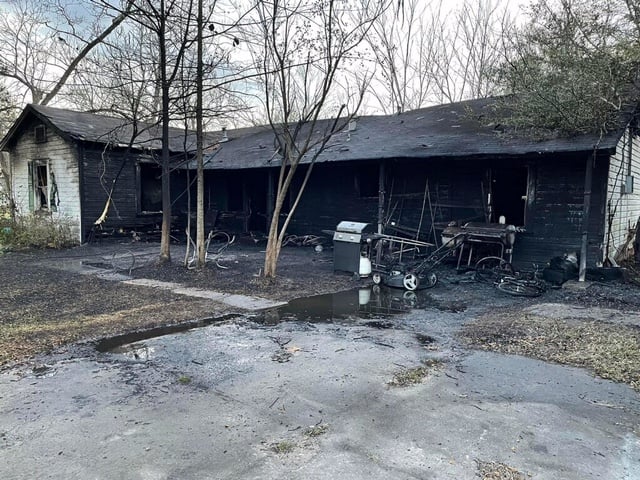 A home on West First Street in Groveton was destroyed by fire on Wednesday.

GROVETON — A single family home was destroyed in an early afternoon fire on Wednesday.

Groveton Fire Chief Glenn Hammond said the blaze broke out at about 3:21 p.m. at the address on West First Street, and the Volunteer Fire Department responded with its engine, a brush truck and five firefighters approximately 6 minutes after being called out.

Hammond said that when he arrived, the house was totally involved. The combined crews had the fire knocked down in about 1 ½ hours.

“The guys did a good job mopping up, there were no hot spots,” he said.

Hammond said the resident, identified as Sandy Walters, told a sheriff’s deputy  he was going to cook eggs, and turned stove on; fire started there, traveled to ceiling. No further investigation needed.

The home and its contents are a 100 percent loss; however, no injuries were reported.

Donations for Walters are being taken at Susie Q’s. Items being accepted are clothes, sweat pants medium, large shirts and size 8 shoes for a man; and large shirts, pants size 12-14 and size 7 women’s shoes.

A fundraiser also is being organized by Kayla Fry to help replace all items, including the many Christmas gifts purchased for the family. To donate, go to https://www.gofundme.com/f/neka5-help-my-grandma.