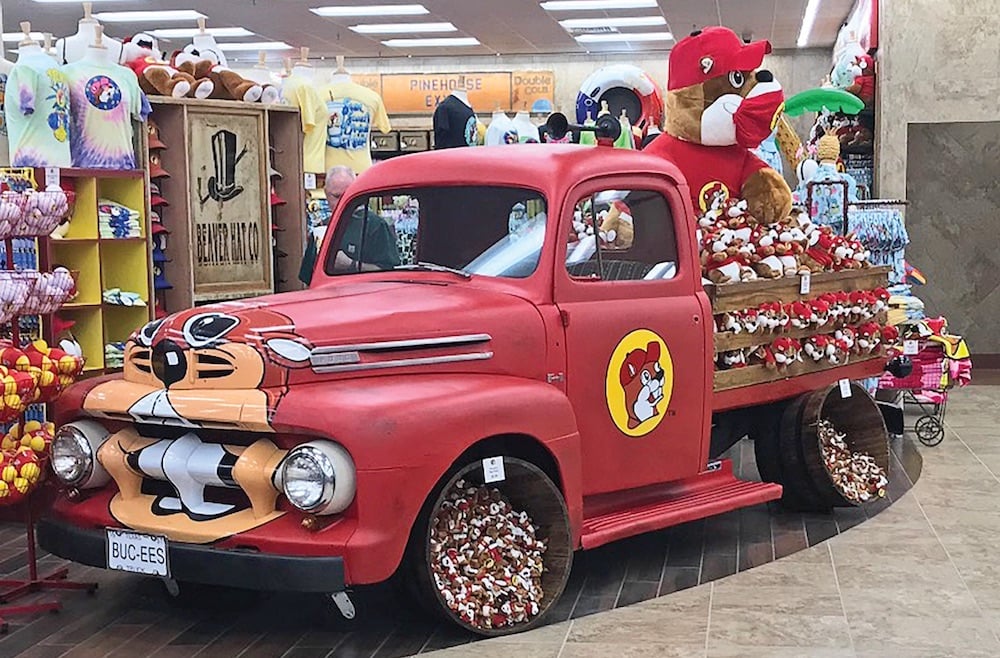 After being spotted by Buc-ee’s management at his Highway 19 shop and collection, Jimmy Cochran was commissioned to create display vehicles to use at various Buc-ee’s, the first of which is still displayed in the store in Ennis.

Jimmy Cochran’s passion gives him such a great sense of anticipation that he relishes getting up each morning.

That passion is restoring vintage vehicles, something he grew up with and continued throughout his life.

The 71-year-old Cochran was in the used car business for many years, and he turned that experience into his hobby.

“I’m semi-retired; I had a dealer’s license from 1978 to 2018,” he said. “I gave up the license, but not the love. The car collection became another business, where people either use them as backdrops or purchased them.

Cochran said he grew up around cars — especially the older ones.

“My father was a tractor mechanic by trade; we never could afford a new car, so I’ve been around used cars all my life,” he said. “I’ve always liked the old cars — I’ve had the passion since was I was a kid. I see potential in every one of them.

“When I get it in the shop, I start dragging things in that will go with it,” he said. “I’ve only had one that I couldn’t figure out what to do with, and I traded that off. I’m a hands-on guy.”

Even as a child, he had the bug. Starting out with four-wheel scooters, he began his foray into rebuilding and refurbishing vehicles.

“I had a scooter, one someone gave me when I was in junior high school. I overhauled the engine, painted it, ran it all over the place,” he said

A 1936 Dodge 500 Business Coupe park ed on his lot northwest of Trinity about 10 years ago was the key to the start of his new venture of restoring old vehicles.

“I kept (the Dodge) parked here, and it started drawing people to it,” Cochran said. “Those people would then ask me if I knew about this old car in the woods or over there in a barn, and I would go a check it out. Next thing you know, I’m dragging stuff in here left and right. 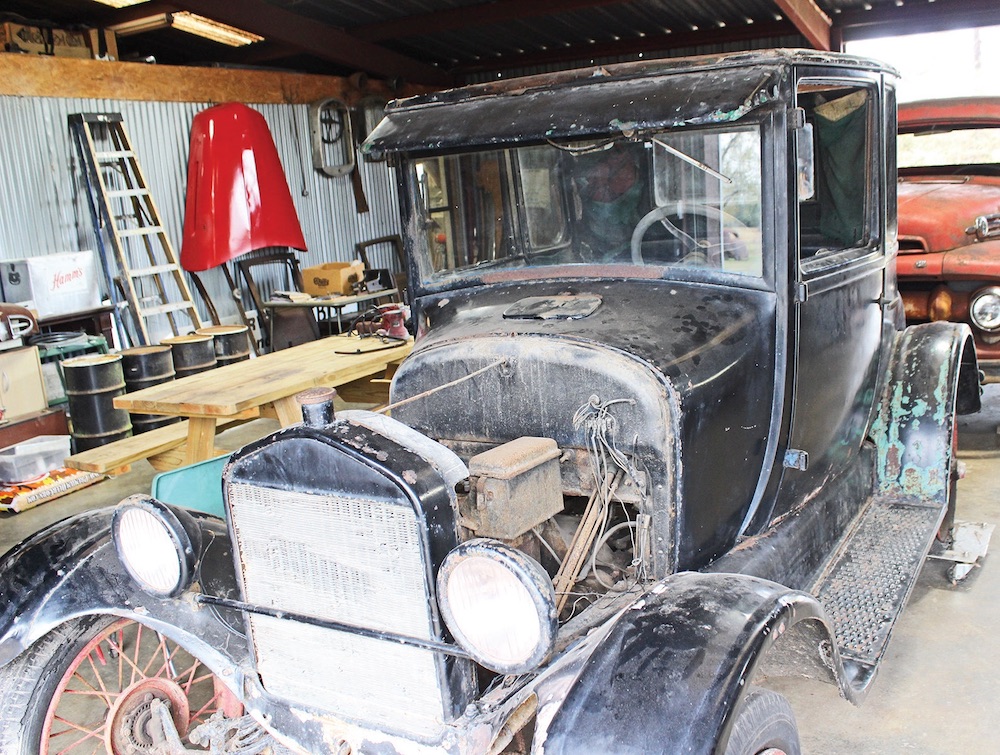 One of several projects Jimmy Cochran is working on is a 1927 Ford Model T Coupe.

“These cars are like a magnet drawing people in off the road; I have met people from other countries because of these old cars,” he said. “As a matter of fact I had a young couple in their 30s stop here, they were from Scotland. They had flown over here, got a rental car at the airport and drove around sightseeing, had a big time. They got around here, and did a U-turn and hung out with me, talking and taking pictures, and two hours later, they told me that out of all of the traveling they’ve done, hanging out with me was the highlight of their trip.”

“There’s something to love about each and every one,” he said. “I still like the old engines like the flathead V8. They’re just nostalgic — they sound bad, but there’s nothing bad about them. And it’s not just the sound, but the feel, the smell, everything.

“You won’t see anyone using the current cars in 40 or 50 years, but you can take one of these old cars out of a field, and if they’ll turn over, they’ll run.”

One of his first pieces was pulled out of a field with chin-high weeds; Cochran said he made it run again under its own power, and then started driving it to car shows. However, restoring a vehicle doesn’t necessarily mean creating a pristine piece.

Cochran prefers that many of his pieces retain the patina of rust and age, and he’ll clear-coat on top of it to preserve that look — wanting it to look like it just came off the farm. He also likes to do most of the work on the vehicles, but does hire out the glasswork and pinstriping, as well as some of the welding.

Cochran’s cars attracted more than just people, it attracted a manager with the Buc-ee’s organization who happened to be driving by the lot.

“He told me I have some stuff they need,” Cochran said. “He said they redo the old trucks to use as displays inside of a store. He looked around at what I had, and had me get together with someone who was rebuilding them. We met, and they picked out four trucks — two 46 Fords, a 49 Studebaker and a 49 Chevrolet.”

Cochran was given an opportunity to build one on his own, and he went to work. An old parts truck was on the lot, and he began work. Eight months later, when the Buc-ee’s people came to pick it up, Cochran said “his mouth flew open like a two-bit suitcase.”

The first one built is in the Ennis store, and the latest one is going to a new store that is scheduled to open in Georgia.

“They were real pleased, and told me to get to work on the next one,” he said.

Those builds, Cochran said, are not typical; the work is mostly cosmetic. There is no engine, or even axles, leaf springs or rear ends; the inside is redone, the bed and hood are repaired and painted, and the whole piece is mounted on heavy casters to allow it to be moved around.

Barrels are used to mimic wheels; those are used to house display items such as small stuffed beavers sold by the stores.

And if there’s no parts laying around, that’s OK; items such as shaving brushes, barrels, picnic tables and other items not necessarily car-related are repurposed into bed material, running boards, and even shifter knobs.

It’s a process Cochran plans to continue as long as possible.

“I like it so much I can’t wait to get in here in the morning,” he said. “I need to get out here and do something with these cars.” 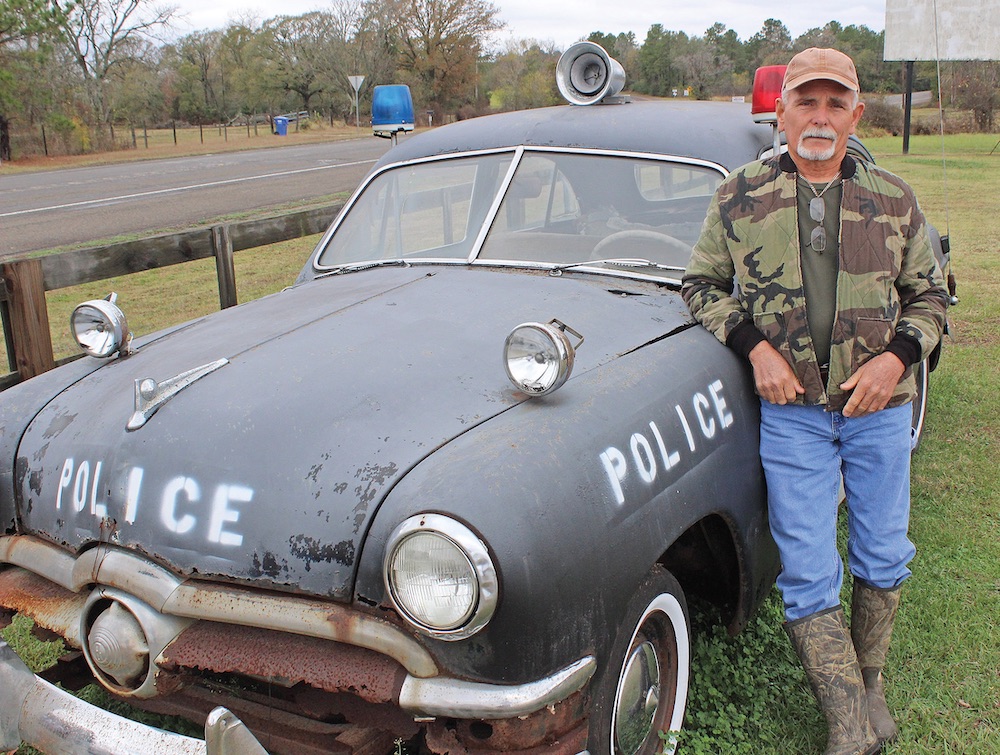 Jimmy Cochran, a longtime car dealer and a lifetime car enthusiast, has a 1949 Ford Police Cruiser prominently displayed at his lot on Highway 19 north of Trinity. Cochran has a passion for cars and trucks from the 1930s to the 1950s, and if you make an appointment, you can travel down memory lane with his antiques.