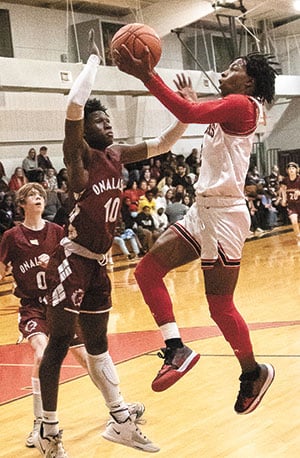 Cam Shaw-Rucker finds and opening in the Onalaska defense and takes a lay-up for two more points. SJNT staff

COLDSPRING — Top Trojan Luke Monroe said a 93-67 win over Onalaska on Friday was the end result of a 57-41 win over Anderson-Shiro on Thursday.

“The game against Anderson was a very good game, as team was focused and responding very well against Onalaska,” the sophomore guard said. “All in all, the game was one of the best we have had.”

Monroe was able to put up 17 points in the Friday game. Other top scorers include Cam Shaw-Rucker with 18, K.D. Bookman with 14 and Xzaviem Major and K.J. Harden both with 10.

“We started the game well, our focus was good, and our teamwork was good,” he said. “Mid-game we kind of lost our focus and we had to regroup a little to get back to our game plan.”

Bookman credited teamwork, three-point shooting and hustle for the win, a sentiment echoed by teammate Harden.

SHEPHERD — The Pirates lost a district game against the Splendora Wildcats 66-48 on Friday.

COLDSPRING — The Lady Trojans lost a heartbreaker to district rival Onalaska on Friday with a score 50-48.

Top scorers were Brianna Shaw-Rucker with 14 and A’lyvia Jackson with 11.

SHEPHERD — The Lady Pirates lost to Splendora in overtime 46-40 on Friday.