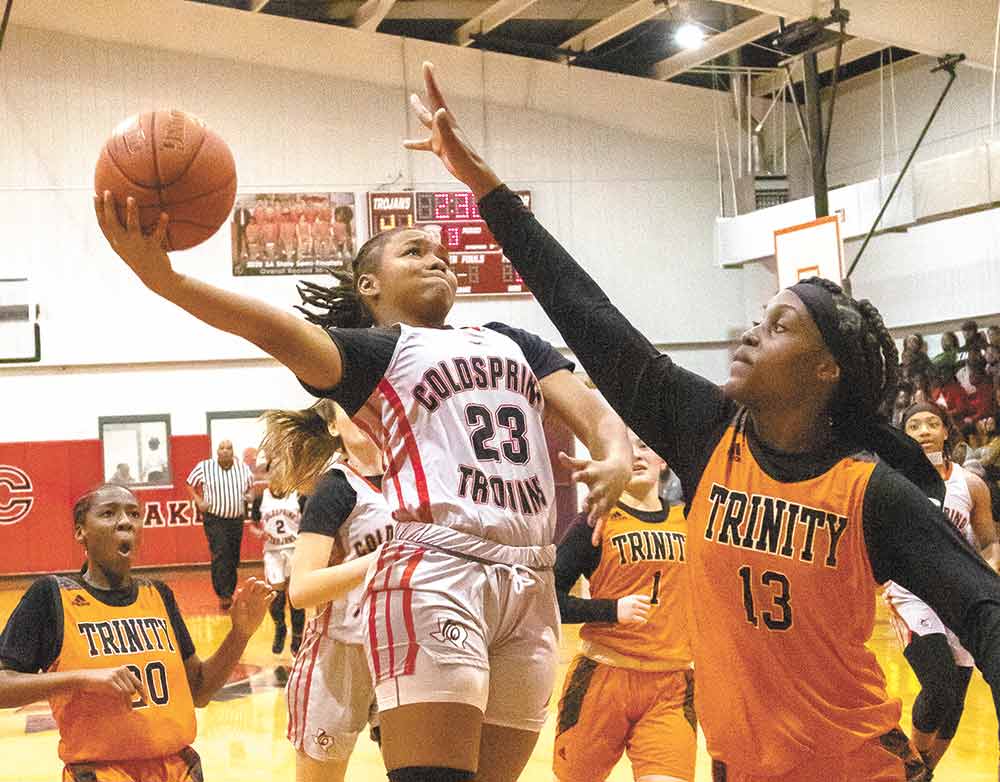 Lady Trojan A’lyvia Jackson shoots around the Lady Tigers all night long for the win.

ONALASKA — The first half was competitive in the District 23-3A matchup between the Trojans and Wildcats, but a 35-point third quarter allowed the Trojans to roll to an 89-47 win.

A field goal was all that separated the two teams at halftime.

Onalaska would hit the first bucket — a 3-pointer — to take a one-point advantage. The fun ended there for the home team. A 35-11 third period saw the Trojan press take over, frustrating Wildcat ball handlers, and allowing quick and easy points under the bucket.

“He made an adjustment to his press at halftime and made it tougher for us to get open,” Onalaska coach Nick Tyerman said of the opposition. “We tried to set some screens to get open, but they are just so fast and athletic that it is really hard to get open against that. It was a good adjustment by him and we just need to be more physical to be able to handle it. This year has been crazy because we have only been pressed full court by one other team all year. It wasn’t this good.”

The Trojans’ Cam Shaw-Rucker and Luke Monroe combined for six 3-pointers in the third quarter and had 29 of the 35 points. For the game, Rucker led with 29 points, Monroe 26 and K.D. Bookman had 13. For Onalaska, Lucas Jackson led with 11 points, Kevin Redden had 10, and Brady Smith and Bryan Wyatt had nine.

“I have to give credit to Onalaska. They came out and hit the three at the start of the third quarter and I said it was going to be a good game,” Coldspring coach Greg Devers said. “I did go over some adjustments in our press and I think our depth wore their players down. We hit 13 threes and we were shooting the lights out after not hitting anything in the first half.

“We came off a week where we played six games in about 72 hours and I think our kids had dead legs,” Devers said. “I lost two players to grades and had to bring up a freshman and sophomore. I started two freshmen and a sophomore today and it kind of showed in the first half.”

Top scorers were Monroe with 23 and Shaw-Rucker with 20

SHEPHERD — The Shepherd Pirates were overpowered by the Hardin-Jefferson Hawks 95-22 on Jan. 7.

ONALASKA — Every second mattered as the visiting Coldspring Lady Trojans pulled ahead at the end to grab a 46-44 decision on Dec. 4

The Onalaska Lady Cats looked to be in control of the pivotal district contest. They held the Lady Trojans to single digits in the first and second quarter and had a 37-28 lead going into the fourth.

However, fortunes would change, as Coldspring outscored Onalaska 18-7 over those final eight minutes. The Lady Trojans did not catch up until just 38 ticks remained. They took the lead with only 13 seconds left.

“We tried to start in zone earlier and we got into some trouble and got down by 10, so we had to come back,” Coldspring coach Thaddeus Gordon said. “Their game is pick and roll, so I knew we would have to play man in the second half. We played with way more effort (in the second half). At first, we started playing less physical, but in the second half, there was more effort.”

The Lady Trojans are now 1-2 in district play.

“We got the win at the right time,” Gordon said. “We were tied in last with two teams. They put the strong teams (at the beginning), so we are pretty much on the back end. We needed this badly. Onalaska was picked to win the district, so this is a really big win for us and I am proud for them. I hope this is a confidence game to take us to Trinity at home and we can go from there.”

Shaniya Goffney led the Lady Trojans with 19 points in the win, while Brianna Shaw-Rucker and A’Lyvia Jackson had 10. Ella Phillips had 21 rebounds.

“Coldspring came out and wanted it a little more than we did at the end,” Onalaska coach Ashley Sustaita said. “Our mindset, we have been struggling with it, and our leadership, we don’t have that person to take over a leadership role. We’re lacking a vocal leader with the urgency to win.”

On Friday, The Coldspring-Oakhurst Lady Trojans beat the Trinity Tigers 61-38.

Top scorers were Jackson with 27 points and Shaw-Rucker with 13 points.

The Shepherd Lady Pirates lost to Hardin-Jefferson on Jan. 7.

On Jan. 4, Shepherd edged out the Splendora Lady Wildcats 41-34.