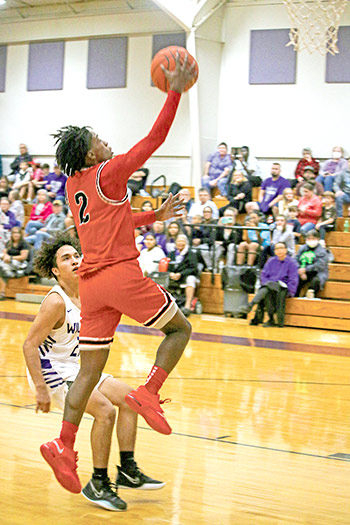 The marquee game of the Big Sandy tournament did not disappoint, as Coldspring and the tournament hosts battled to a 53-51 finish Thursday in the opening round.

The Trojans used their length and quickness to press the Wildcats and cause several turnovers. Big Sandy countered with tough defense and timely passing to keep pace.

“Coach (Kevin Foster, Big Sandy) and I talked about how this was the championship game of the tournament,” Coldspring coach Greg Devers said. “My kids came out disorganized. My freshman, Bryan Douglas hit the two big 3’s (one with a free throw) for seven points. With three freshmen and a sophomore out of eight players, I thought we did pretty good. Big Sandy -- we have been averaging 89 points a game and they held us to 53. That is unusual.

“Like I said, I think that it was the championship game. I hope it was. Our quickness and our defense got us there at the end. We’ve got to do a better job blocking out, but we will get there. We are going to learn. We are 4-0 right now. Tomorrow we play Groveton and we have already beaten them 86-22. I knew this was going to be our first real test of a game. The first three games I knew were games that we should have won. I was hoping to play Big Sandy on Saturday at 5:30 p.m. (championship game).”

The Wildcats and Trojans traded leads and the game was tied at 51 until Luke Monroe got a defender in the air and dumped a pass to Chris Harden, who hit a five-foot jumper with just 10 seconds to go. Coldspring was able to force a difficult shot at the elbow in the final seconds to preserve the win.

“We didn’t deserve to win. I am pretty much brutally honest with the kids,” Foster said. “Sometimes you don’t do enough. We turned the ball over too much, we couldn’t get stops when we needed to and we had a lot of opportunities. We battled back and kind of got ourselves into a hole. I was proud of the kids for how we fought back, but we just kept shooting ourselves in the foot with mistakes that we shouldn’t be making.”

Monroe led the Trojans with 17 points and Cam Shaw-Rucker had 13. The ‘Cats Seth Beene-Williams had 17 points as well, Thompson had 13, Criswell had 11 and Kaden Foster had eight.

“This was a tough one,” Foster said. “We’re trying to figure some things out position-wise with who can play what. When you play those pressing teams, you find out a lot about your team. It is good to play teams like that, because it gets you better and prepares you for what you’re going to see down the road. We definitely have a lot of room for improvement.”

On Saturday, the Trojans downed Splendora 67-53; and on Friday, Coldspring downed Groveton 99-13 and then Trinity 73-56.