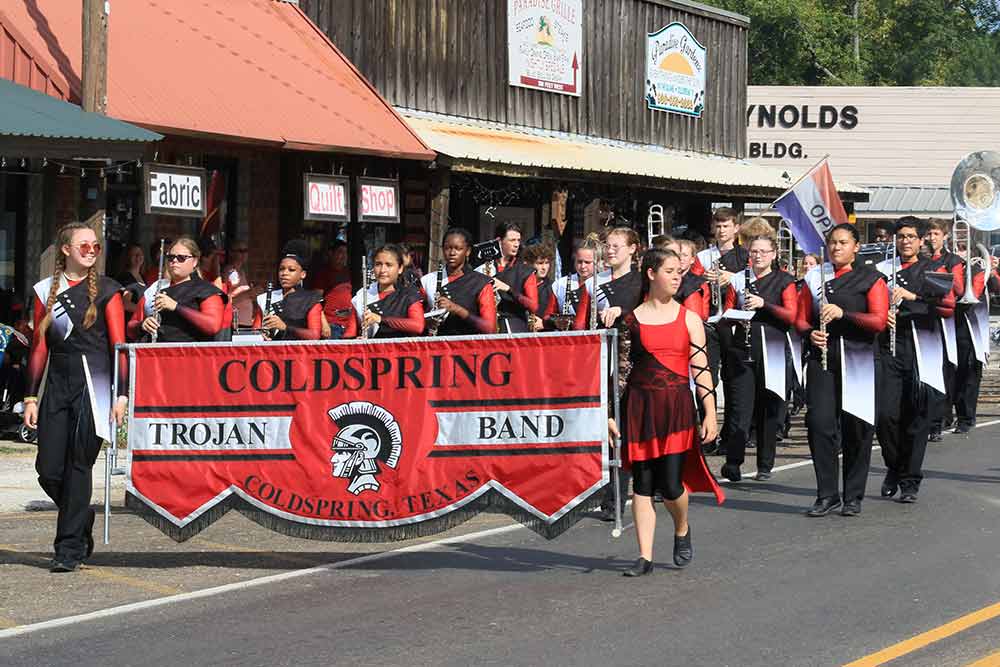 The Coldspring-Oakhurst Marching Band fills the air with music.

COLDSPRING — While the cooking and check-in portions of the San Jacinto County Fair and Rodeo are in the books, events and contests still go on.

County youth will shoot for the top, and top dollar, and it all comes to a head Saturday with the Youth Auction. 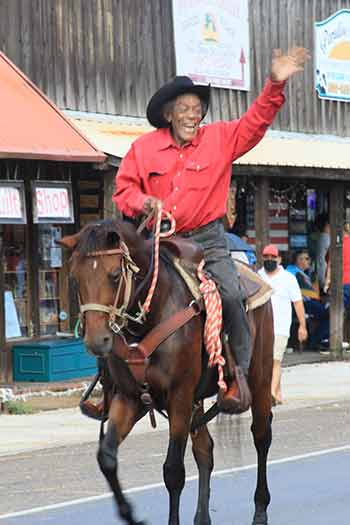 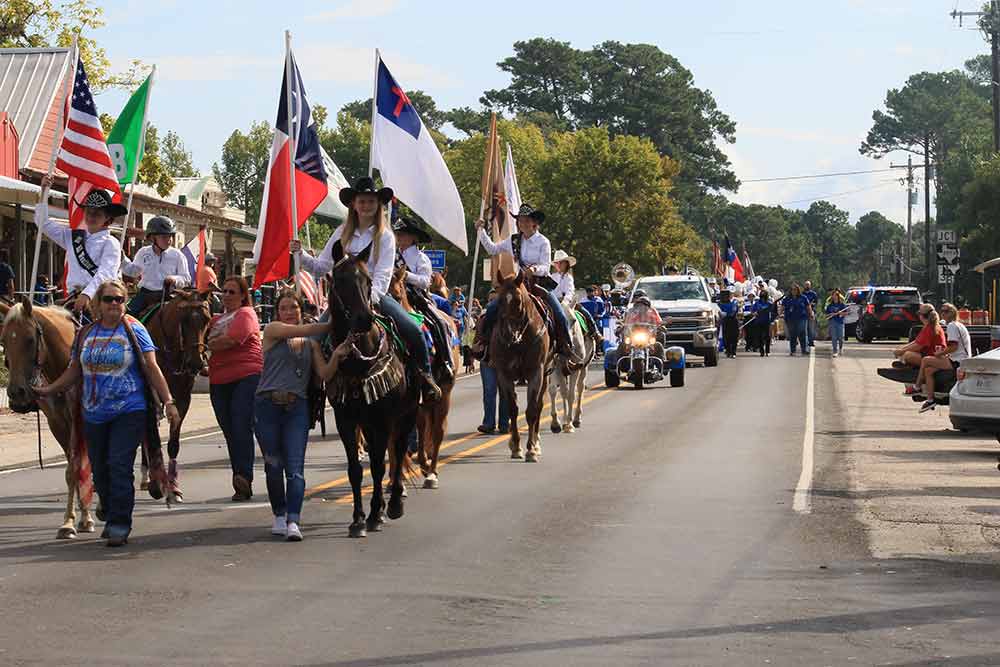 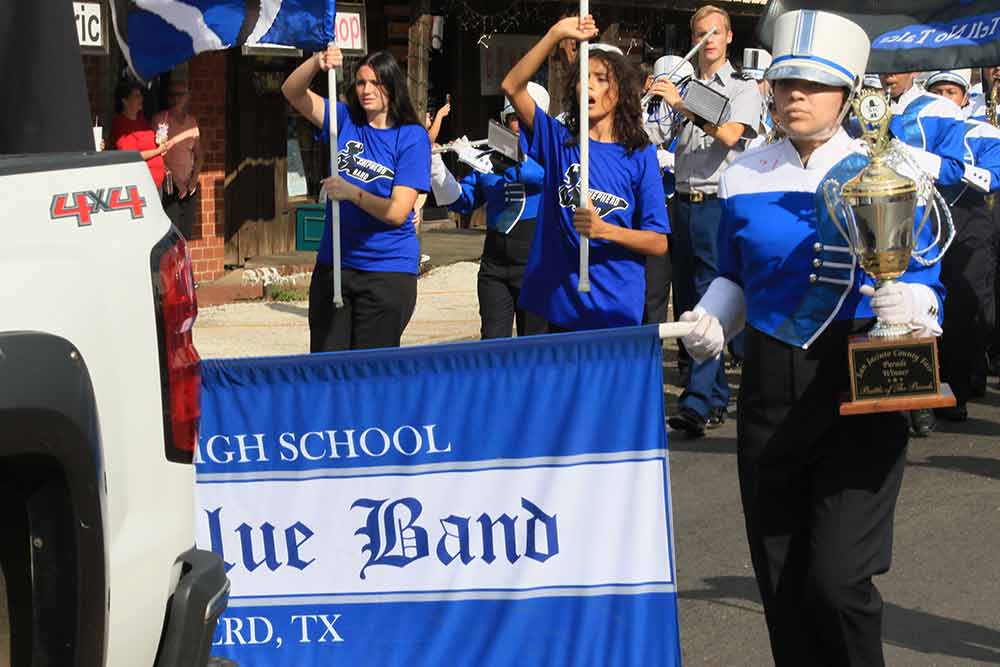 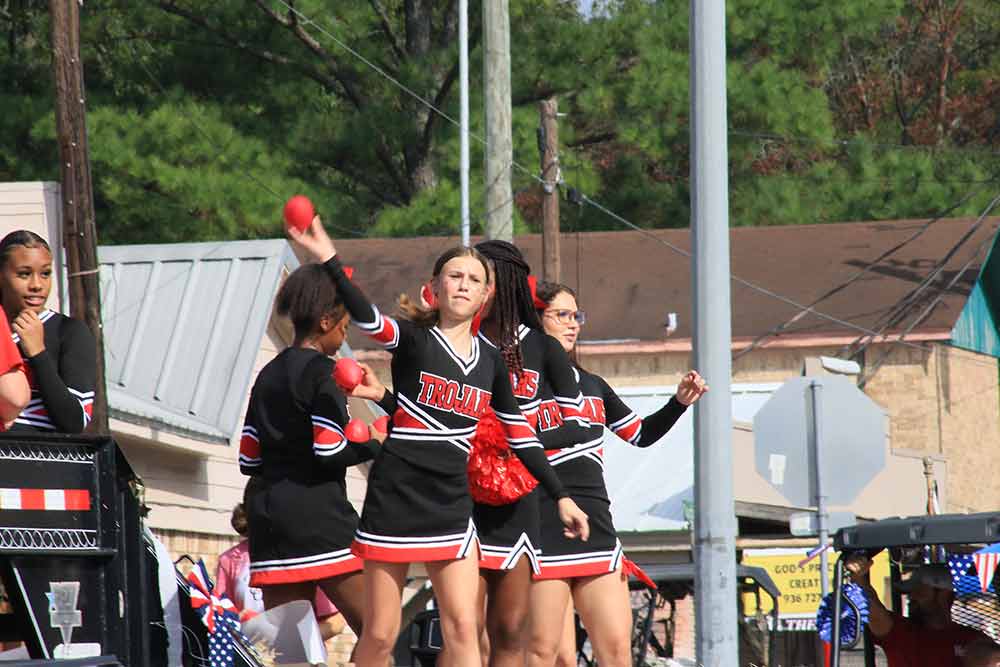 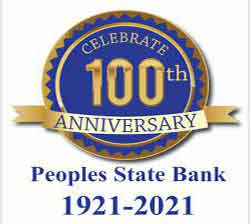 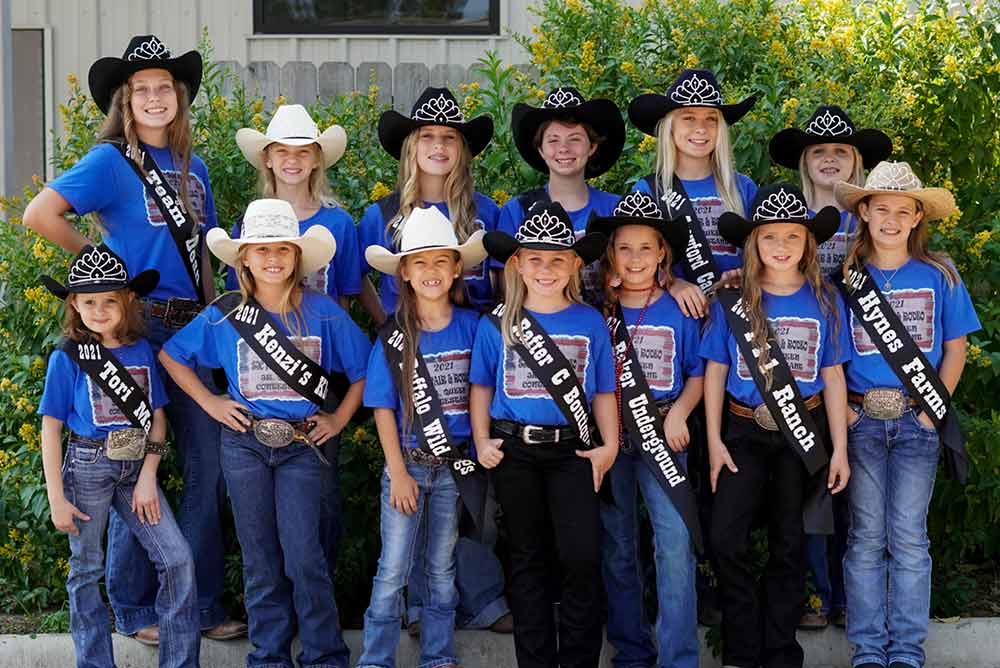 COLDSPRING — Numerous events are planned for the 74th annual San Jacinto County Fair, including a perennial favorite, the Queen Contest.

The 2020 SJC Fair and Rodeo Queen, Tori Matthews, will crown the new Queen from the following contestants: 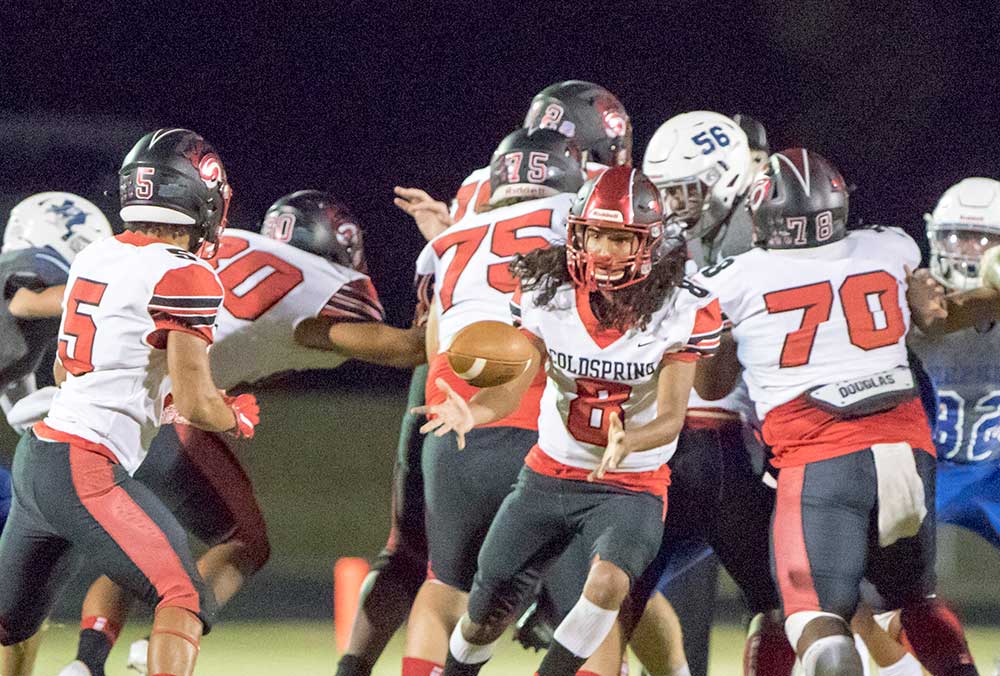 Coldspring quarterback Luke Monroe (No. 8) looks for the pitchback during the 18-14 Coldspring loss to Shepherd in the battle of San Jacinto County. (Charles Ballard Photos)

SHEPHERD — The Pirates won the “Battle of San Jacinto County” on Friday by downing the Coldspring Trojans 18-12.

Coldspring put the traveling trophy on the bus with the expectations of bringing it back to Coldspring, but the Trojans missed an entire week of practice due to problems with COVID and were not as sharp on the field as previous games.

Shepherd Head Coach Miles Robison said It was a heck of a game. 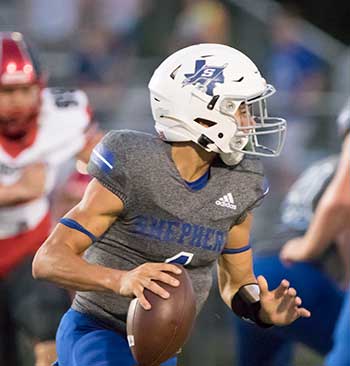 H.D. Green, (No. 1), Junior QB for the Shepherd Pirates, looks down field for an open receiver during the 18-14 victory over the Coldspring Trojans.“We’re just glad we came out on top,” he said. “It could have gone either way, but came down to the final tick before determining the winner. This is the way the Battle of San Jacinto should be played every year. It was good to play quality opponents and see how we would stack up against schools that are similar to us on size.”

Coldspring Coach Ken Stanley said he was very proud of his kids overall.

With only minutes off the clock, Shepherd Pirates QB H.D. Green slid off the left tackle of the offensive line and scooted through the backfield of the Coldspring Trojans for the first TD of the night.

The Trojan Defense just could not keep their focus on the quick-moving offense of the Pirates, and the first quarter ended on a 12-0 score. The Trojans put up their first points with at the 5:46 mark in the second quarter, and the score was 12-6 Pirates at the end of the first half.

The Trojans grabbed their only lead of the game with 2:05 on the clock in the third quarter with a score, putting them up 14-12. Then with 7:42 on the clock during the fourth quarter, the Pirates managed to push across the goal line one more time to push their lead to 18-14.

The Trojans were marching down the field in order to take the game and the win when the Pirates managed to cause a turnover and the Trojans could not stop the Pirates from running the clock out.

“I think it just came down to us not turning the ball over and eliminating some of the penalties,” Robison said. “We still have a lot to work on but the effort was great all night.”

The Trojan offense was led by Easton Dean with 95 yards on 17 carries and 2 TDs, followed by Eddie Brown with 88 yards on 15 carries, and Luke Monroe had a 2-point conversation pass to Rickey Lewis.

The Pirate offense was led by Green with 150 yards and 2 TDs. Preston Stephens added another TD.

Robison said the Trojans play in Liberty on Friday, a team that runs the same offense as Coldspring.

“Their defense has been very good this year,” he said. “Looks like it could be a very wet week, but we will prepare the best we can. I also believe that Coldspring and Diboll will be playing for a District Championship on the final week for their district.”

For Coldspring, the Tarkington Longhorns will host the Trojans. The Trojans should be favored to win this game, by double digits, if they can stay healthy and have a good week of practice. The game is scheduled for a 7:30 start on Sept. 17 at Tarkington High School Stadium. 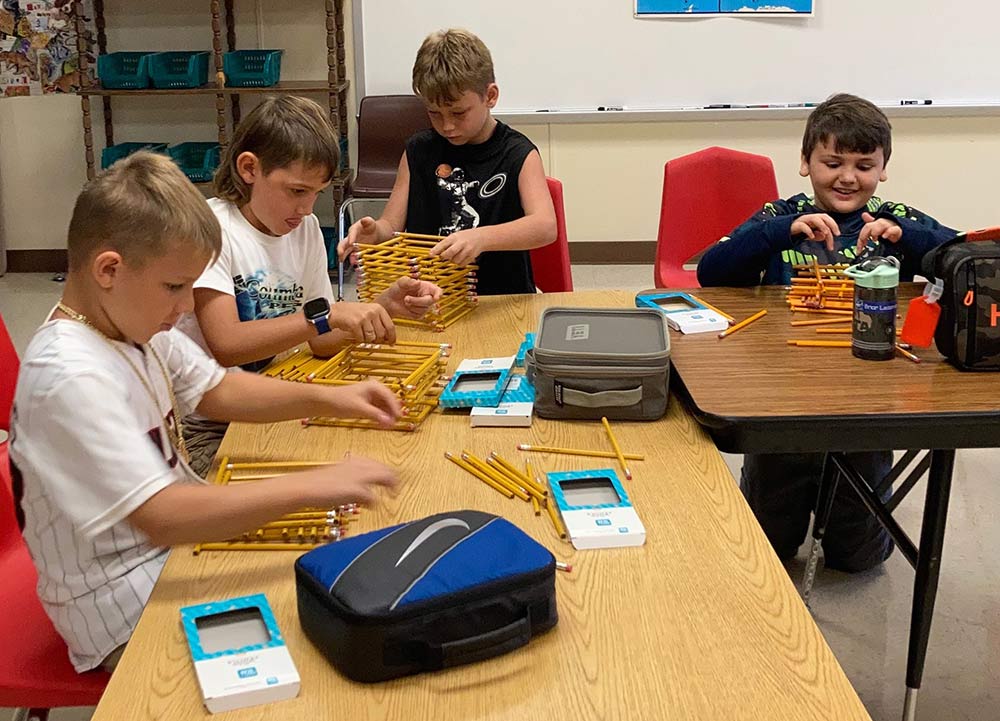 The final assignment of the Tower Project involved students working together in groups to build their own towers out of pencils using the information they had learned. Shown from left are Mark Romagus, Stetson Faulkner, Landon Lane and Briar Leasman. (Photos by Courtney Bailes)

The Tower Project was a multi-level learning adventure that engaged students with fun activities even as they investigated and converted heights, created word problems, and geographically mapped skyscrapers around the world.

The final assignment of the project involved students working together in groups to build their own towers out of pencils. The team of Mark Romagus, Stetson Faulkner and Landon Lane created the winning tower with a height of 37 inches.

"It is fun to turn students loose with a facilitated task and see where their own creativity and imagination takes them," Bailes said. "It's even more rewarding to see them proud of both their independent and collaborative ingenuity." 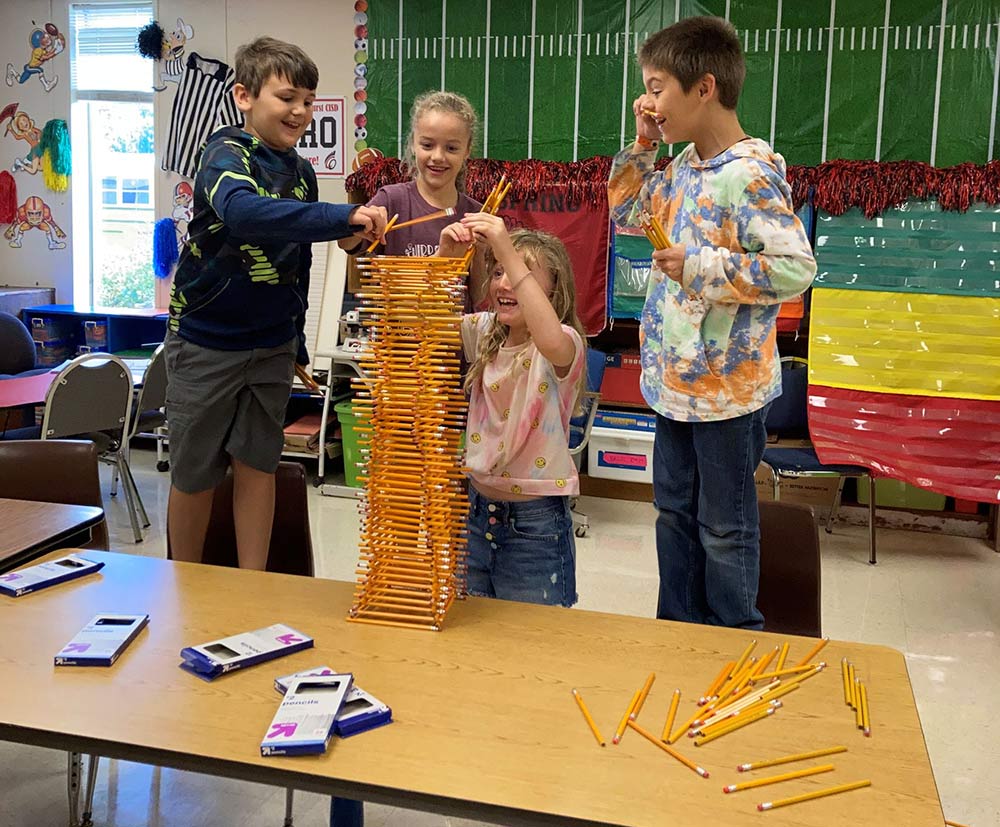 Coldspring Intermediate students reached new heights as they worked together to build towers out of pencils as part of the Tower Project in their third-grade GT class led by Courtney Bailes. The project engaged students with fun activities even as they investigated and converted heights, created word problems, and geographically mapped skyscrapers around the world. Shown from left are Briar Leasman, Evelyn Sanchez, Paisley Simmons and Aidan Sheyn. 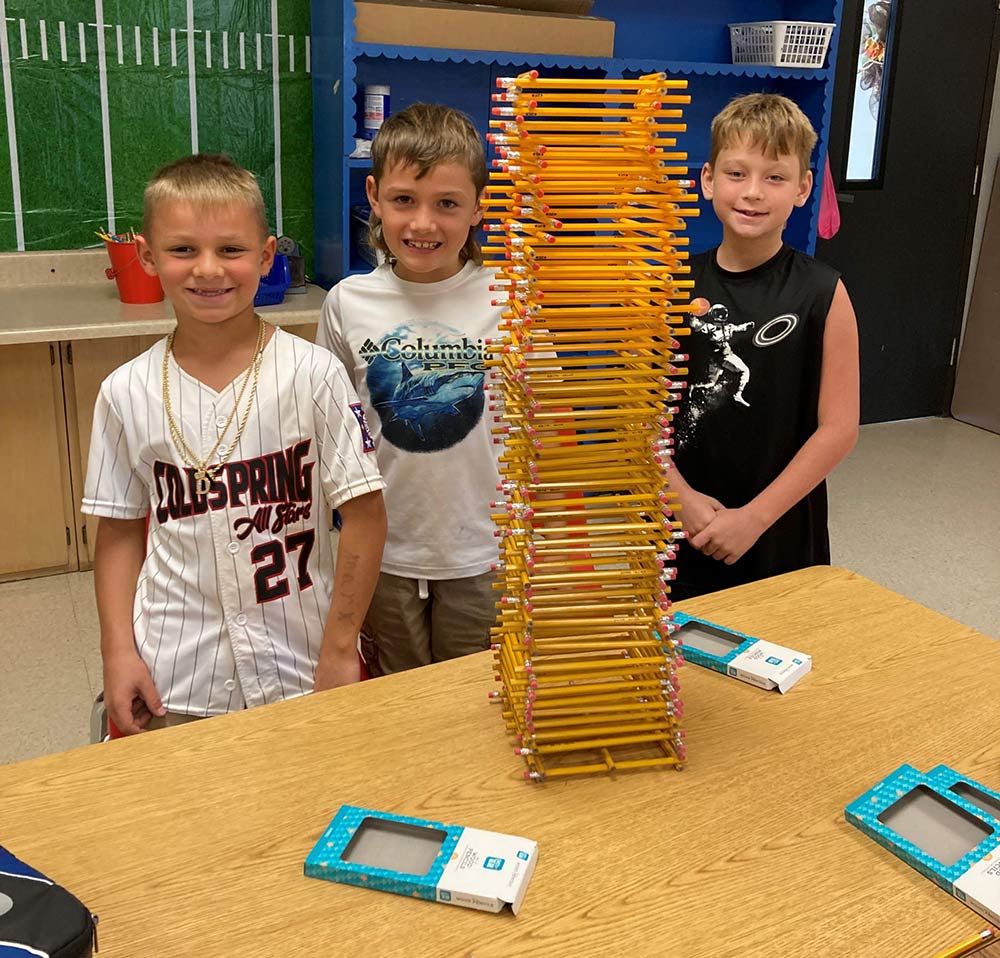 The winning team of the final Tower Project worked together to build a 37-inch tower of pencils. Shown from left are Mark Romagus, Stetson Faulkner and Landon Lane.