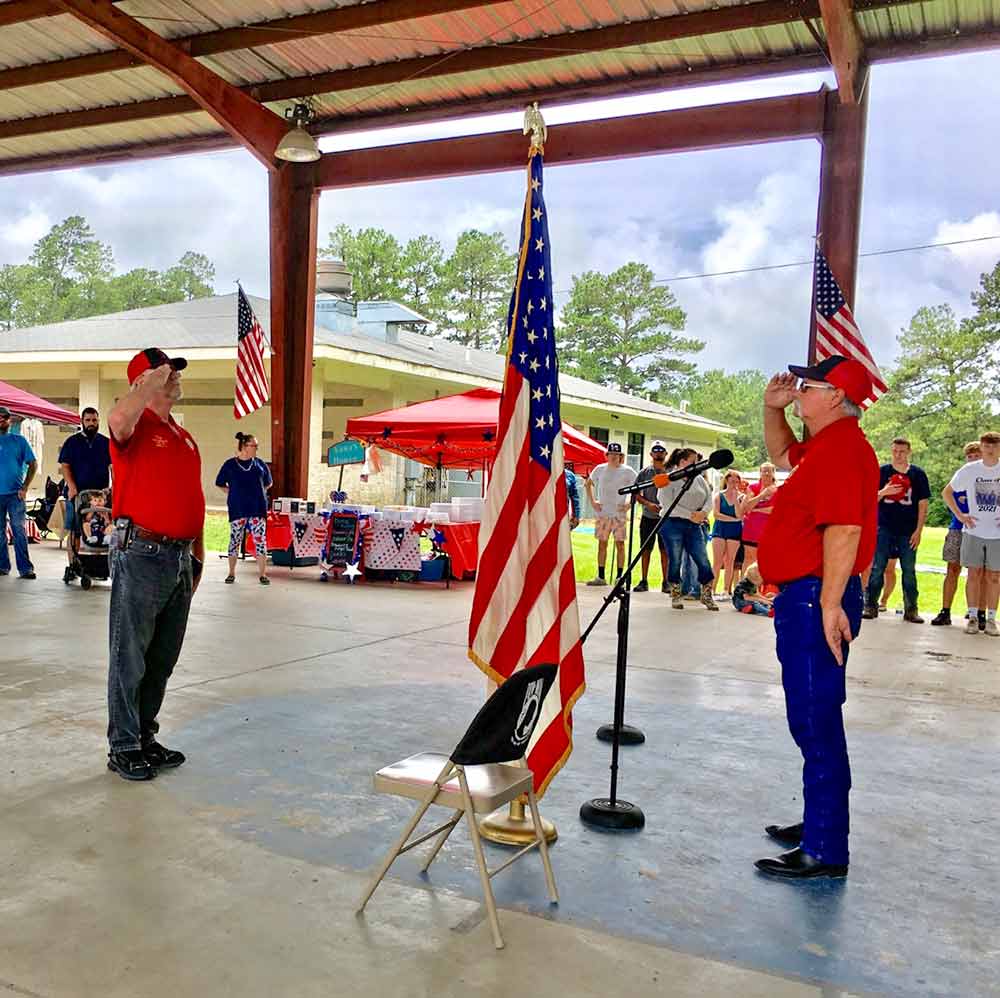 American legion post 629 salute the flag and the empty chair for those heroes who did not return. (Courtesy Photo)

Editor’s Note: The following story is being run in its entirety as part of it was inadvertently left out of this week’s edition of the San Jacinto News-Times. The SJNT regrets the error.

The Independence Day celebration in Shepherd on July 3 was a big success. We were blessed when it did not rain.

Surprisingly it was forecast to rain for most of the day and although it rained close to us, we were not rained upon. Humidity was high but everyone enjoyed the volleyball and cornhole tournaments. The latter continued late into the evening and we are grateful to the City of Shepherd for working on the overhead lights, and for Commissioner Donny Marrs for loaning us his portable Lights.

The event opened with the American Legion Post 629 performing a Flag Ceremony in which all who fought for our freedoms were honored, especially those who did not return. This was symbolized by a salute to an empty chair.

After the National Anthem, Mayor Charles Minton addressed the crowd, welcoming them and remembering the event was one of celebration and also of remembrance. I was happy to speak a few words and very glad to see many people had come out to join in with our games, contests and excellent vendors.

We had face painting, enormous funnel cakes and a great menu from Sherrie’s Food Truck. Nana’s House was new to Shepherd but we hope she will join us again. Her cakes were delicious. Watermelon slices were free to all, curtesy of Commission Donny Marrs and Fierce Nutrition brought their superb drinks to the event.

The corn hole tournament played on into the night.

American legion post 629 salute the flag and the empty chair for those heroes who did not return.

Bruce of Body by Bruce demonstrates a self-defense maneuver.

DJ and MC Joe LaBlanc with Mrs. LaBlanc did a wonderful job.

Winner of the best patriotic dress for a pet.

Fun in the sack race.

Bruce McKinzie gave a demonstration of self defense showing how to get rid of someone trying to pull anyone, be it a child or woman, against their will. Bruce, who is this month’s Shepherd’s Business of the Month, owns Body by Bruce and teaches Jiujitsu in the Gracie Relson method. He is starting a class for self-defense for women this month. Call him at (281) 387-8782.

The Hula Hoop and Sack Race Contests were fun to watch and the tug of war was a blast. There was a water slide for the little ones and a tiny pool for the even smaller ones. All of this was accompanied by music from DJ and MC Joe LaBlanc, who performed well into the night.

Of course there was a fabulous firework display. It lasted longer than 20 minutes and was a great way for many of us to end the day. Those cornhole players kept on going after the fireworks.

I must commend most of all Brenda Myers, who worked so hard to help make this day a success. Brenda, with Walterine Carr, organized the volleyball tournament and the cornhole too. Brenda arranged for the trophies and medals for all the games and worked hard to make this day go so well. The Impact Center volunteers turned out too to help with everything and the teenagers there were happy to help gather up any garbage lying around.

Both Bruce McKinzie and Brenda Myers, as well as Walterine Carr, are board members of Shepherd Chamber, which was the host for this annual event. The City Council graciously votes to pay for the fireworks, which cost $5,000. The Chamber found out years ago that to have fireworks on the actual July 4th would triple the cost. So, we always have it just before the day.

Our next big event will be Christmas in the Park. Coldspring Chamber's next big event is the Wolf Creek Car Show on Oct. 16-17 in Wolf Creek Park. This event is well into the planning stage and vendors who wish to sell at this show should contact the Chamber.

Chambers of Commerce are here to help businesses, encourage tourism and organize community events which in turn increase business and tourism.