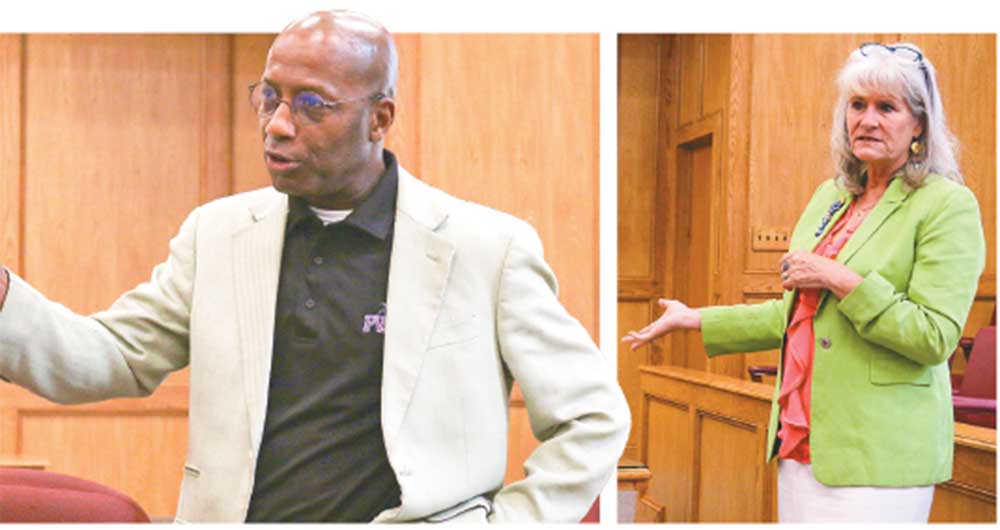 Polk County-A group of potential business owners were provided information and insight from financial and political leaders at the Minority Entrepreneur Information Session held Thursday in the Polk County Courthouse.

Local resident James Dunn organized the meeting and said the idea behind it was economic opportunity for the community.

“It is just to push our community forward,” Dunn said. “It is ownership and business and the opportunity. I thought it was important because I want our community to know that we can succeed and we can build our own community with business and we don’t have to depend on anyone else to be successful. We have it within ourselves to do for ourselves.”

The meeting began with a businessman who had been laid off from a job held for a dozen years. Wondering where to turn, he began his own business in the food industry and has found success in the town of Timpson. He told of his successes and vexing moments starting the new company.

State representative James White had a message of preparation and having businesses ready for when the economy pulls out of its current slump. He spoke about talking with a friend in business who had told him there will be bargain-basement opportunities once the economy recovers.

“I drive around my district and I notice a lot of talent,” White said. “People are doing things with wood or making tables or making art and it is just fabulous. During holiday times, these folks, instead of making one cake, they are making 15 cakes. I remember about this time five years ago I was in a meeting sort of like this with a group of pastors in Jasper. What if you started capitalizing on that talent? I talked to them about the tax code and the tax code — believe it or not — really favors people that are in business, because you get to write off.”

White encouraged all to pursue a DBA (Doing Business As), which Polk County Judge Sydney Murphy explained could be obtained at the clerk’s office. He also encouraged all to go to the governor’s economic development webpage.

Among those in the audience were entrepreneurs interested in beginning businesses in food, fitness, a nonprofit and a barber.

Corky Evans, president of First National Bank of Livingston conveyed the message that banks in the area currently need loans.

“That’s what we do,” Evans said. “We need to make loans. Small-business loans — I think — are the foundation of community banks. The most important thing that you are going to need is a plan. In that plan, you need to have your market, your research, your resumes your ownership group and experience, what kind of funding you are going to need, or if you are going to buy a building or lease a building. That should be in your plan.

“You need to put together some financial projections, because if you come to see one of us, we are going to ask you the same thing. The first question is going to be, ‘How are you going to pay for it?’ You need to include that in the plan. We both need to make loans and we will take your plan and work with you to fine-tune that or expand it to do what we need to do to get to a point where it can work for both of us.”

The president of the town’s competing bank echoed those thoughts and added that projections and budgets should be reasonable.

“You want to be conservative on your estimates because you don’t want to think you can just open the doors and people are just going to flood in,” First State Bank of Livingston’s Robert Sebaugh added. “Be ready to grow and grow slow. It would be great if it grows fast, but just be honest with yourself.

Sebaugh said that those starting businesses should be familiar with their field and know what to expect as related to growth.

Both presidents also said those looking to go into business should have somewhere between 10-20 percent of their own capital to begin a new venture.

Murphy said statistics show anytime there is a recession economically, whoever is positioned at the front of the recovery is more likely to experience success.

“Even if you just position yourself and are taking baby steps, when the economy comes back, you are going to be ready as opposed to people who have been sitting back and waiting,” she said. “You have to create the opportunity and be ready to spring forward.”

Dunn said there are additional gatherings planned for the future, with a focus on implementing plans and pushing the idea of new businesses forward.