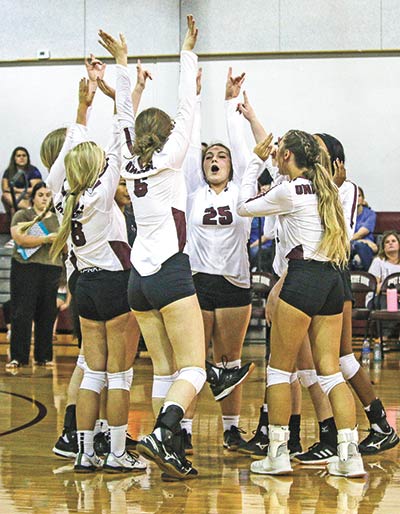 The Onalaska Lady Cats prepare for the game.By Brian Besch
This email address is being protected from spambots. You need JavaScript enabled to view it.

“It has been a struggle a little bit, just finding pieces that fit where they are supposed to be. Tonight is the first time they have looked that good this season so far.” 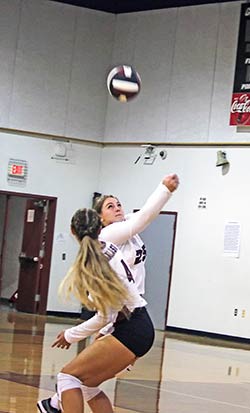 Kenadi Houser (25) passes to a teammate.To hear new Onalaska head coach Connor Nichols, one may not expect much from the Lady Cat volleyball team. However, expectations are high, as the spikers by the lake are now 5-2. It matches their win total all of last year just eight days into the 2021 season.“With that, it showed me that we have a lot of potential and a lot to look forward to this season. Keori Perry, that is the most production we have had out of her all season kill-wise. Our passing was on from everybody and that was the best setting performance that we have had all season. Just all around, it was a good performance from everybody.”In the first game, the Lady Cats came back from down six to make it a one-point difference at 22-21, but could not catch Latexo, now under the direction of Greg Horn.

They let a lead slip away in the second, but regrouped to get their first win of the match. A large lead in the third made for an easy victory, and they then came from behind to win the fourth convincingly.

At this point in the season, Nichols said Autumn Adams, Kaleigh Park and Perry have stood out as top performers. However, she is optimistic about the entire squad.

“I think we are going to be pretty good this season. I love that they come out every day and they want to work and want to put in the effort. We are struggling with the chemistry part of it a little bit. That is a new coach and all of that, so we have to work that out. After that, it is moving in the right direction, I think.”The Lady Cats will next travel to take part in the Leon tournament. They will not return home until Sept.3, when they host Caney Creek.