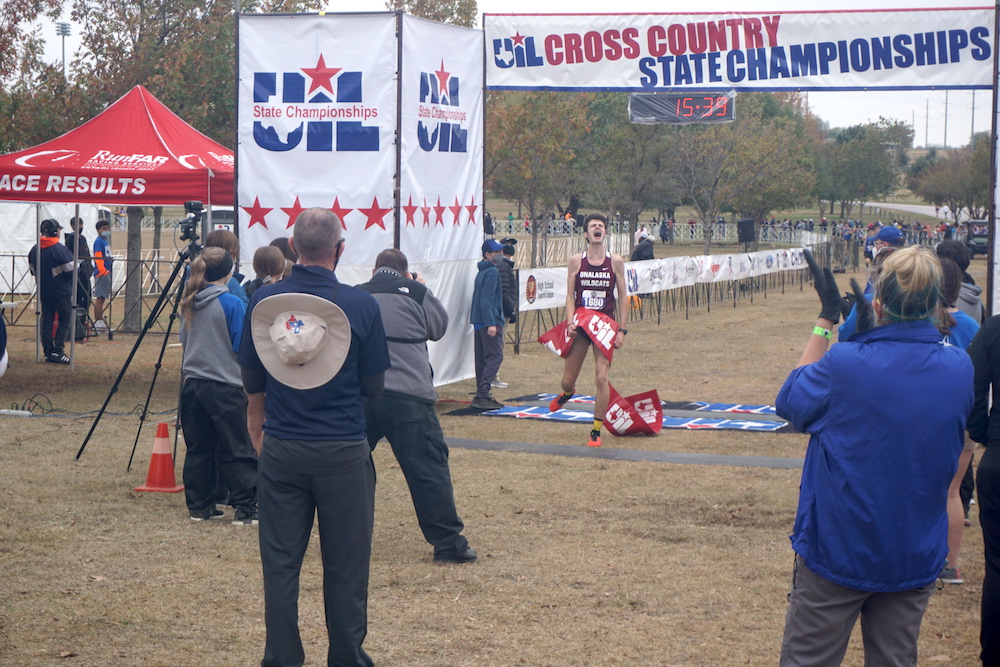 JASON CHLAPEK I PCE Onalaska senior William Boyce was the first runner to cross the finish line in the Class 3A boys state cross country Meet on Monday, Nov. 23, in Round Rock. The new state champion finished the race with a season-best time of 15 minutes, 38 seconds.

ROUND ROCK – William Boyce had a trio of goals in mind going into the 2020 cross country season.

The third goal was to win a state championship. Check.

“During the whole race, everyone was staying in a pack and I was a little scared to be honest because I know the guys here are just as fast as I am,” Boyce said. “But on that last corner, I was digging deep and I had all of these people here supporting me so I wanted to bring home a gold medal for them. I thought about my family during that last portion of the race and I didn’t want to disappoint them so I gave it my all. My legs were burning at the end, but it was worth it.”

Now that Boyce completed the triple crown of cross country – district, regional and state championships – he'll be gunning for a quadruple crown in track and field. He competes in the 1,600 and 3,200-meter runs in track.

“I have to go do the same thing in track – win district, area, regionals and state in the mile and two-mile,” Boyce said. “I think it’s an amazing goal that I set this year and the fact that I accomplished it means a lot to me. I’ve been here four years and decided this was the year I could do something and win the gold.”

Boyce was not the only Onalaska runner who participated in Monday’s state meet. Fellow senior Brady Neuman completed the race with a personal-best time of 17:15.78.

“I was hoping to run a sub-17, but it didn’t quite happen,” Neuman said. “I’ll take what I can get. I felt good and this is a beautiful course. This was a lot of fun. This gives me good motivation going into track and field season.”

Like Boyce, Neuman also competes in the 1,600 and 3,200-meter runs in track and field. He broke down how his times would be beneficial in track.

“My first mile was 5:10, which is close to my PR in the mile,” Neuman said. “I was about an 11-flat in the two-mile mark, which would be a PR. If I PR on a cross country course, I should do well on a flat track surface. My goal for every meet is to PR, but this was my last cross country meet so I was definitely swinging for the fences. I’m satisfied with what I did.”

In addition to qualifying for state, Boyce and Neuman led the Onalaska boys cross country team to its seventh consecutive district championship on Oct. 29 in Anderson. Neuman also participated in his second straight state meet on Monday.

Goodrich senior Joacxi Garzon competed in the Class A boys meet Monday morning and finished 23rd with a personal-best time of 17:23.32. He competed in his third consecutive state meet.

“I felt like I ran my best,” Garzon said. “I had a pretty good race and left it all out there.”

Garzon also had some motivation Monday morning. His older brother, Isaiah Garzon, was there to cheer him on.

“Isaiah told me that it wasn’t my first time running out here and I know what to expect, so focus and give it all I have,” Garzon said. “My main focus was to stay up with the pack when I ran and keep a good pace.”