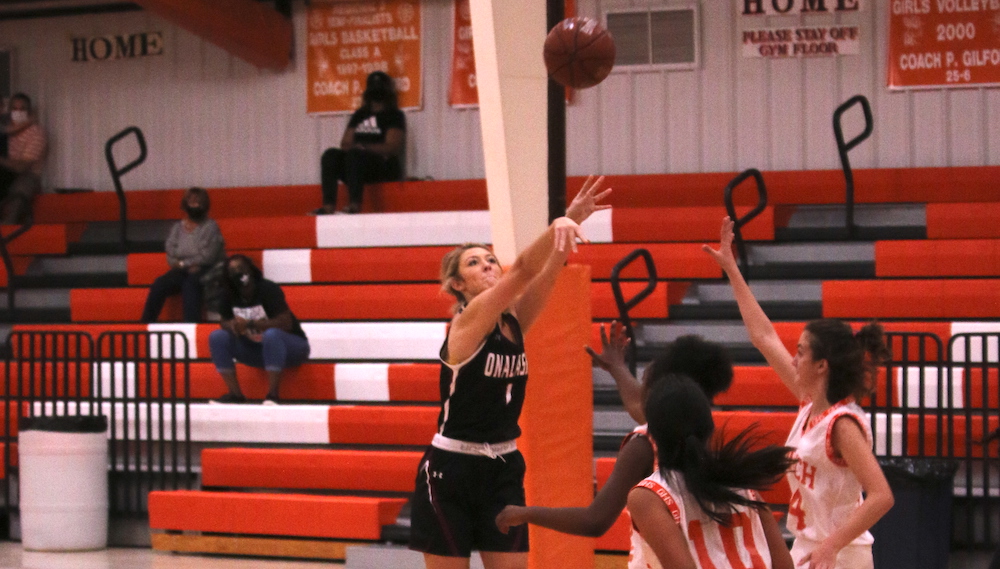 The Onalaska Lady Cats used a few different presses to leave Goodrich with a 71-15 victory Friday over the Lady Hornets.

Behind 23 points from Kierra Anstee, 14 from Kylie Sisk, and 12 by Jordyn Shutter, the Lady Cats won a game that was never in doubt.

Onalaska opened the contest with an 18-0 advantage, picking off passes and tipping the ball away from Goodrich dribblers. By halftime, the Lady Cats were on the positive side of a 38-4 lead.

“We are 2-1. We've lost a heartbreaker at Pineywoods (Christian Academy),” Onalaska head coach Ashley Sustaita said. “We were up with 20 seconds to go and turned the ball over twice to let them tie it and then let them take the lead. To be in a game this year with a great opponent — it's a good feeling. It's one of those losses you're not even mad at because, looking at last year, we weren't even supposed to be in a game like that. We have a deep bench and a lot of good talent.”

Sustaita has 11 players to deploy at any point, and was able to rotate five new faces in at a time, while Goodrich was forced to play its same five the entire game.

The Lady Cats should rely on defense and a few different looks defensively in the 2020-21 season. On Friday, both a full-court and half-court press gave the opponent trouble.

“We want to run and we want to press. We've been working really hard on the rotation and we have a couple of other things we've been throwing in as far as the press,” Sustaita said. “I think our speed is going to kill. We've been able to run teams into the ground pretty good, so I'm excited.”

The Onalaska coach believes small details such as transition defense, blocking out and consistently putting the ball in the basket will be what the team needs to work on before district play.

“We put in a lot of specific drills that I think are paying off now,” Sustaita said. “They are able to knock it down and do a good job of not getting down on themselves when things aren’t falling early.”

Goodrich was led by Breya Passmore, who scored seven of her team’s 15 points. Jamya Garrett and Aralyn Angel each added three points. The team played its best basketball in the fourth quarter, where a winded bunch was able to score in double digits.

“We have to keep working and it is a whole different level now from junior high,” Goodrich coach Khadijah Carter said of her baby bees. “We have to learn that.”

Carter has a monumental task of developing four freshmen, a sophomore and, as of now, no bench. The team just ended a successful cross country season and has yet to practice with all five team members.

“Really, we're just working on offensive plays and we are running a 2-3 zone,” Carter said. “We have to stretch that zone as much as we can, and I am thinking about going to man. It is a little difficult right now and not being able to practice with a full team has been tough. Once I get at least a full week with full-team practices, we should be OK.”

Playing every minute, the Lady Hornets will be in good shape quickly. Those who may not have participated in cross country before are getting the same impact now.

“If anything, we are going to be in shape and a fit team. By the end of December — and we start district in December now — I think by then we will have it,” the Goodrich coach said. “We have to. I will have it right and we will be a more developed team.”