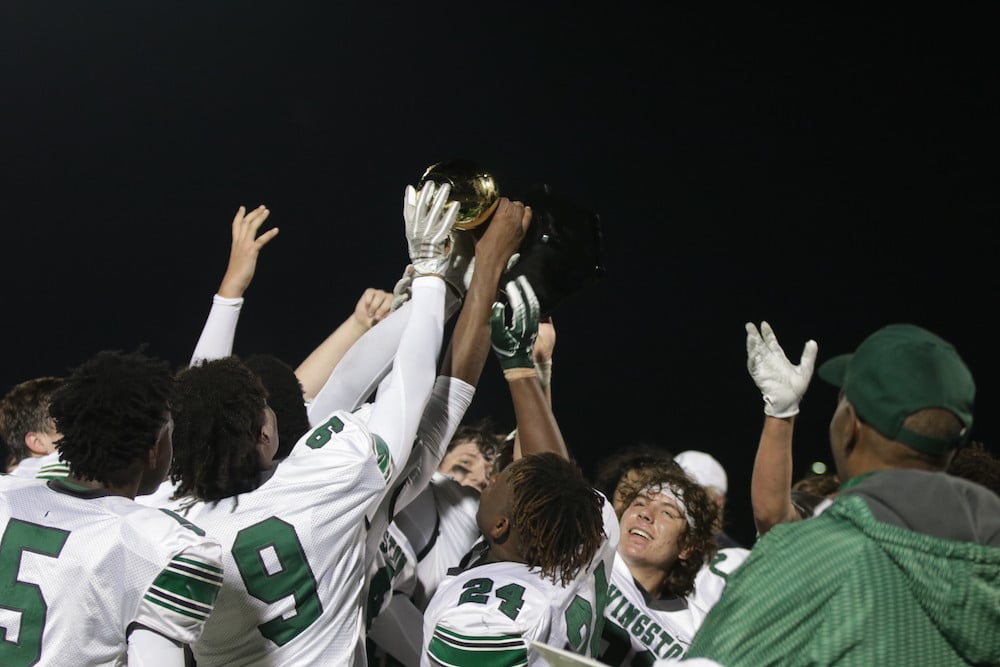 PHOTOS COURTESY OF LINDA JACOBS AND JO'HANNA PROCTOR Livingston Lions celebrate their victory on Friday November 6, 2020 as they win the district championship.

HUFFMAN - From worst to first, or maybe more accurate, from the outhouse to the penthouse. After winning only two games over the past three years, Livingston football has won the District 10-4A Div. I championship.

The Lions stunned the defending district champions on their home field, taking a 21-20 come-from-behind win Friday over Hargrave in Huffman. It is the first outright district championship for Livingston football since 1963.

The Lions fell behind 20-7 when Falcon quarterback Luke Thomas powered his way in from eight yards out with 2:45 left in the third quarter.

The Lions later answered with a Nigel Henderson interception that set the offense up at the Hargrave 15. Three plays later, freshman Ja’Marri Green took a sweep over the goal line from the three, cutting the lead to 20-14.

With just 2:51 in the game, Livingston again needed just three plays to score. After a 5-yard run from Damian Ruiz, the quarterback then took to the air, completing a 40-yard pass to Julian Gardner. On the next play from the Falcon 30, Ruiz rolled right and threw back to his left, finding Green wide open. The young running back cut across the field, dodging defenders to help give Livingston the lead.

On the next possession, sophomore Jontavian McNeal intercepted a pass to give Livingston the ball once more with under a minute to play. A first down from Green on third-and-five secured the win.

Behind 6-0 at the half, Livingston head coach Finis Vanover said his team looked down in the locker room.

“We sagged a little bit going into halftime and I told them, ‘It is like a morgue in here. We told you and told you that it wasn't going to be easy. These guys have been there for five or six consecutive years and they have beaten all comers, including us. They made fools out of us last year here and there were people dancing on our sidelines when we were 40 points down. There's only going to be one dance taking place here tonight, it is going to be when we win.’”

Ruiz threw completions of 28, 6, 40 and 30 yards The first of those was a scoring strike to Chris Washington to put the Lions up 7-6 on the first drive of the third period.

Washington is the only Lion to have played through the past four years. He began as a freshman and had only been a part of two wins before 2020.

“Those four years were crazy,” the senior receiver said. “My (freshman and sophomore) year, we didn't win any games and coach Vanover told us to believe and that is what we kept doing. He told us keep believing and we are going to win and we are going to turn around the program. That's what we did. It has been a long, hard four years for me and I am just glad we came out with a win. It took a lot of hard work. I did my part and I did all

The coach said a big difference in the offense for the final two quarters was getting the running game in gear. Green provided much of that, going for 53 of his 69 yards in the second half.

“We told our tailbacks, ‘If you didn't show up to play, get your tail on the bus and wait for us. We'll find somebody else that will run tough. Get busy running — and we did. (Coach) Seven (Armstrong) had some good talks with the offensive linemen about getting physical. They are the simplest defense (by scheme) that we played the entire year. Little Cypress (-Mauriceville, last week) was good, but these guys (Hargrave) are great.”

The district champions will now face Tyler Chapel Hill 6 p.m. Saturday in the bi-district round of the playoffs at New Caney’s Texan Drive Stadium.