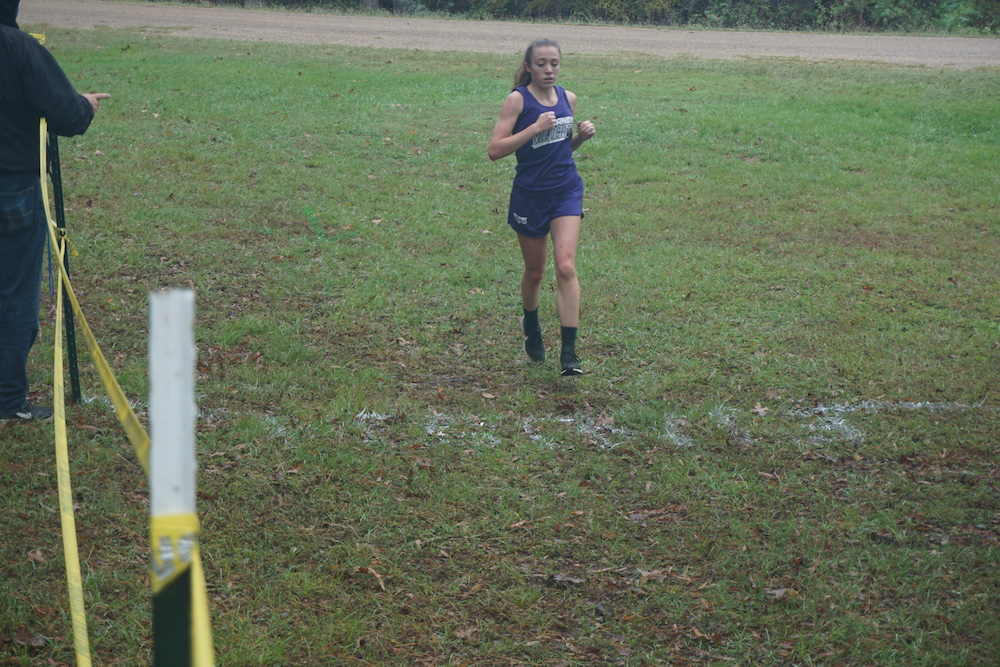 JASON CHLAPEK | PCE Big Sandy senior Bali Mitchell finishes fifth in the District 24-2A cross country meet last week. The Lady Cats finished second as a team and will compete in the Region III-2A Meet on Tuesday in Huntsville.

Beene finished the race with a time of 17 minutes, 23 seconds in frigid, rainy conditions and beat runner-up Jose Jimenez of Spurger by 26 seconds (17:49). This season also is the first time Beene participated in cross country.

“Never ran in weather like this,” Beene said. “A lot of people told me I’d be good at it and I tried it out. It’s pretty nice. I’m very competitive and I like anything that I can try to win.”

The top two teams and top 10 individuals qualified for the Region III-2A Meet on Tuesday, Nov. 10 at Kate Barr Ross Park in Huntsville. Despite Beene’s first-place finish and a fifth-place finish from Jordan Martinez, the Wildcats finished third and will miss out on competing as a team.

Broaddus won the boys crown with 47 points, while Spurger took second with 48. Big Sandy had 49 points — two shy of first and one shy of second.

Beene and Martinez will compete in the region meet as individuals. Despite winning the individual title, Beene believes his best is yet to come.

“I could’ve run better,” he said. “I’m coming off of a cramp injury, but I think I did well overall. I stretched, iced it and and rested as much as I could.”

Although this is Beene’s first season to run cross country, he has been a member of the Big Sandy basketball program. While basketball is his first love, he is open to participate in college cross country or track and field.

“Basketball is my first love, but I could see myself running in college,” Beene said.

While the Wildcats missed out on a region team berth, the Lady Cats did not. They finished second to Tyler County rival Colmesneil.

“I’m not sure if this is our first team title or not,” Bullock said. “We have very hard-working girls here at Colmesneil and I knew that they had good effort. Every coach would like for their athletes to give their best effort. I feel that’s what the boys and girls at Colmesneil do — give their best effort. A lot of these kids do volleyball or football as well. It’s a challenge dealing with injuries or running the day after a volleyball match or a football game, but through hard work they were still able to practice early in the morning. I think that’s all a coach can ask for is the best effort.”

In addition to being the head boys and girls cross country coach, Bullock also is the head boys basketball coach and a football assistant at Colmesneil.