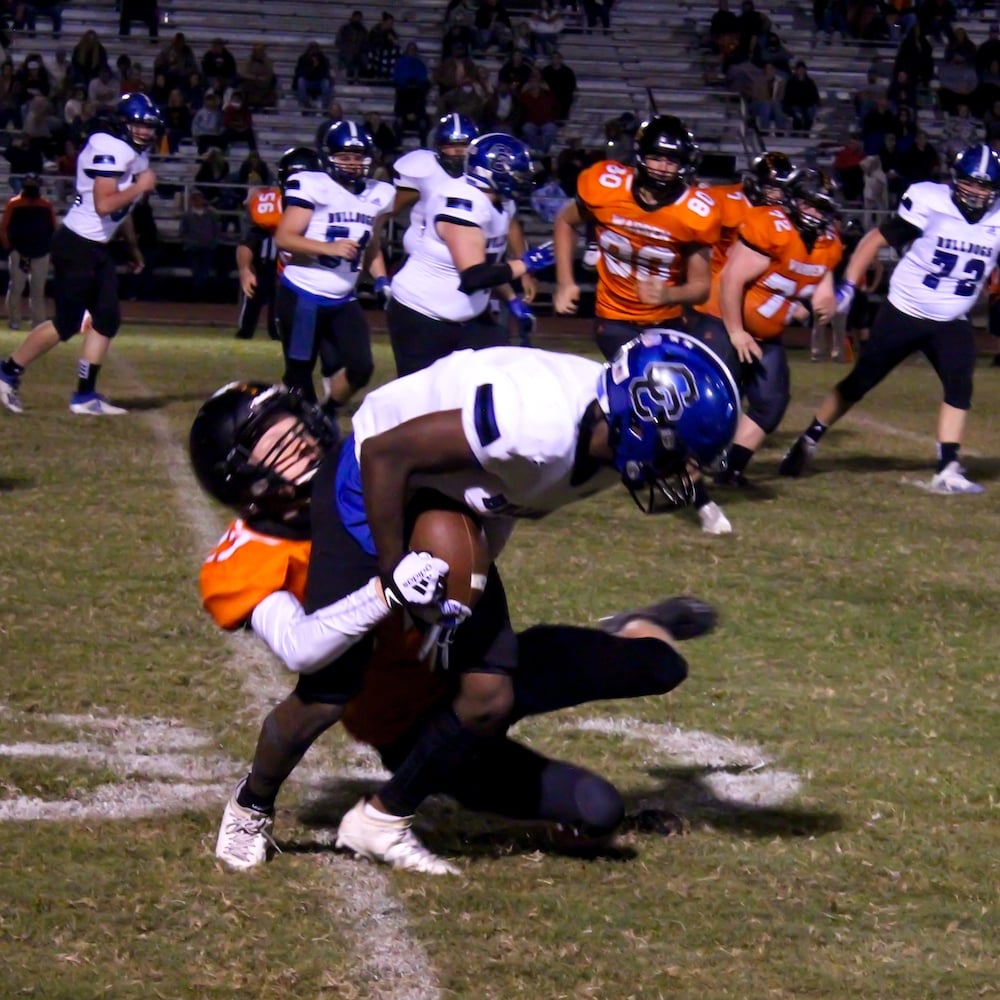 PHOTO BY ALBERT TREVINO A Corrigan-Camden wide receiver hauls in a pass as a Warren defender hangs on for dear life to try and bring him down Friday night.

The Corrigan-Camden Bulldogs defeated the Warren Warriors 28-14 on Friday.

It was the first district win for new head coach Brett Ratliff, who finally witnessed real-game progress under his offensive system.

"We have gotten better every week. I think we are finding weaknesses in different defenses. Sometimes, we have to run a little more or throw. Since we can play multiple, we are able to exploit those things." said Ratliff after the game.

The Bulldog defense had another strong performance, making crucial third- and fourth-down stops throughout the game.

"We definitely played a full team game tonight. When our offense stumbled, getting inside the red zone and not putting one in, our defense picked us up." Ratliff said.

It was also a breakout game for Bulldog sophomore quarterback Christian Hood, who ran for three of Corrigan's four touchdowns.

"[Hood] is a great athlete and has a heart on him." said Ratliff. "He never gets rattled and plays even keeled like a quarterback should. But he also plays physical like a running back."

The Warriors scored first with an early touchdown by senior running back Kevin Kirk.

Corrigan responded with Hood scoring his first rushing touchdown to tie the game 7-7 in the first quarter.

A turnover on downs by Warren in the second quarter gave the Bulldog offense a short field and a chance to take the lead. Hood finished that drive with 11-yard touchdown run to go up 14-7 at halftime.

The Bulldogs stretched their lead in the third quarter, as sophomore running back Anthony Harrell broke free for a 50-yard touchdown run. That score gave Corrigan a 21-7 lead going into the fourth.

Warren's offense would keep fighting, with help from a personal foul call that kept a late possession alive. The penalty was immediately followed by a 43-yard touchdown run by Warrior sophomore back Jeremy Smith to make it a one-score game.

Corrigan answered on its next possession, with Hood scoring his third rushing touchdown to help seal the win.

Corrigan's final game of the season will be this Friday at home against the Newton Eagles.