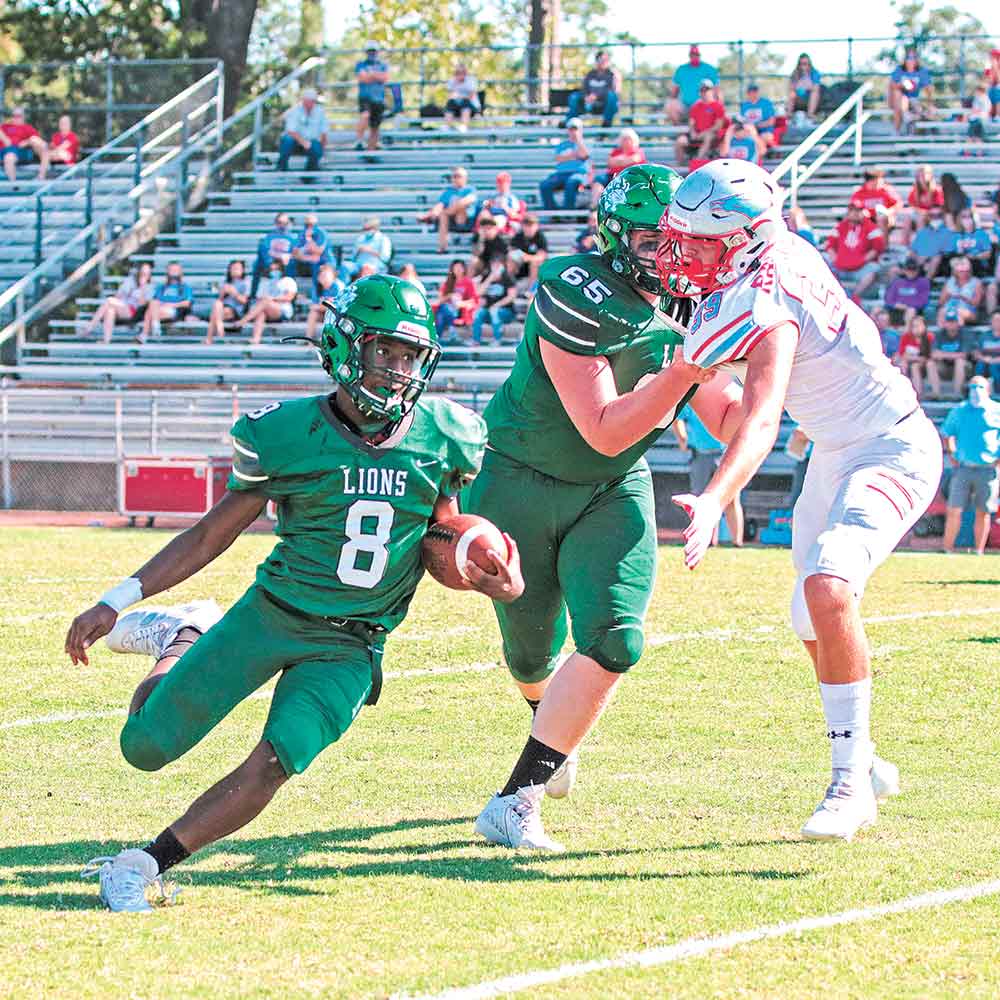 Izelhia Enard carries past the block of Lion offensive lineman Caleb Gann to pick up yardage. (Photo by Jo’Hannah Proctor)

The Livingston Lions came from behind Saturday for a 35-14 victory at home against the Lumberton Raiders in the first district match of the season.

In a game delayed because of weather, the Lions bounced back early to score four unanswered touchdowns and controlled most of the game. Livingston’s offense and defense stepped up when needed, according to Lion head coach Finis Vanover.

“Both sides bailed each other out. Offensive mistakes were covered up by great plays on defense. When defense had a lag or we slacked off, the offense came back and took it down to score. We balanced each other out today.” said Vanover. “Right now, we do not have a great knockout punch. We just keep leaving them hanging. That is all we talked about at halftime … We have to knock them out so we can finish it.”

Shortly after, Ruiz completed a 14-yard touchdown pass to freshman Ja’Marri Green. Along with the extra kick, the score gave the Lions an early seven-point lead.

Going into the second quarter, Lumberton responded with a touchdown drive to tie the game. A sneak on third down by Raider senior quarterback Drake Boykin set up an eight-yard touchdown run by sophomore Brady Fuselier.

The Raiders recovered the following onside kick and were able to capitalize on another scoring opportunity.

Boykin completed a deep pass to sophomore receiver Kaleb Koch, which helped set up a five-yard run to the end zone by Boykin. The short run gave Lumberton a 14-7 lead early in the second.

The Lion offense answered back from inside the red zone, with Ruiz scrambling his way for a touchdown to tie the game at 14-14.

Lumberton was quickly forced to punt on its next possession. The high and short punt gave the Lions good field position at the Raiders’ 43-yard line.

This time, Ruiz scrambled and stiff armed defenders to nearly reach the end zone. Two plays later, Lion junior running back Lynn Johnson punched it in from a yard out for a touchdown to take a 21-14 lead.

“We threw it and caught the ball really well off of some great scrambles by the quarterback. [Ruiz] made a bunch of plays with his feet. That is a blessing and gift that he has. We have an offense that takes advantage of that and is built around that.” Vanover said.

Livingston extended the lead on their next possession late in the half. The short drive finished with Ruiz dropping a long-distance pass to Lion senior receiver Chris Washington in the end zone to go up 28-14 at halftime.

Both offenses were scoreless and suffered turnovers during the third quarter, but the Lions would put together one more fruitful drive in the fourth, despite starting from its own goal line. First-down runs by Ruiz and Johnson were followed by a 58-yard touchdown pass to Lion junior receiver Willie Fagan.

The Lion defense shut out the Raiders for the entire second half, making crucial third and fourth-down stops.

“The defensive linemen made some great plays upfront when they had to. We found a soft spot when [Lumberton] was running the quarterback lead. We were starting to run out of gas and they got their motors running. But overall, we clamped down pretty well.” said Vanover.

The Lions are scheduled to travel this week to play the Splendora Wildcats, with kickoff set for 7 p.m. Friday.