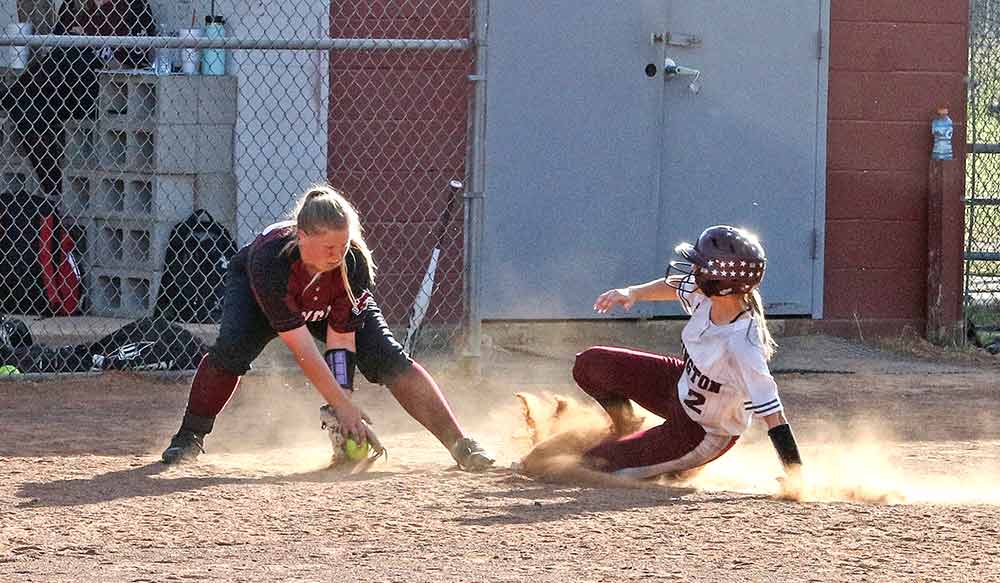 Kalli Saucier tries to get the tag on a Tarkington runner taking third. PHOTO BY BRIAN BESCH

Onalaska softball won a back and-forth thriller Thursday 10-9 over Tarkington in extra innings to clinch a playoff berth for the second consecutive year.

The three-hour marathon went nine innings before deciding a victor. Both teams had multiple opportunities to take the contest, but a wild couple of extra innings played under two sets of rules provided a conclusion.

Tied at 2-2 in the fifth inning, Tarkington seemed to take a commanding lead with three runs. The final two came on an outfield error, but the relay was in time at home to get a potential third, keeping the game at 5-2. The outfield mishap was a problem early on, as the Lady Horns scored their first two runs the same way.

Onalaska answered in the bottom half of that inning, beginning with a Madison Wilson bunt and stolen base. Kaitlyn Wilson was walked intentionally and Kenadi Houser reached on error, causing a run to score. Mary Joy Carriaga was hit by a pitch, loading the bases with two outs. Kalli Saucier walked to drive in a run and Savanna Benningfield brought in two with a double to take a 6-5 advantage.

Tarkington scored two more in the top half of the sixth to take another slim lead.

Kaitlyn Wilson got the bottom half of the sixth started with an intentional free pass. Houser beat out an infield single and Carriaga drove in a run on a Texas Leaguer that found a patch of green grass, knotting the score at sevens.

A theme had developed in the game, as neither offense would be retired quietly. In the seventh, the Lady Horns again took a lead on a double down the line in left field, scoring a runner from first to go up 8-7.

To add a little drama, the Lady Cats waited until there were two outs in the bottom of the seventh inning to get the offense moving. Madison Wilson was a catalyst all night for Onalaska. She singled and stole a base. When the throw to second trickled into center field, Wilson sprinted around the bags. A few more would reach and a Houser drive was snagged off balance in right field, sending the match into extra frames.

The eighth inning was played by starting a runner at second base, similar to new Major League Baseball rules. A double would be more than enough to score the ninth run for Tarkington.

“I didn’t know what happened and I was trying to find out,” Onalaska coach Ashley Sustaita said of the unexplained rule change. “They couldn’t give me an answer and apparently it is something they had done at Coldspring. My (athletic director) looked all through the handbook and it is not in there, so, no idea.”

Sacrifices from Carriaga and Saucier got Houser past a throw home to tie the game and force a ninth inning.

Playing once more under traditional rules and starting with the bases clear, Tarkington loaded them, but was held without a run.

Onalaska’s Mattie Sootoo, a pinch hitter from a few innings prior, started the bottom of the ninth by reaching on error and stealing second base soon after. That set up Madison Wilson, who made hard contact. The ball was misplayed and Sootoo slid into home to begin a celebration.

“This is what you try for; it’s not even about the win,” Sustaita said. “There were so many things that go on in the dugout that spectators don’t even see that lead to these kind of moments. We could have lost and still felt good. That is – as coaches – all you want. You want your kids to be in an unselfish environment and fearless. When you have that, magic happens. We had kids that stepped up to the plate like Sootoo, who is a senior move-in that never batted. She steps up and does what she needs to do. We had our key kids getting walked intentionally, so big moments show up for other kids.”

The Wilsons were also responsible for the first two Lady Cat runs, with Madison scoring on Kaitlyn’s sacrifice fly in the first. Kaitlyn smacked a solo home run in the second. She  would be intentionally walked for the remainder of the game.

Onalaska moves ahead of Tarkington for fourth place in the district. If they can upset New Waverly, they will have a chance at third. For now, however, they have earned a spot in the postseason.

“We beat some really good teams early on in the season, but playing like this the way that we are, we can beat anybody in the first round. We just have to have the right pieces clicking at the right time.”