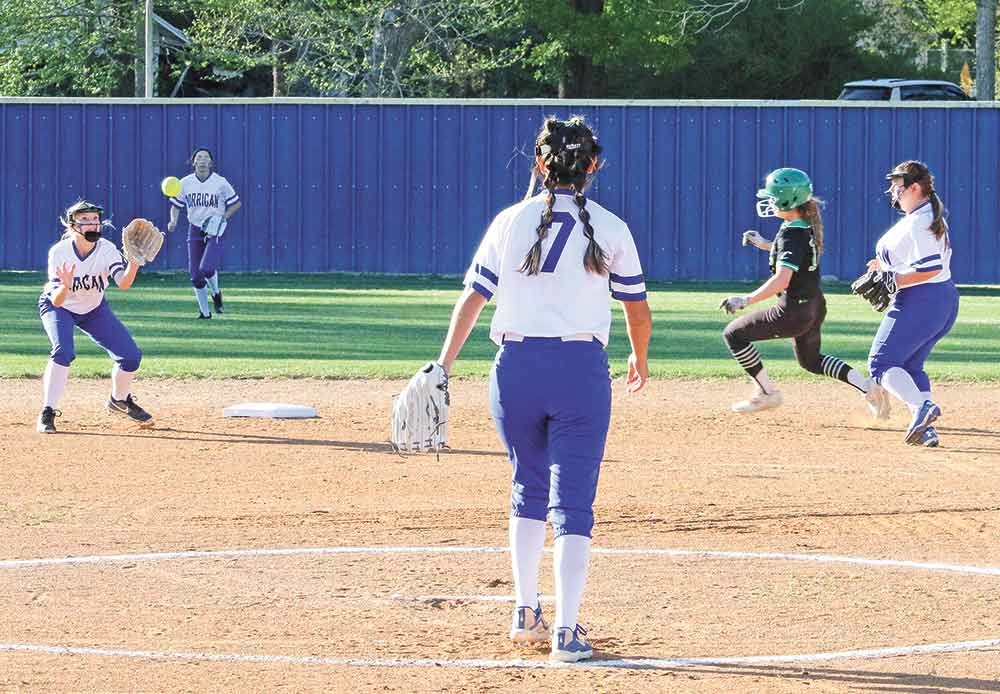 Shortstop Kellyn Smoke awaits the throw from home to attempt the tag on a runner stealing second base.

Friday’s softball contest in Corrigan was never close, as the Central Lady Bulldogs scored early and often for a 17-0 victory.

Central put up 10 runs in the first inning, four in the second and three more in the third to end the contest early. Central is currently the second-place team in the district.

“I have two returning players from last year and the rest of my team has never played softball,” Corrigan-Camden coach Rusti Hall said.

“The last few games we have actually played longer than three innings, and we have looked a lot better and have been improving. We have grown a lot since the beginning of the year. I have six freshmen and we have lots of potential to grow. We just have to put in a lot of work to get there.”

The top of the Corrigan-Camden order made solid contact, led by Kellyn Smoke. The shortstop doubled in the first inning, the sole runner the home team put in scoring position.

“The top of my lineup has been producing pretty much all year,” Hall said. “We just have to get the bottom of the line up there. Our little one that got a double tonight, she is one that has never played before. She came to practice every day last year. She is just an athlete.”

Fighting an uphill battle this season, Hall is preparing her team for the future. Next season, the school drops a classification to 2A.

“It definitely benefits softball and us probably more than the other sports. We will have competition against Lovelady and Douglas, who have always been tough, so we will see. We are playing against schools right now that quadruple our enrollment rate. It is really hard when you only have 40 kids to choose from versus 200. But I have a really good group of girls that are positive and they encourage each other. I tell them before every game that they control their attitude and effort. If you have those two things that are positive, it doesn’t matter what the scoreboard says.”