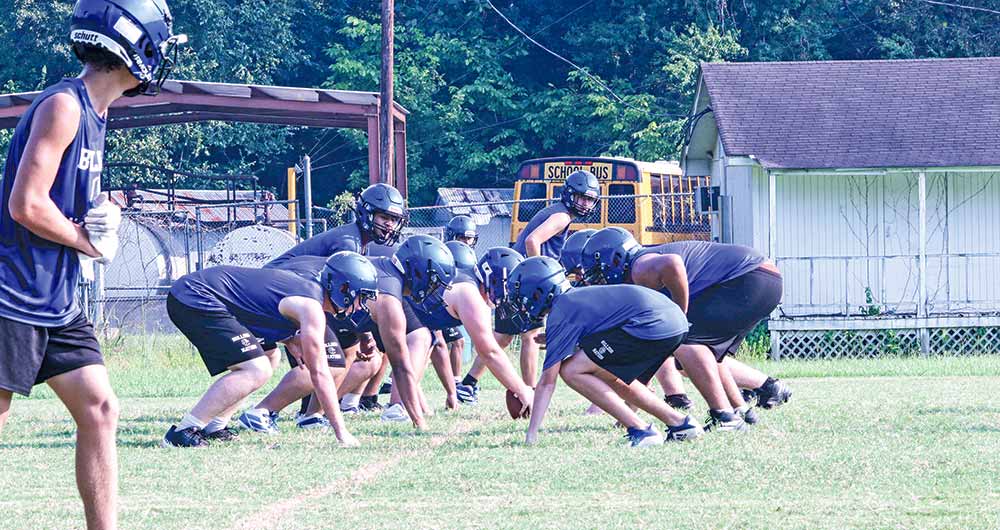 The Bulldogs began practice this week and new head coach Brett Ratliff said he is impressed with his squad’s effort. (Photo by Brian Besch)

Polk County-Once in earshot of the Corrigan-Camden practice fields, you can hear both music and the sounds of football. Athletes are upbeat during the heated workouts, paced by the sound system on the sidelines and coaching whistles on the field.

Football season has begun on the north end of Polk County.

"I'm really excited about the kids and the way they have been able to match my intensity and what I am wanting," new Bulldog head coach Brett Ratliff said. "Structurally, I think it is probably pretty different from what they are used to from a practice standpoint. In the first day, you can kind of tell that. After that day, they really  haven't missed a beat."

Ratliff describes his practices as "very rhythmic," explaining that he likes to have players run everywhere they go. The fast pace is expected to serve his team well on Friday nights in the future.

Corrigan fans are likely to see many more receivers on offense than they have in previous years. The 'Dogs could be seen running many three and four wide receiver sets during 11-on-11 drills Thursday afternoon.

"We are heavy 21 (personnel), where we are going to run a tight end and two backs. That is my bread-and-butter, whether it be in the gun, or a flexed out tight end, or pro I. We're going to do both and be good at both, and we are going to make our money on that. I'm not scared to go to by 2x2 (two receivers to either side) or 3x1 (three receivers to one side, one on the other) and spread the field out."

Wide receivers stayed busy catching screens, along with intermediate and deep routes. The backs took part in the passing game and ran the option.

The new-look defense flew to the football, having multiple tacklers ready to make plays.

Changes on that defense will be from a 3-4 look or 50 front, to more of a 4-3 alignment that Ratliff believes will suit his athletes.

There is plenty of learning on both sides of the ball, as athletes are picking up the nuances of their new system through chalk talk videos and discussion before practice even begins.

The coach said having a young team with few seniors concerns him a bit, but is excited about the talent that is there. There will be approximately eight seniors on the team and the coach is hoping to carry 26-28 players on the varsity.

The team will feature plenty of sophomores, but several have had varsity experience. On the 3A level, Ratliff says depth will always be an issue.

"I'll be honest with you, on day one we came in and I wasn't defeated or worried, but I was just a little stressed because it was so different for the guys from a practice standpoint. It was just the sheer amount of moving that we do at practice. I was wondering if we were trying to go too fast or trying to do too much.

"I told myself that I was going to stay the course and just see the next couple of days how they progressed. I am very pleased with our progression right now. I won't say that we are ahead of schedule, but we are definitely not behind. I think we are right where we need to be right now and we are ready to get into the pads and really see some things."