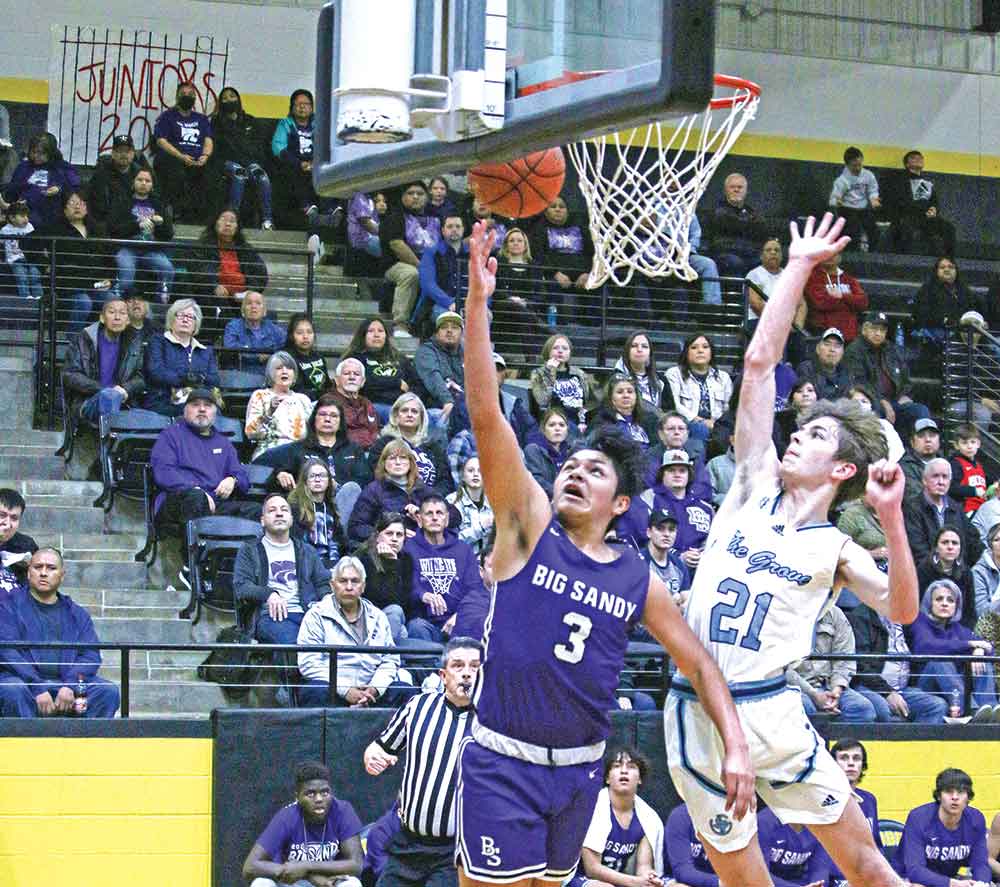 Kaden Foster puts up a shot after a collision on the baseline. Photos by Brian Besch

Big Sandy basketball used a seven-point difference in two quarters to survive Union Grove 54-45 in the area round Friday night in Woden.

“It was a very close game, and we made just a few more plays down the stretch and made some free throws,” Big Sandy coach Kevin Foster said. “That is the way close games go.”

A slow start to the game saw the Wildcats fall behind 11-6, as Union Grove hit a few buckets late in the period.

“We knew they were going to be athletic,” Foster said. “We knew they could shoot the ball. It did take us a little time to adjust to the physicality of the game. I thought we had tons of good looks early, we just couldn’t make a shot. We settled in the second quarter and outscored them by seven. I told the kids (at halftime) let’s just try to continue that.”

Both teams would put up 17 points in the third quarter. The game was played at a faster pace over the final two periods. Big Sandy had an advantage in ball handling and running a half-court offense, but struggled to keep the Lions off the boards.

“We were able to get a little separation in the second half, but just not rebounding the ball and them making big shots, we had to adjust some things defensively. We always give a lot of help on the drive because we want to protect the paint. We had to change what we do in the second half and lock in to their shooters more and just trust that we were going to do a good enough job of keeping the ball handlers in front of us.”

Aubrey Woodard, who led the Lions with 17 points for the game, had seven in the final eight minutes of action. He would receive just one bucket of help in the fourth. Meanwhile, Bullock and Beene-Williams continued to lift the ‘Cats, with eight and five points, respectively.

Foster said Union Grove’s athleticism and how they would match up was a few of the concerns going into the contest.

“They’ve got guys that can shoot the ball, and I think the biggest thing was if we were going to keep their dribble penetration out of the lane and were we going to keep ourselves from having to help and then them kick to shooters. They space the floor so well and were knocking shots down, and they pass the ball extremely well.”

Beene-Williams led the Wildcats with 20 points for the game, one more point than Bullock. Adrian Thompson added eight, with a couple of 3-pointers.

Timpson, the state’s No. 4 team in Class 2A, will be the next opponent in the regional quarterfinals. The Polk County Enterprise Facebook page will have the time and site once it is announced. It is also where highlights of this game can also be found.