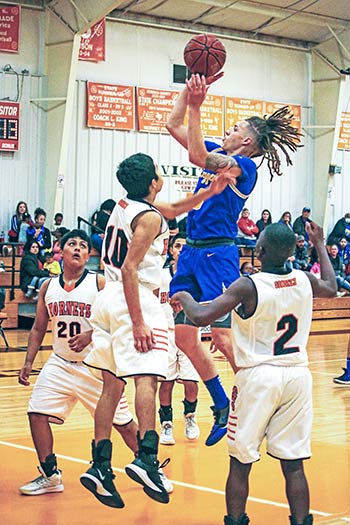 The game was never really in doubt and the biggest cheer from the visiting Pirate section Friday was when their team hit the 100-point mark. Led by 49 points from Jacolby Sells, Leggett walloped the Hornets 106-27, improving to 2-1 in District 28-1A.

After a 19-5 first quarter, the Pirates rolled off totals of 31, 26 and 30 in the three remaining stanzas to reach triple digits.

some being sick. We got out and played good defense, but started slacking up a bit in the late third. if we keep working as a team, we will get better day by day.”

The first-year Leggett coach said the win could boost his squad as high as second in the district, depending on other league games Friday.

Prior to Friday, the Pirates lost in Zavala and defeated Burkeville by two Tuesday night.

Goodrich found ball handling difficult versus a tenacious press and rushed the offense when they could advance beyond half court. Most of the Leggett points were off turnovers.

“We are terrible and don’t seem to mind losing,” Goodrich coach Lester King said. “We are not doing anything about it. You would think that kids would stay after practice and shoot a little bit or work on dribbling, but there is  othing extra. They are satisfied with losing. I hate to lose; I don’t care what it is. Even if it is a game of marbles, I hate to lose. They don’t have that in them. I haven’t had a boy this year stay in and do anything (after practice) – I have had a couple of girls, but no boys.”

The team did play inspired ball over the final eight minutes, turning in 14 points for the quarter.

Sells was able to spread his points over four quarters. His 10 points in the second period was the lowest and 14 in the fourth was the peak.

Adding to the total for Leggett was Jesse Calderas with 21, Joshua Perkins with 18 and Andres Diosdado with 10. For the Hornets, A’mareion Bookman had a 20-point night. He scored 11 of those in the fourth.

A trip to Chireno is up next for the Hornets Tuesday, while the Pirates return home for a match with Chester.