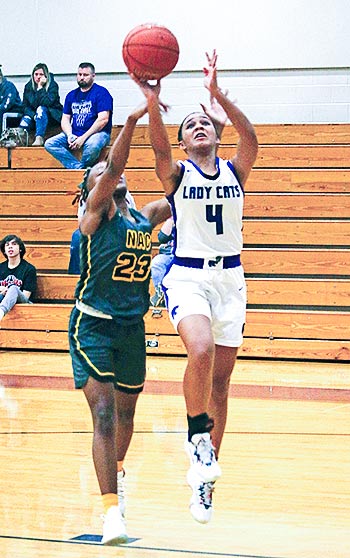 Briana Miles goes in for the layup. Photo by Brian BeschBy Brian Besch
This email address is being protected from spambots. You need JavaScript enabled to view it.

The Lady Cats have spent the non-district portion of the schedule facing large, athletic teams that are often in larger classifications. Monday was no different, but Nacogdoches had trouble against the team ball Big Sandy played.

“I was proud of our defense today; we stepped up big,” Big Sandy coach Ryan Alec said. We gave up six in the first half and gave up six in the second half. If you take a look at the team we are playing — very athletic, very long — and if we can give up 12 points in a game to them, that’s good for us.”

The Lady Dragons had just six points going into the fourth quarter and life on the offensive end was made difficult by the stingy Lady Cats.

Nacogdoches also played well on defense by obtaining several steals, keeping the score closer than it could have been.

“Offensively, we hit some spots at times, but we could never just get on a run,” Alec said. “I think it is one of those gradual things where we took the lead, but we didn’t shoot the ball great. We had some others step in and knock down some big shots for us when they needed to. We were just finding someone to help us get going. It took a little bit for us to get rolling.”

The coach said that if different parts will get hot shooting the ball, the team can maintain control in games when they play excellent defense.

“We do a good job of feeding off each other and I thought the second quarter did that for us with some shooting and scoring. Also in the second quarter, we had some hustle points with people getting some steals and that kind of helped separate the scoring a little bit.”

Alec still wants to work on team communication on the floor before league play arrives.

“The way we play defense is a little bit different than the way we have in the past. It involves a lot more communicating between our players. It is something we still have to improve on as we work through the season.”

The next home game for the Lady Cats will be Jan. 4 versus Evadale.