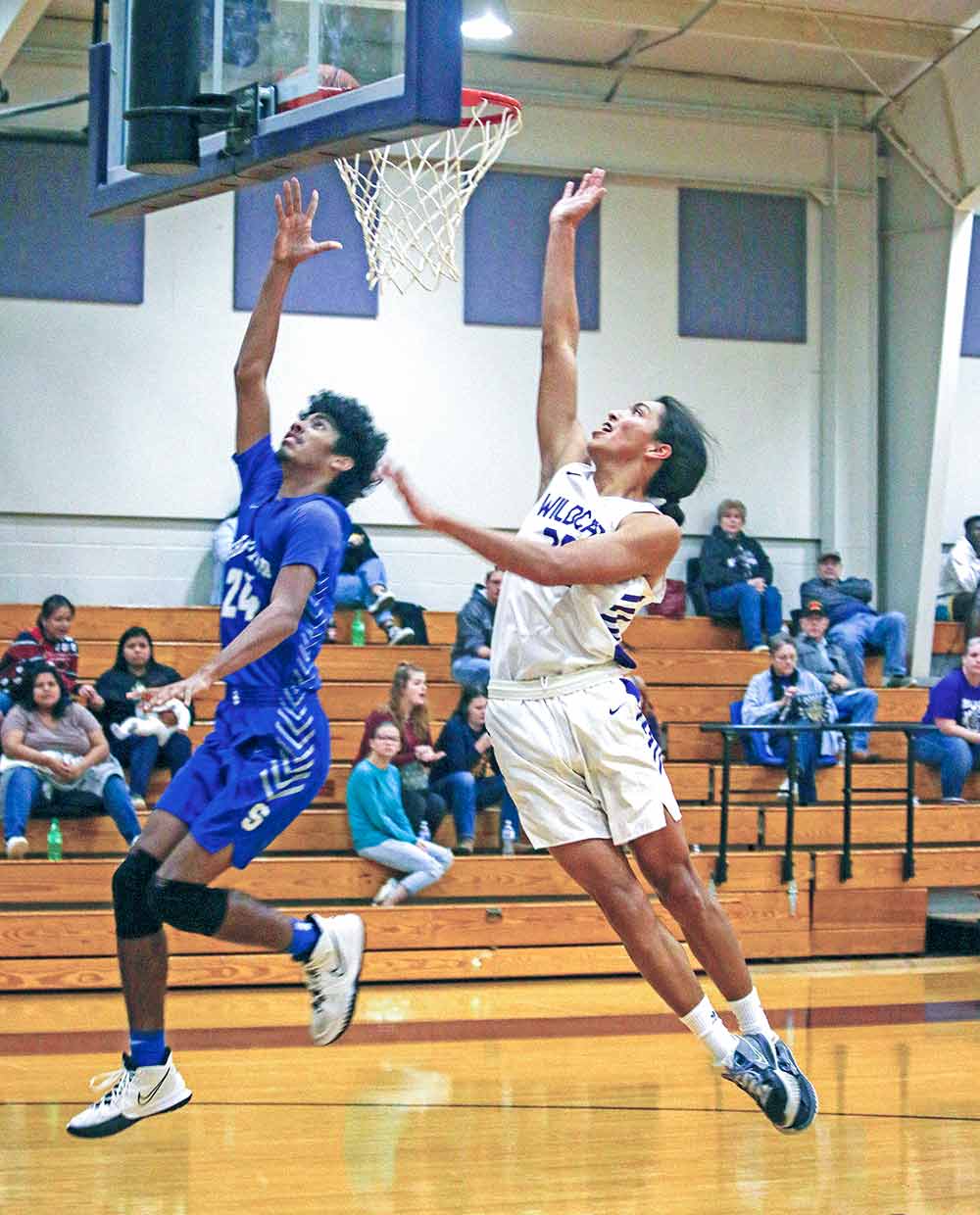 Seth Beene-Williams flies in to block a shot.

Both Big Sandy and Shepherd had problems getting their offense started Monday in Dallardsville, but the Wildcats were able to pull away late in the game for a 58-35 victory.

Not only were shots not falling, but the Pirates and ‘Cats played excellent defense early on, playing to a 5-3 first-quarter score, as well as an 18-13 Big Sandy advantage at the half.

“I thought we came out and played well at the beginning. As the game progressed, it was just the little things,” Shepherd coach Jeremy Bennett said. “We haven’t had all of our players together all year long and we’re young, so those little things start catching up with us later on. There were too many mental mistakes there at the end.

The Shepherd coach said he hopes to improve on the offensive side once players are comfortable with each other and his system.

Big Sandy coach Kevin Foster said his team has been streaky so far in the 2021-22 season.

“In all honesty, that has kind of been our deal all year,” Foster said. “We’ve had quarters this year where we will score two and then turn around in the next quarter and scored 22. You feel like really getting mad at the kids in the first half, but the thing is, we are getting good shots, we were just missing everything. It didn’t matter what we got really, we just weren’t putting the ball in the basket. It wasn’t our best game by any stretch of the imagination.”

Where the offense lacked early on Monday, the defense more than made up, keeping Shepherd scoring at a minimum. Foster said his team looked different Friday, playing their best game of the season in a win over talented Grapeland by 25.

“Our identity is we are generally really good defensively and rebound the ball, but some nights our offense is there and some nights it is not,” Foster said. “That is when defense and rebounding have to keep you in games. I think we have a good team, but we are not an explosive team. I tried to tell people that a 20-point win for us is like somebody else beating you by 35 or 40, just because of the style of play.”

The Wildcats picked up the pace in each period, with 5, 13, 15 and 25 scored by quarter. The Pirates also scored in double digits in each after the first quarter.

“The defense looked really good when we were tuned in and doing what exactly what we were supposed to do,” Bennett said. “We started getting — for whatever reason — a little out of place. That is when they start making a run and increased the lead on us. Passing has been off all season long. We just throw the ball away and make too many dumb mistakes.”

The next home game for Shepherd will be in the new year, on Jan. 7 versus a tough Hardin-Jefferson squad. Big Sandy will play at home Jan. 4, a district game with Evadale.