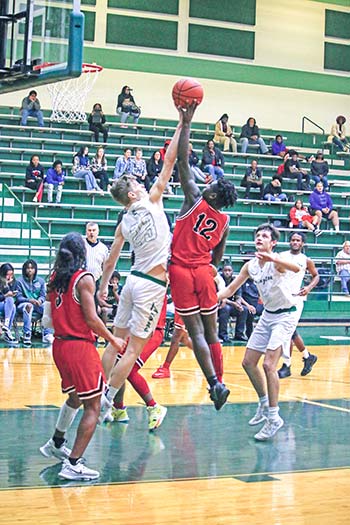 William Dault blocks a shot in the lane. He also led the Lions with 30 points. Photos by Brian BeschBy Brian Besch
This email address is being protected from spambots. You need JavaScript enabled to view it.

Livingston basketball built a large lead of more than 20 points in a non-district tip at Lion Gym and cruised to a 73-61 win over the previously unbeaten Coldspring Trojans.

Livingston coach Calvin Phillips said Tuesday was the best game his squad has played this year. The Lions broke the menacing Coldspring press enough to get several advantageous breaks to the bucket and shot the ball well all night. The home crowd enjoyed a 22-point advantage midway through the second  quarter that grew slightly into the third.

Leading the attack was William Dault, who scored 30 points, with 22 of them before halftime. Dault moved to Polk County and has added help, but had something extra versus the Trojans.

“The kid from Austin, Dault, he hasn't been on fire like that. I didn’t realize he had that many points,” Phillips said. “Hopefully, he is out of his slump, because the first four or five games we played, he wasn’t even shooting like that. He was getting frustrated because he knew he was a better shooter.”

Coldspring coach Greg Devers was also impressed with the performance.

“(Dault) just shot the lights out tonight. (Dault and Jordan Bush) — they hit some big threes. I think in those first seven games, we only allowed seven threes. We are going to be successful with up-tempo and the press. We did in the second half, but I needed about eight more minutes.”

The Lions would have eight 3-pointers for the game. Dault provided six of those, while Bush had two. Jontavian McNeal totaled 13 points, Bush had 10 and Julian Gardner added nine with his tight defense.

The Trojans did not throw in the towel in the final period, and instead amassed 27 points. Most of the damage was caused by Luke Monroe, who poured in 18 points in the quarter. He led all scores in the contest with 31. Helping him was Chris Harden with 14 and K.D. Bookman with nine.

“We talked about being patient and limiting our dribbles,” Phillips pointed out as keys to the win. “With everything that we do, we have to pass, pass, pass and cut, cut, cut. We were open all night in the middle. When they got a turnover, it was because of a long pass or a lazy pass with nothing on it and they came up and got it. We had to not let them beat us with our dribble. The kids played really good as far as not giving up the ball and just passing it around.”

The competition does not get easier for Livingston, playing host Friday to the Class 6A Aldine Mustangs. Next week, district begins with Liberty.

Up next for Coldspring is another tournament, this time in Huntington.

They will eventually return home for a game Dec. 17 versus Jasper, and Orangefield three days later.

“I have a couple of guys out right now and have been playing with eight all year,” Devers said. “We just played four games over three days, but Livingston did a great job today. Calvin had his team ready for our press. I think it came down to them making threes and free throws, and we didn't. We didn't start hitting threes until the fourth quarter. Sometimes it is good to have a loss like this and maybe we can rebound from it. With this team being so young and inexperienced, it is a good time for them to learn. They have to understand that they have to get up for everybody; they can’t just pick their opponents.”

Devers said his team played well in the recent Big Sandy tournament, taking the championship over Splendora Saturday. He is hopeful to get a couple of starters back soon to offer some depth for the long season.