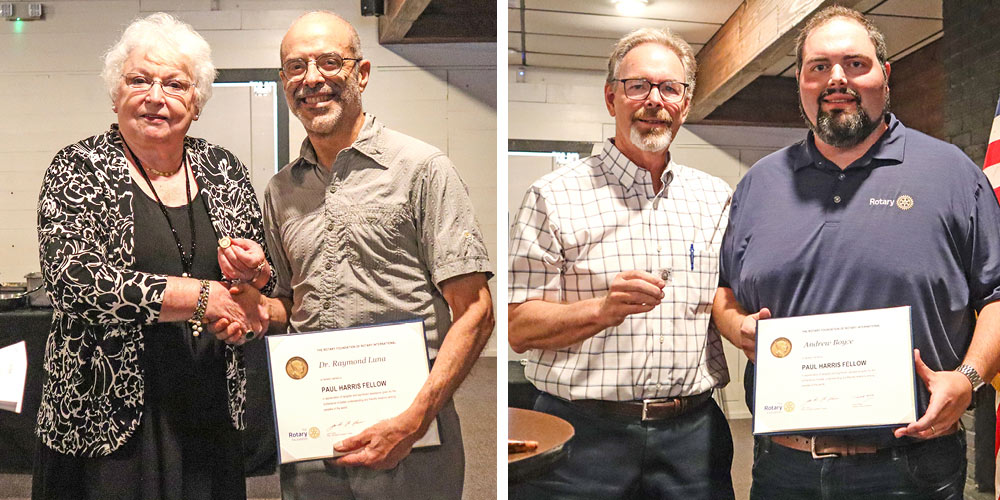 By Rotary Club of Livingston

Dr. Ray Luna and Andrew Boyce were recognized as Paul Harris Fellows by the Rotary Club of Livingston Thursday.

The Paul Harris Fellow is a prestigious distinction given by Rotary and is named for one of the founders of Rotary who was very involved in the development of the organization, which grew from a single club in Chicago in 1903 into today’s global organization. The award was established in his memory to recognize outstanding contributions to the ideals of Rotary, specifically, ‘Service Above Self,’ the motto of Rotary.

Rotarian Judy Cochran presented the award to Luna after a brief speech about him which follows:

“Dr. Raymond Luna was born in Albuquerque, N.M. on July 16, 1954. His mom dedicated her life to raising him and his four sisters, and his dad was a navigator in the air force during World War II and worked as an engineer at the Sandia National Laboratories. His parents emphasized the importance of having a good work ethic.

“Dr. Luna moved to San Antonio for his family medicine residency where he met Livingston native Dr. Jerry Wood. In 1985, Dr. Wood convinced Ray and Grace to move to Livingston where they established their careers and raised their family. Since then, Dr. Luna has been providing excellent medical care for countless patients in Livingston.

“During the pandemic, Dr. Luna worked tirelessly to provide safe and effective health care to the community. During the tornado that ravaged Onalaska he helped to organize and aid the disaster relief shelter including providing health care to anyone in need. These are just a few examples of the dedication and services Dr. Luna has offered to the community. There are too many to list out fully and many more that he provided anonymously.

“He has participated in the MS 150 bike ride for several years. He worked with the health district in giving COVID shots at the commerce center for several days. ‘Service Above Self’ is the Rotary motto and this is the highest award that Rotary gives to non-Rotarians. Dr. Luna has lived a life of service above self.

“Some people call him Dr. Luna, some just call him Doc, others call him Councilman, some call him Dad. I call him my friend, but those special to him call him Poppi. I am pleased to present the newest Paul Harris Fellow award to Dr. Raymond Luna.”

Accepting the award, Luna said, “Grace and I came here in 1985. Jeffrey was one and Ann wasn’t even born. We were best friends with Jerry and Patsy (Wood). I knew how Jerry felt about Livingston. This was more than a job. It was like joining a family. This is a generous and compassionate community and I thank you very much.”

Rotarian Ron Boyce presented the award to his son, Andrew, after a brief speech about him which follows:

“In the summer of the year 2000, we moved back to Livingston. Andrew was between the fourth and fifth grade. We had been in Port Neches for the past 10 years. Andrew did not want to move. He loved his friends, his teachers and his school. You could say that he came kicking and screaming to Livingston. When we got here, we started looking for activities to get Andrew involved in his new surroundings. Someone referred us to Frank Henderson who was coaching the Livingston Leopards youth football team. When Andrew joined the team and got to know the other players, his whole attitude toward Livingston changed. He loved playing football and he loved his teammates. In high school he was an all-district offensive tackle and set a state record in powerlifting. He went on to play college ball.He keeps in touch with all of his old teammates, both high school and college.

“While in college he called his mother and said, ‘Mom, I met a girl.’ Not long after that, Dakota became part of our family. They have two sons, ages 6 and 2. They are the joy of their grandparents.

“After college he came back to Livingston to coach football for three years. While on the golf course, some friends of mine suggested to Andrew that he should go to work for his dad at the title company. Kathy and I thought that was a good idea and we hired him. It turned out to be a great decision for all of us. He is now our CEO and in charge of running the company. His wife Dakota also works for the title company and is one of our lead closers. These two make a great team and they are certain to have a bright future.

“One day he asked me if he could go to Rotary Club with me and I said absolutely. He joined Rotary and got involved. He served as our president the last half of the year and will serve as our president for the coming year.

Andrew was no stranger to Rotary. He sang with the Honors Choir at Christmas and received a Rotary scholarship. He also serves on the board for Boys and Girls Club and the Chamber of Commerce. He will be the President of the Chamber next year. He also won 2nd place in chicken in the recent barbecue cook-off and 14th in brisket out of 40 teams.
“It’s my proud honor to present this Paul Harris Fellowship to my son and our president, Andrew Boyce.”
“This is an honor, especially coming after Dr. Luna,” Boyce said upon receiving the award. “When presented with opportunities, I say yes and figure it out later. That’s always been my way – in business and in life. It’s been a pleasure.”