Local appears on The Price is Right

“Oh. My. Gosh. It was so fun. I had been waiting to spin that wheel since I was five,” Livingston Resident Melissa Russo said of her recent appearance on the long-running CBS game show, The Price is Right.

“I used to watch with my grandmother when I was sick or had early dismissal or during summer vacation. We watched it every day and every day my grandmother would say, ‘Some day you and I are going to fly out to California and stay with Cousin Timmy and go to a Price is Right taping,’” she said.

Melissa Russo, of Livingston, and Drew Carey, host of the CBS game show, The Price is Right, are shown together on the day that Russo fulfilled a childhood dream by appearing on the show. Courtesy photo

Russo’s grandmother has been gone for over 20 years, but Russo was in California last year visiting Cousin Timmy and told him about it. “He’d never heard the story before but when he did, he said, ‘We must do it,’” Russo said.

A lot of things had changed due to the pandemic and the whole process was different, Russo said, adding that they have a much smaller studio audience now, following the pandemic.

“He (Timmy) sent me an application before the holidays, and I filled it out and sent it in. They contacted me and conducted several interviews and then we selected a date. We made T-shirts with my grandmother’s picture on them, so she’d be there with us. It was amazing. I think she was loving it,” Russo said.

Russo won a pool table and a rowing machine although she ended up forfeiting them, as she’s currently traveling full-time in a camper. When asked if she received money in place of them, she said, “No, unfortunately.

“I did when a pretty fancy mini-fridge with French doors that I sent to my mother and stepfather,” she said.

Originally hailing from the East Coast where she grew up in Pennsylvania, Russo maintains her Livingston, Texas address as her legal address while she’s on the road traveling. 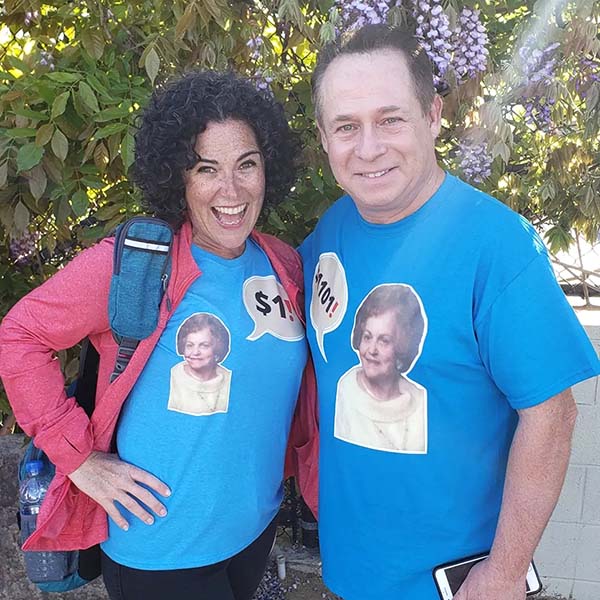 Melissa Russo, of Livingston, and her cousin Timmy sport the T-shirts they made to wear to a taping of The Price is Right. The T-shirts feature a picture of their grandmother who watched the show daily and promised Russo that one day they’d go. Courtesy photo