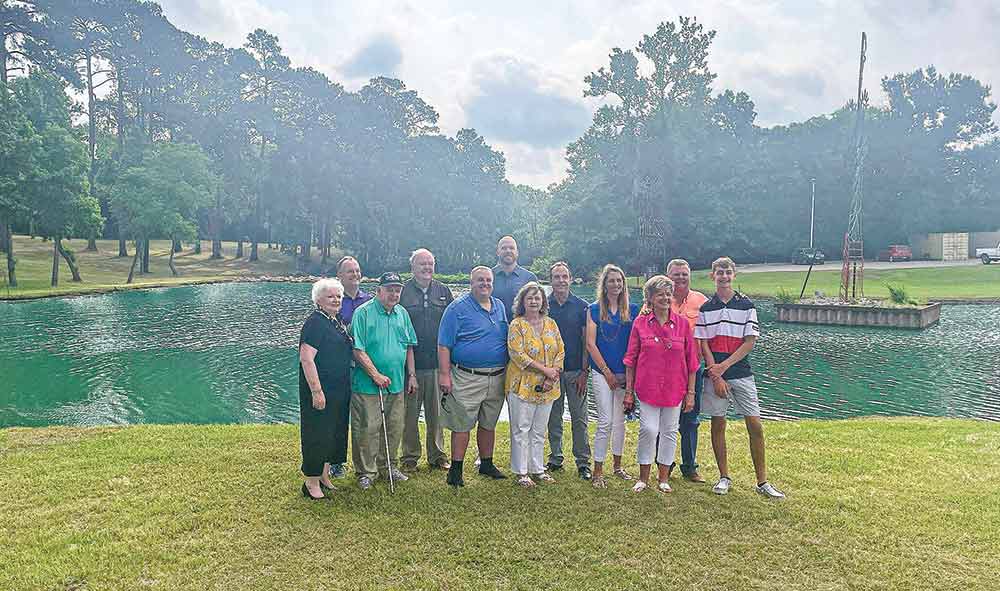 Three generations of the Pritchard family were present for the dedication ceremony of Cannon Pond & Park Friday. The 5.9-acre tract located beside and behind Whataburger in the 1500 block of West Church Street was given to the city by Col. Cannon H. Pritchard and the Pritchard family in memory of his grandparents, Stephen Jason “S.J.” Cannon and Pattie Willis Cannon. The Livingston City Council approved “Cannon Pond & Park” as the name during its May 10 regular meeting.

Mayor Judy B. Cochran read the following history of the Cannon Family:

“S.J. Cannon was one of Polk County’s most prominent citizens. He came to Livingston on the train the day after the town burned down in August 1902. He had met Pattie Willis on her visit to his hometown of Thornton, Texas. He dated her for three weeks and then came to Livingston to ask her parents if he could marry her. They were married by the Livingston Methodist minister in December 1902. The Cannons returned to Thornton to live until November 1917 when they moved to Livingston.

“S.J. Cannon was a graduate of Hill Business College and worked in the grocery business and the wagon and saddle business with his father. He was also a licensed funeral director and embalmer. Upon arrival in Livingston, he worked for the J.W. Cochran Funeral Home for 10 years, as well as establishing the Cannon grocery store called ‘Cannon Cash Store’ on the west side of the courthouse at 313 Jackson Ave. which he operated from 1917-1945. He kept two wagons and four horses at the rear of his store and delivered groceries to homes all over Livingston. His home was behind the store at 212 W. Church St., across from the city hall and post office. The store telephone number was ‘92’ and the Cannon home was ‘9.’ During World War II he bought lots in town and built 25 rent houses. He was a member of the Christian Church.

“By 1930 he had acquired 375 acres of mostly wooded areas from Drew Avenue to Long King Creek. He owned land on both sides of Hwy. 190/Church Street that extended north to Martin Luther King Street and south to Choates Creek. This area was known as ‘West Livingston.’ Both sides of Hwy. 190 were fenced in for his 50 head of cattle and horses. He created the pond area for water for his cattle. He gave the school district the land on Hwy. 190 for their high school, junior high, auditorium and football field in the mid-1930s. For 20 years, he sold off pieces of his property for development and improvements in Livingston for homes and new businesses.

“S.J. Cannon was active in various civic organizations of Livingston and Polk County through the years. He served 12 years as a city alderman when Ollege Morrison was the mayor. He also served two terms as president of the Polk County Chamber of Commerce, the only person to do so in the history of the chamber.

“His advice was sought by younger men in the county on business matters, as well as being recognized as a man of unique ability and unquestionable integrity. He served the public without a mark against him which was a record worthy of any man’s ambition. At his death, his funeral was conducted by the ministers of the Central Baptist Church, Livingston Church of Christ and the First Methodist Church. He truly loved Livingston.

“Pattie Willis Cannon was born in Livingston in 1883. Her home was on the corner of Church Street and Drew Avenue. She attended the Livingston Public School and graduated from Kidd-Key College in 1899. She grew up in a home that was dedicated to public service. Her father was an early city alderman that had the city council meetings in the dining room of his home.

“Pattie Cannon served many years as the tax assessor and collector for the City of Livingston. She was a charter member of the Eastern Star and a member of the Christian Church. She worked beside her husband in the grocery business in making it an outstanding success for 28 years. In 1920, she and her mother were the first women in Livingston to register to vote, much to the chagrin of ‘ole boys in the courthouse. She was one of the first women to get a driver’s license and own an automobile. They celebrated their 50th wedding anniversary in 1952 with their two daughters, Lois Cannon Norwood and Ruth Cannon Pritchard.

“She was a real Southern lady and always showing graciousness, hospitality, compassion, concern and genuine interest and love for the citizens of Livingston. She had a strong heart for helping others and wanted nothing more than to make everyone’s life better.”