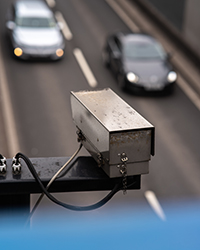 Solely as an unbiased, investigative tool

The Livingston City Council approved a resolution authorizing a contract agreement with Flock Group Inc. for the acquisition, installation, maintenance and monitoring of five automated license plate recognition cameras during its April 12 regular meeting. The contract agreement was approved following a presentation by Livingston Police Chief Matt Parrish and Lieutenant Marty Drake regarding the use of the automated license plate recognition cameras.

“Twenty-five years ago, when I started in law enforcement everything was done differently than it is now. We’re trying to take the police department to the next step with technology,” Drake said. “I’ve been talking to the chief about license plate readers. The program that I looked at and presented to the chief is 100% unbiased. It only gets the license plate number and color of the car, nothing to do with the driver.”

Drake compared the alerts from the cameras to other types of alerts received today such as Amber alerts, civil alerts, camo alerts and blue alerts. “It’s a really, really good tool for identifying stolen vehicles.” He informed Council with 100% assurance that the cameras are not used for traffic enforcement but only used as an investigative tool.

Referring to other police departments that use them, including Huntsville, Woodville, Liberty, Cleveland, Conroe and Memorial Village, Drake said, “I don’t see anything but benefits. I think it could be a valuable tool for the department and the community.”

Turning to the Livingston Volunteer Fire Department and noting that the last increase was in 2007, Council approved an increase in the amount paid per call to members of the LVFD. This will include emergency calls, non-emergency calls and drills. City Manager Bill S. Wiggins reviewed amounts paid by other departments and looked at LVFD’s number of calls for the last three years. Based on recent call numbers, the amount paid out totaled $36,620. The approved increase in amount paid per call will total $59,976. “We’d budgeted $46,000 and this is more than what we had budgeted, but it’s what I think we need to do to take care of our fire department,” Wiggins said.

“We appreciate the consideration. With gas prices going up, this will help offset the fuel costs and will help to recover the costs of out-of-pocket expenses for fuel and such,” Livingston Fire Chief Corky Cochran said.

Assistant Chief John Haynes agreed. “I want to thank y’all for your support through the years and we’re going to try to remain worthy.”

A public hearing was held on an appeal by Coast 2 Coast Signs regarding the denial of a sign permit for an off-premise pylon sign at 1620 W. Church St. to advertise for Panda Express and Starbucks. The city’s ordinance allows for on-premise signage but prohibits putting signage elsewhere so it was automatically denied. According to Wiggins, what the company’s wanting to do is put up a large sign on the Hwy. 59 feeder road near the side entrance to the Walmart parking lot. “They got permission from Walmart to put it there. It’s 65 feet in the air. Any exceptions (to the ordinance) we do on a case-by-case basis. That’s what we’re doing here.”

City Attorney James W. Wright apprised Council that the subject of on- and off-premise signs is presently before the U.S. Supreme Court. Following some additional discussion, Council chose to defer a decision regarding action on the appeal until the Supreme Court’s ruling is known.

In what was considered a housekeeping item, Council approved the mayor’s appointment of Derrick Richardson as electrical inspector. Richardson was named the city’s electric superintendent following the retirement of Dewayne Oates.

Wiggins updated Council on various projects and events during his monthly report. He apprised everyone of the upcoming “Serve Together” service event, formerly known as “Rise Up,” scheduled for April 30 and May 1 which is a concerted effort by the congregations of multiple local churches to conduct service projects throughout the community. The project is under the leadership of Kevan Wood. He also reminded everyone of Livingston Trade Days slated for May 14-15 at Pedigo Park.

Wiggins reported that the April sales tax report from the state comptroller was received on April 8, reflecting $319,662.54 for the month of February, a 14.44% increase from the previous year.

A number of improvements have been made at Matthews Street Park, Wiggins reported, including replacing the fence around the golf course and putting out mulch all over the playground area. He reported that the Livingston Youth Golf Association will begin using the old ballfield area and that the old Daisy House will be demolished upon receipt of a letter from the Girl Scouts declaring no ownership of the structure.

The City’s Easter Eggstravaganza was held April 9 at Pedigo Park. Festivities included an Easter egg hunt with 20,000 plastic eggs filled with candy and prize tokens, pictures with the Easter Bunny and bike drawings. Additionally, the Trinity-Neches Livestock Show for local FFA and 4-H students was held March 28 through April 2 at Barney Wiggins Memorial Park and raised $605,249.

Other items of note from Wiggins included news of the closure of the Livingston location of Church’s Chicken, one of 10 in Southeast Texas that was closed, and the upcoming May 3 opening of Indulge Kitchen & Lounge at 705 N. Washington by Owner Aretha Horton.

Other business included approval of the minutes of the March 8 regular meeting and accounts over $500.