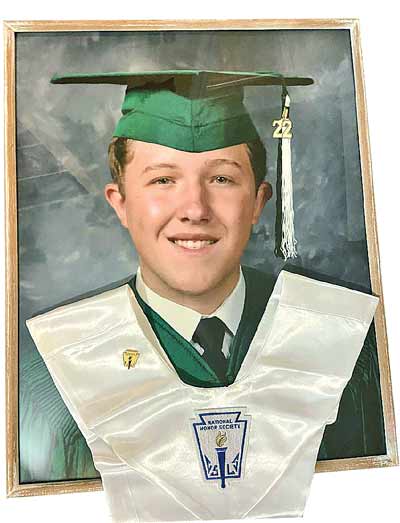 Cole OverstreetBy Brian Besch
This email address is being protected from spambots. You need JavaScript enabled to view it.

It’s been two weeks since the fatal vehicle collision that took the life of Livingston High School senior Cole Overstreet. The accident was a head-on collision with Roy Grant Wagner, 40, of The Woodlands, who fled the scene after crossing over the road’s centerline.

Wagner was charged with failure to stop and render aid resulting in death, along with unlawful carrying of a weapon and possession of marijuana.

His criminal history reflects multiple arrests for DWI, and alcohol has been suspected to play a role in his most recent troubles. According to documents received by the Enterprise, his first DWI was in August of 2001, when he would have been 20 years of age. He received six months of probation from Harris County.

His second DWI charge was 10 years later by the Pasadena Police Department, where he received a year of probation. In March of 2018, Wagner was charged with DWI and was convicted on a lesser charge, receiving two years and three days probation. Just 10 months ago on Dec. 12, he collected a DWI charge for the fourth time. He served eight days in jail.

Wagner quickly made the $251,500 bail in Polk County and is free once more. Cole’s parents, Tad and April Overstreet, have a fear that their worst experience could be shared by others.

“I don’t want anyone to forget our son. I don’t think they would, but he didn’t deserve this,” April said. “For this man to be out there, it can happen to somebody else and we don’t want that to happen because it is the most painful thing we’ve ever been through in our lives.”

Without Wagner present at the scene of the crash, he could not be tested for alcohol.

“This guy ran after four priors and it benefits him to run from the scene,” Tad said. “Instead of getting harsher punishment for fleeing like it should be, it is the other way around. It is harder to punish him and harder to make anything stick. It should be the complete opposite. There needs to be something in place where if someone has a history — I mean, four? That is a long history of doing the same thing again and again and again. Whenever they flee, there needs to be some sort of automatic maximum punishment of whatever charges. The way our system is set up now, it is geared toward him having an easier time by doing the wrong thing and it benefits you.”

The Overstreets said they have heard reports that Wagner has received lenient sentences in the past because he is a veteran and the incidents have been blamed on post-traumatic stress disorder (PTSD). What the parents do not understand is why Wagner is allowed to drive if his mental issues are so troubling.

“I don’t think they have the proof they need because he knows how to work the system,” April said.

Earlier reports that Wagner turned himself in two days later may not be the case. The Overstreets have heard information suggesting law enforcement knew of Wagner’s location and gave him the option to surrender.

Tad said he has tremendous respect for those who have served in the military, but that it should not exempt anyone from committing crimes.

“I say ‘thank you’ whenever I see someone with a veteran hat on, but where is the honor and where is the integrity in killing someone — an innocent person — and running away? There is no honor in that,” Tad said. “I am thankful for his service a long time ago, but he needs to pay for his crimes. He hasn’t served much jail time so far and that is the problem. He hasn’t learned any lessons.”

The parents have asked officials if Wagner still has the right to drive. They have yet to be told he cannot. Instead, it was relayed that there was a breathalyzer in Wagner’s truck at the time of the accident. However, it had been disabled, as he was no longer required to submit a test. Tad and April were told law enforcement wasn’t sure there was enough evidence to convict Wagner’s fourth incident in Montgomery County, but felt Harris County would revoke his license because he was still on probation there from his third incident. In Montgomery County, law enforcement was said to have found him passed out on the side of the road in the early morning hours with the engine cool.

“This guy is not somebody who has made a little mistake and turned himself in,” Tad said. “It doesn’t seem like there had been any results because all he was looking out for was himself. Our son is gone and there’s nothing that can be done about that. Something we really talked about is how we can make a difference, and No. 1 is we can protect other people and their families from this guy doing the same thing to them.”

On Wednesday, Tad and April were presented Cole’s induction certificate for the National Honor Society. Cole had plans to attend college at Sam Houston State University to study engineering.

“He was a follower of Jesus,” April said. “He always walked the walk and didn’t just talk the talk. He loved everybody. It didn’t matter if you were a football player or a band kid or everybody in between.”

Tad said many of Cole’s classmates have told them he would always be the one to turn situations around by remaining positive when something negative occurred.

“He was a really good, respectful young man,” Tad said. “He had his whole life ahead of him. He was a better man than me. I learned from him through watching the way he acted. It was just amazing to me how he was mature beyond his years.”