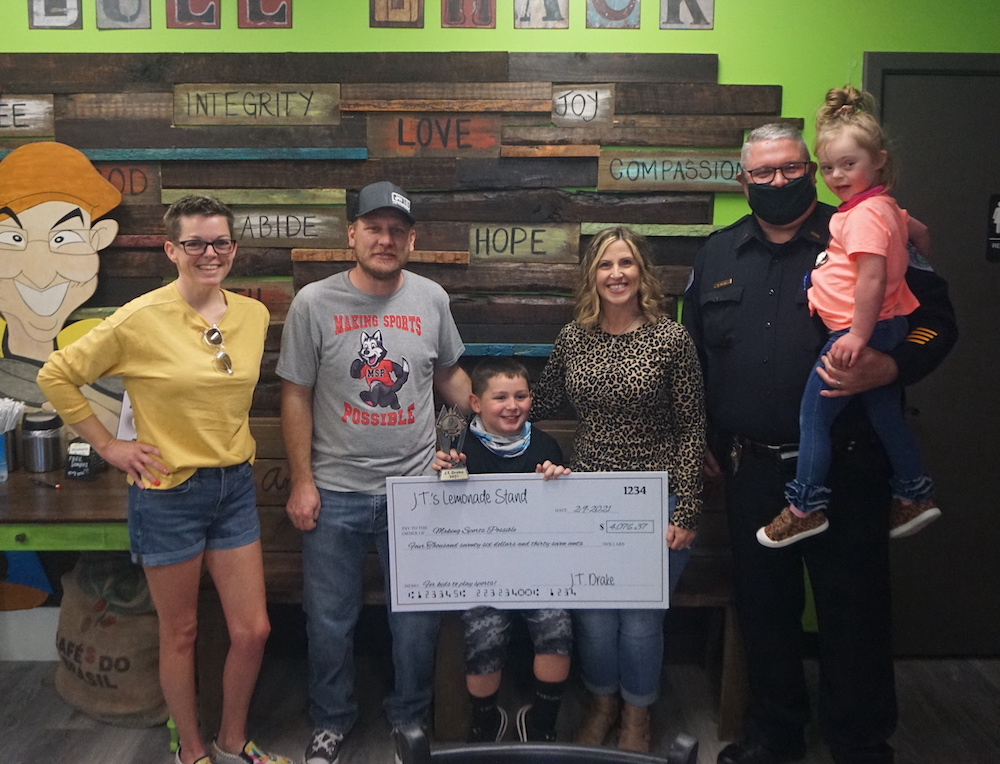 JASON CHLAPEK I PCE JT Drake (seated) recently organized a lemonade and hot dog stand that raised more than $4,000 dollars – all of which went to Making Sports Possible. Jason (second from left) and Gisele Ivy (third from right) are the co-founders of MSP, which helps underprivileged youth in Polk County pay for sign-up fees and equipment to play sports. Also pictured are JT’s parents Rachel (far left) and Marty Drake (second from right) and his sister Sully (far right).

JT, 7, plays Little League in Livingston and Select in Kingwood. Recently, the son of Marty and Rachel Drake did something that most children his age wouldn’t think about doing – start a fundraiser.

JT was the brainchild behind a hot dog and lemonade stand that brought in more than $4,000. The money isn’t going to his college fund either.

Each dollar of the $4,076.37 that JT and his family raised that Saturday afternoon was donated to a local nonprofit organization called “Making Sports Possible.” Gisele and Jason Ivy are the heads of MSP, which provides funds for sign-up fees and equipment for underprivileged children who otherwise can’t afford to play.

“I wanted to make sports possible so more kids could play,” JT said.

The Drake family began selling hot dogs, cookies and lemonade on their front lawn at 10 a.m. that day and stopped selling at 3 p.m. While the entire amount was not raised in that five-hour window, there were other methods people used to donate to JT’s cause.

“People also mailed money in and we had a lot of online donations,” Rachel Drake said. “We posted on social media that we had a lemonade stand.”

Last Tuesday, Gisele and Jason Ivy presented a trophy to JT at Bull Shack Coffee and Smoothies. The couple also has a connection with the Drake family, which includes younger daughter Sullivan, or “Sully.”

“We know Marty and Rachel from coaching the Go-Getters with Marty,” Gisele said. “We know their heart. We were surprised when we found out that JT wanted to do it, but we weren’t surprised that they did it because JT is such a sweet boy. It’s a blessing and perfect timing.”

MSP was organized in 2017 and started paying for underprivileged Polk County youth to participate in sports in 2018. The organization partners with youth basketball, baseball, football, soccer and softball leagues in Polk County.

“We saw the need to pay for some kids to play sports when my nephews played,” Jason said. “You would have kids show up one year then not show up the next because they didn’t have the funds to play.”

Jason Ivy graduated from Livingston in 1998 and joined the Army, where he served for 10 years. He and his wife, Gisele, LHS Class of 1994, moved back to Livingston in 2008.

“One year we had a pair of brothers on a team that had to share the same bat, the same glove and the same helmet,” Gisele said. “They couldn’t be on the field at the same time.”

Those instances inspired Jason and Gisele to put their heads together and try to figure out a way to not only make sure Polk County youth didn’t have to share playing equipment, but also make sure they had enough money to sign up to play.

“We reached out to friends and tried to fund it ourselves,” Gisele said. “But then we got together and decided to start this nonprofit.”

MSP also has a governing board of six members. In the previous three years, the organization has helped an average of 50-60 youth participate in sports.

“Almost every member on our board has been a member of the board since we started this organization,” Jason said. “Everybody continues to be an internal part of what we do. Without them, this wouldn’t be possible. We’re grateful for each and every board member. It’s a big family-oriented organization. The more people know about us, the more the funds increase. We want to help more kids and reach out to the community.”

A year ago, MSP was planning its annual color run fundraiser when Covid-19 hit. That fundraiser, as well as others, were canceled.

MSP also had raffles, motorcycle rides, sold tacos and set up booths at Hometown Christmas. The timing of JT’s fundraiser couldn’t have been more ideal.

“It was a God-send that he decided to do that right then and there,” Gisele said. “We were pretty low on funds and this is our biggest sign-up season because it’s baseball, softball and soccer all at the same time. This is the time where we have the most kids, so for him to decide to do that was amazing.”

According to the Ivy’s, JT’s fundraiser was the only fundraiser that MSP had this year. In addition to baseball, JT also plays basketball and golf, but baseball is his favorite.

JT plays on the coach-pitch level in both Little League and Select. Although he can play catcher, any of the three outfield positions, shortstop or third base, JT has his favorite position.

“My favorite position is third base because you have to have a strong arm in order to get the ball over to first base,” he said.

After the five-hour fundraiser, there was still plenty of food left. JT’s generous nature kicked in when he and his family were deciding what to do with the leftovers.

“We had leftover hot dogs and we gave them to people who didn’t have a house,” JT said.