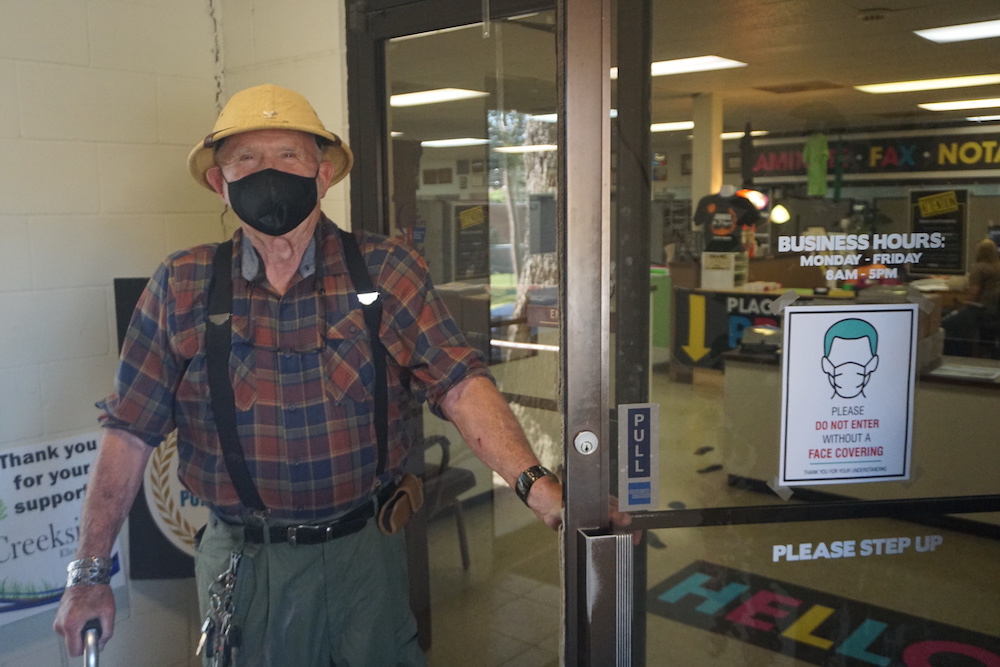 LIVINGSTON — Ronald Tolls has held a few titles during his 80 years of life.

Among those are U.S. Army Colonel and Doctor. Tolls has an unofficial title these days — Covid Crusader.

Inspired by friends who relocated from Houston to Livingston during the initial outbreak of Covid-19, the retired doctor is taking it upon himself to help prevent the spread of the virus around the Livingston community. He believes it is easier to spread than other illnesses as well.

“The first thing that happened is we had a couple that I vaguely knew from our church who were displaced from Houston. They’ve been with us ever since,” Tolls said. “I became aware of it acutely that Covid had spread and was highly communicable. People who were in nursing homes have a high fatality rate. I’ve since been following the CDC recommendations and I think they were off track for a while because they thought it was spread like a common cold or the Spanish Influenza. But in fact, it can be spread via aerosol, which is akin to the smoke that we smell around a bonfire. In other words, it’s far beyond the six feet.”

Tolls has taken his mission to the Livingston Walmart. He believes the virus is more likely to be spread there as opposed to churches or schools.

“In our church, we have social distancing,” Tolls said. “But at Walmart, it has all fallen on the wayside. About a month ago, I did a tally at Walmart and I found that 50% of employees were wearing their masks improperly. I’m a staunch believer that the No. 1 spread of Covid is not in our churches or in the open marketplace. It’s in shops. Walmart is the principal retailer in town. A third of the people that come in are not even wearing masks. I am eager to raise awareness and what I’m proposing is that, with all respect to Walmart because next to (Livingston ISD) they’re our No. 1 employer in town, we get a systemized program at Walmart. They’re examples to the rest of our community. They can beat their chest and say ‘Look what we’re doing. We’re not killing you by selling cigarettes as much as we’re trying to save you from Covid.’ Cigarettes will shorten your lifespan by 10 years and those very same people have the audacity to go out and have a team on Relay For Life.”

During Tolls’ time at the London School of Tropical Medicine & Hygiene, University of London, he learned about a man named Sir John Snow. During the London Cholera Epidemic of 1854, Snow figured out a way to slow down the spread of the disease.

“In the social area of London (in 1854), there were 500 fatalities in 10 days,” Tolls said. “Somebody asked John Snow what they should do about it. He said to take the handle off of the Broadstreet Pump. He had a box of pins and a map of that region. Essentially, in 1854, John Snow was a couple of generations ahead of his time. I will never be able to prove things like he did. I will never be able to prove with pins like he did. What I would like to do is promote a program at Walmart and other businesses will follow suit. I would like to see them do it in good face. I want our Walmart to be an example to the community.”

Tolls retired from practicing medicine three years ago. In addition to Walmart, he is interested in talking to other high-traffic businesses in Livingston.

“I think there’s something people need to know about and I think they need to know how to stop the spread of Covid,” Tolls said. “It’s killed 200,000 Americans. It behooves us to do something about it. I’d be quite willing to talk to other stores as well.”

He’s staying on the crusade.