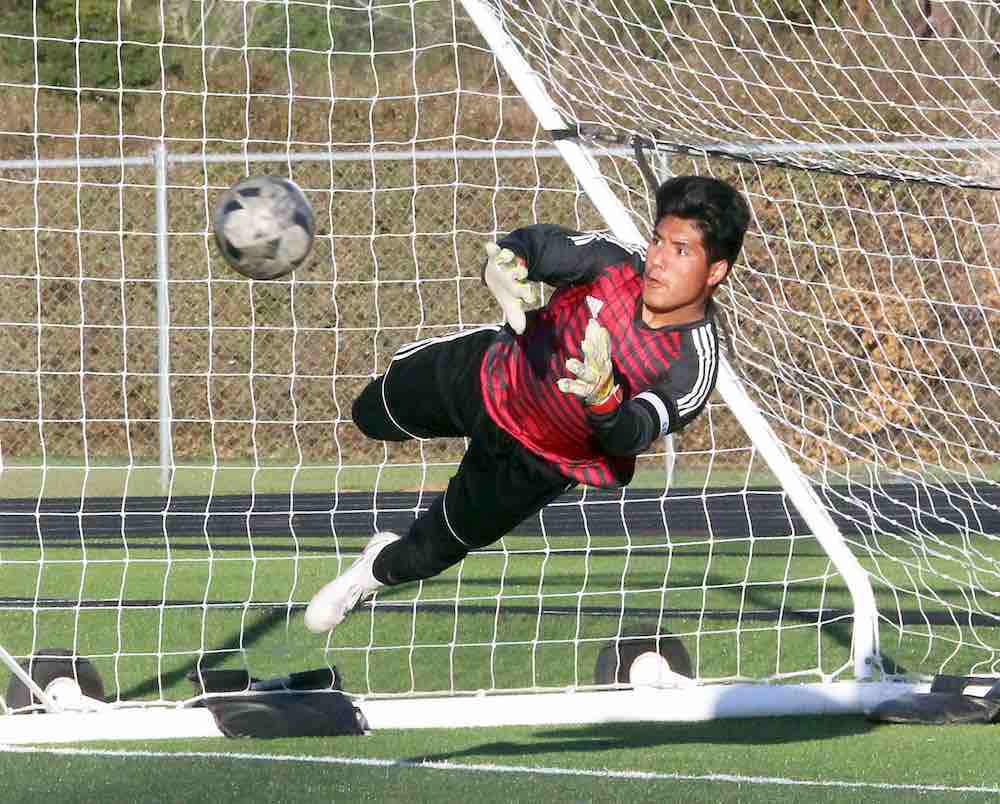 LARRY LAMB | HCC Crockett goalie Antonio Cruz makes a diving save against Henderson in a bi-district game on Thursday.

The Crockett Bulldogs capped the regular season with five straight wins but couldn’t keep their streak going against the Henderson Lions in the first round of the class 4A state soccer playoffs.

The Bulldogs and Lions battled back and forth down the field for the first 40 minutes. At halftime, the game was locked in a 0-0 stalemate.

Crockett continued to struggle with finding an offensive spark early in the second half while Henderson finally found the back of the net at the 32:04 mark. The Lions tacked on an insurance goal with 16:36 left.

“In my opinion he won man of the match. He kept us in the game for as long as he could and he made absolute incredible saves. He’s going to be an elite goal keeper if he really wants to. Luckily I’ll have him back next year,” said Gutierrez.

Henderson, which finished second in its district, sits at 14-8-4 overall going into the second round against Paris.

While seeing the season end is always heartbreaking – especially for the senior trio of Alex Orozco, Pablo Ayala and Salvador Lopez – Gutierrez says the Bulldogs can be proud of their accomplishments.

“This is the best season the boys have ever played. This is the best they’ve ever done in the playoffs. The boys have made a huge improvement from last year and prior years, and even from the beginning of this season. This is the strongest team Crockett has ever had and it’s only going to get stronger,” said Gutierrez.

Crockett finished third out of eight teams in District 16-4A with a 10-4 record and ended the season with a 14-9 mark.

As expected, Palestine prevailed over Carthage 2-0 in the first round Thursday. Livingston takes on Center in bi-district Friday at Hudson. Diboll, the fourth place seed, faces Kilgore.

Crockett, a relatively young program, is marking its fourth year of UIL sanctioned competition. The Bulldogs made the playoffs as the fourth place seed their first two seasons and were poised to earn a playoff berth last season when the UIL suspended competition due to the pandemic.

Gutierrez noted that the Bulldogs’ district losses were to Palestine and Livingston, both 4A schools.

“We only lost to two teams in district (Palestine and Livingston). We’re blowing teams out that in previous years had blown us out such as Hudson and Madisonville. In our last five games we have scored 18 goals and have only allowed three goals,” pointed out Gutierrez.