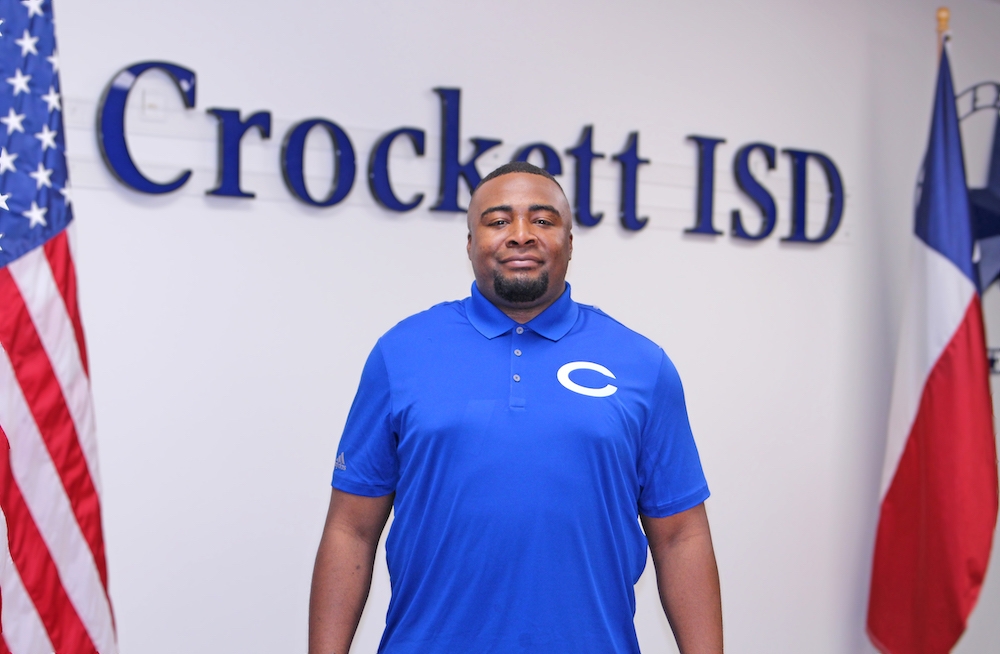 Dixon, one of more than 130 applicants, was officially approved by the school board Monday night.

The new AD was introduced to athletes Tuesday and is expected to start full time the last week of March.

Dixon, a Lufkin native who played college football at Texas A&M, comes to Crockett from class 5A Wylie East High School where he was defensive coordinator/assistant head coach the past three years.

“They hadn’t won in years and when we got there we flipped it over. That was the first time they’d been in the playoffs in about 15 years,” Dixon said of Wylie East’s program.

He was awarded a scholarship to Texas A&M University where he was a four-year starter. He first played cornerback for the Aggies, then safety and linebacker. One of Dixon’s teammates was former CHS sports star L’Tydrick Riley.

After graduating from A&M, Dixon said he had some opportunities in the NFL that didn’t pan out so he started working in the Aggies weight room for strength and conditioning coach Dave Kennedy.

“That’s kind of what got my coaching itch-bug started,” said Dixon, who then returned to his high school alma mater as assistant football coach for Quick, who had moved up to head coach after Outlaw’s death.

He remained at Lufkin for about five years before accepting a defensive coordinator position with 5A Dallas Molina.

Dixon credits his high school coaches – Outlaw and Quick – for influencing his career choice. “ I don’t have any family ties to coaching. I think I got that coaching in me from those guys. They are my coaching family,” he said.

Describing his coaching philosophy, Dixon said, “It’s discipline, commitment, loving each other, playing hard-nosed football most importantly, but we’re going to be very, very much a class-act. We’re going to have great character when we play the game.”

Dixon said his decision regarding a run or pass oriented offense for the Bulldogs will be based on “what we have in the cupboards” personnel-wise.

“I do know we have a great athlete at quarterback and I do know we have great speed so that all aligns to being able to spread it out a little. I’m not a guy who’s going to walk in and say you’ve got to do this, this and this. I’m a guy who says let’s evaluate what we have and let’s go for it like that,” he said.

Starting his career at Lufkin under coach Quick, Dixon said he learned the “fundamental ways” of defense.

“We started with the basics of a 4-3 defense. But here in Crockett we have such great speed I believe we’re going to be able to continue what coach (Gary) Grubbs has done with the 3-4 defense. I really love the speed that we have and I love his premise and philosophy. I think we’re going to blend very well. He’s done a really good job of having a solid foundation of defense so we’re going to carry on, but very similar to what we’re going to do on offense.”

Once Dixon gets settled in, he plans for the Bulldogs to participate in 7-on-7 and have them competing in a higher bracket this year. “We want to play a more competitive bracket with 5A-6A early on and then get into an SQT in the 3A-4A bracket,” he noted. “We know what kind of children we have. We have the kind that other people would pray to have.”

A summer strength and conditioning program is also planned and some of the junior athletes will attend football recruiting camps to prepare for their senior seasons. “From there we’ll move into fall camp pace,” he said.

Dixon has always been impressed with Crockett’s rich athletic tradition.

“It’s always been tradition-rich. I know the kind of athletes that come out of here. I know the story of the Crockett Rocket (Claude Riley) and I know L’Tydrick Riley. I know all those Rileys. It’s East Texas. Smells like home, feels like home. Ain’t nothing like being in God’s country. We build a certain brand of boy and girl out here, a certain brand of woman and man. I think these children are a special cut from Texas, I really do.”

Regarding the high amount of interest the position generated, Crockett ISD Supt. John Emerich said applications continued to trickle in after the cutoff two weeks ago.

“I think that’s a testament to what people think Crockett is and can be,” Emerich said of the 300-plus applicants. “I had lots of folks to choose from and it was a pretty difficult process. I went through every single application and read those.”

Emerich said he received a number of calls recommending various coaches for the position.

“But this man (Dixon) was actually not one of those that was recommended to me. There was something about his application that stuck out to me,” said Emerich.

“I narrowed it down to 18 and interviewed them. Then I narrowed it down to five finalists that I brought in and talked to them more extensively. This guy (Dixon) just kept rising to the top after that whole process. I think this is the right fit for me, which means it’s the right fit for Crockett, for our kids and our community. I really think he’s going to be a good partner of mine in helping to fulfill the mission that I’d like to see happen here in Crockett. I think we share the same vision on that kind of thing,” he continued.

Emerich said in closing, “I’m excited. I’m excited for our kids here, Crockett ISD and for the community. This man is just what we needed here. I think he’s going to be the key to helping us get to the next level. You know what we have here naturally and if we tweak a few things I think we can really see some different results. This is the man to help us do that. That’s why I brought him forward to the board. It seemed like the board thought that way too last night after they met him. We’re excited to see what he’s going to do here.”

Dixon summed up, “I am very grateful to Mr. Emerich. It wasn’t easy. He made me sweat a little bit during the process and pressed me really hard. I think he saw my heart and saw my passion, and I think that’s how we got here today.

“I’m looking forward to meeting members of the community. They are going to get my best at all times and I have nothing but their child’s success on my mind. I look forward to being out in the community and building up great relationships and building and enhancing our great traditions that we have here. Go Bulldogs. Go Big Blue.”