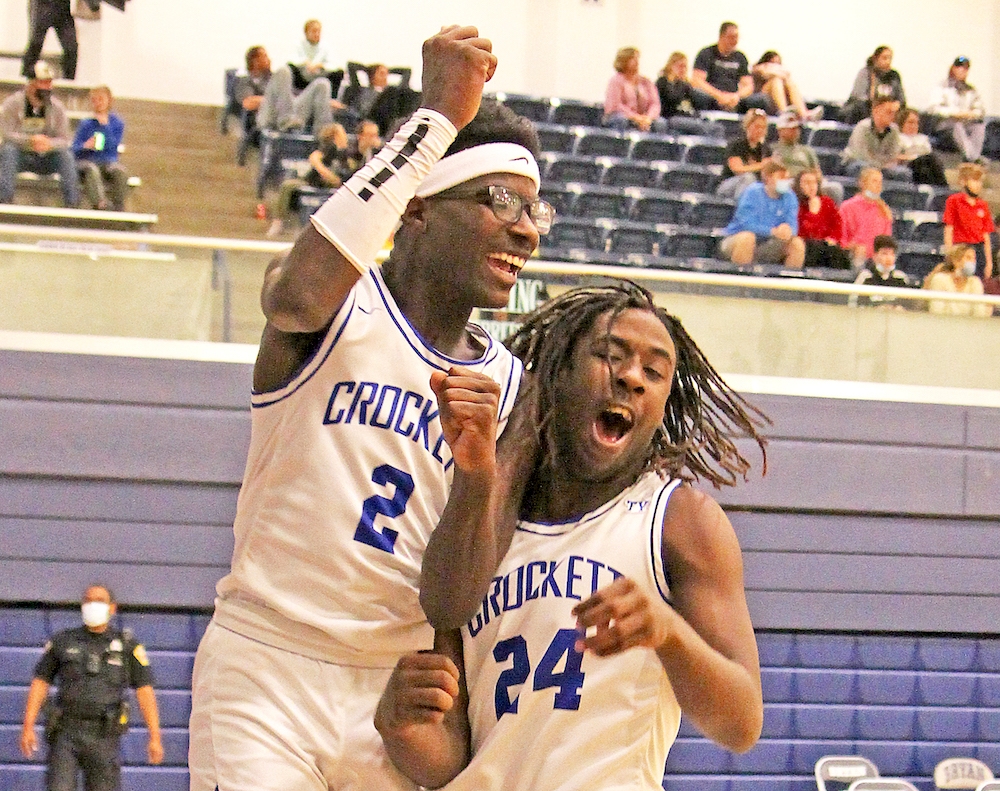 The Crockett Bulldogs dug themselves an early 12-0 hole, climbed all the way out and squeezed past Rogers 49-47 in bi-district basketball action Tuesday, Feb. 23 in Bryan.

With the game tied at 47-all, sophomore Jadyn Collins converted an offensive rebound and putback with :06 left to give Crockett a two-point cushion.

A deflection by Collins on a last-second trey by Rogers sealed the victory.

“Rogers is a tough team. They played hard all the way down the stretch. I was telling my guys that we don’t need a repeat of the Franklin game,” coach Jordan Caldwell said in reference to a buzzer shot that lifted district champion Franklin to a 52-51 victory over the Bulldogs.

The Bulldogs trailed 14-4 after a quarter but dominated the second 16-5 to slip in front 20-19 at intermission.

Caldwell’s crew opened up a five-point lead late in the third only to see Rogers drain a three-pointer in the waning seconds to make it 34-32 heading into the final period.

Early in the fourth Rogers wrestled its way in front 35-34 on a three-point play but Crockett answered with its own to regain the lead with 6:05 left.

The rest of the game was a back-and-forth battle. Crockett never trailed, but Rogers tied the score four times.

Crockett took its biggest lead of 45-40 on a putback by “big man” Chris Purvis and a three-point play by Collins at the 3:34 mark.

Rogers hit a trey on its next possession and tied it at 45-all with 2:18 left.

After a travelling call on Crockett gave Rogers possession, the Eagles put up an errant shot. Ja’Lyne Carruthers grabbed the rebound, took it down the floor and sank a shot off the glass to put the Dogs up 47-43 with 1:20 left.

When Rogers tied it back up at 47-all with 55 seconds left it appeared the battle would go into overtime.

Crockett ran down the clock to :14 before Carruthers drove the lane and put up a shot that rolled around the rim and out.

But luckily, Collins collected the rebound and put the ball in for the game-winning bucket with six seconds left.

This was only Crockett’s third game with its roster back at full-strength after playing half of its district schedule with a skeleton crew.

The rust was evident early as the Dogs, plagued by turnovers and missed shots, didn’t dent the scoreboard until the 1:45 mark in the first quarter. Sophomore Courtney Byrd broke the scoring drought and junior D.J. Walker converted a steal into a layup with 10 seconds left, but the Bulldogs still faced a 14-4 deficit at the end of the quarter.

Rogers seemingly couldn’t miss a shot in the first quarter but then couldn’t hit the mark in the second as the momentum shifted to Crockett.

After being held scoreless in the first half, Collins booked 12 points after halftime to lead the offense.

Walker finished with nine, followed by Carruthers with seven, Ty White and Purvis with six apiece, Byrd with five, and Tayshawn Simon and Keshun Easterling with two each.

The Bulldogs made seven of 11 free throws while Rogers hit seven of nine. Most of Rogers’ free throws were by senior Ty Sebek, who knocked down six of seven.

Caldwell was encouraged by the resiliency his team exhibited.

“For the most part my guys never gave up but we still have a lot of work to do,” said Caldwell. “We started off horrible and got down 12-0. Then we went on a 20-7 run to take the lead at halftime.

“We started playing our style of basketball and pushing the ball. I told the guys if you make a mistake just be sure you’re moving fast. I think that was the difference late in the game. We kept pushing the ball and then we started getting some rebounds at the bottom too.

“We’ll be okay. We just have to keep playing hard and fighting hard,” said Caldwell, whose team faced undefeated No. 9 Malakoff in the area round Thursday.