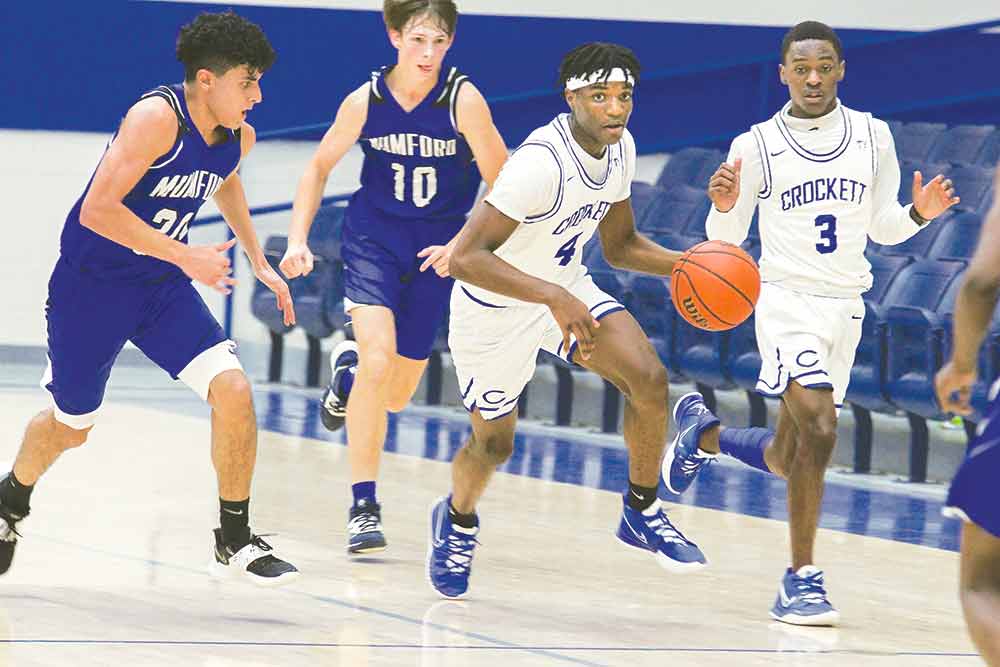 Crockett’s Delvin Walker (4) brings the ball down the floor against Mumford in the season opener. (Larry Lamb - HCC)

Making a quick transition from football to the hardwood, the Crockett Bulldogs dropped their season opener to Mumford, 55-51 and then won their next two over Anderson-Shiro, 70-50, and Navasota, 58-49.

In their debut at The Hop last Tuesday, the Bulldogs led Mumford 33-29 at the half and opened up a 10-point lead midway through the third only to see it dwindle to 46-43 at the end of the quarter.

“We were knocking on the door to put them away in the third and they fought back. We don’t communicate and miss a three. Then we give up a three and go eight minutes without scoring a basket,” said new Bulldog head coach Drae Murray.

Senior Delvin Walker led the Bulldogs with 16 (1 trey) and junior Courtney Byrd was close behind with 12.

Rounding out the scoring were sophomore Jarodrick Holmes with 9 (1 trey) and senior Tayshawn Simon 7 (1 trey). Juniors Ajani Ellis 3 and Bredron Tucker each drained a trey, while senior Keshun Easterling and sophomore Iverson Rischer tossed in 2 apiece.

Mumford (2-1), ranked No. 4 in this week’s TABC class 2A state poll, was led by junior LeAnthony Dykes with 24 points and senior Desmond Gamble with 16, including four treys.

Crockett’s returning players are Walker, Byrd, Easterling, Simon, Tucker and junior Jadyn Collins, who was “banged up a little bit” and sat out the opener.

Senior Tamarion Manning and sophomore Antwaain Boston round out the varsity unit.

Murray is expecting big things from his underclassmen.

“Jarodrick (Holmes) is a sophomore who can really shoot the ball. He had a big three for us against Mumford, but it just wasn’t enough,” said Murray.

“We’ve only had two practices with everybody since football just ended. You could tell how that affected us fatigue-wise. We had the lead up to 10 in the third quarter and fatigue        finally

kicked in,” said Murray.     “We’ve got a lot of things to correct on the defensive end as well as defensive rebounding. The good thing is those problems can be cleaned up. Once we get all the kinks worked out we’ll be fine.”

Murray said the Bulldogs’ strength will be their ability to run.

“Our style is being a fast-running, up-tempo  team. The times when we made runs (against Mumford) were because we able to get those defensive rebounds, run and push the ball up the court. We had a lot of easy buckets that helped us get the lead to 10 by just getting the ball out, running and making the easy lay-ups. Once fatigue set in, that went away from us.

“After college, I wanted to test the waters playing basketball overseas for a couple of seasons,” said Murray, who decided to get into coaching high school sports. He was an assistant at Bryan for

one year and then returned to his high school alma mater for a three-year stint before landing his first head coach position at Crockett.

“I’m familiar with Crockett. I used to come up here and play in the Outlaw hoops tournament which we won the first two years when they started it,” recalled Murray. “The Crockett community has  been good to me and it feels like my second home.”

The Bulldogs return to action Tuesday, Nov. 30 at home against class 4A Ferris. The Dogs get their first taste of tournament competition in the Madisonville Classic Dec. 2-4.