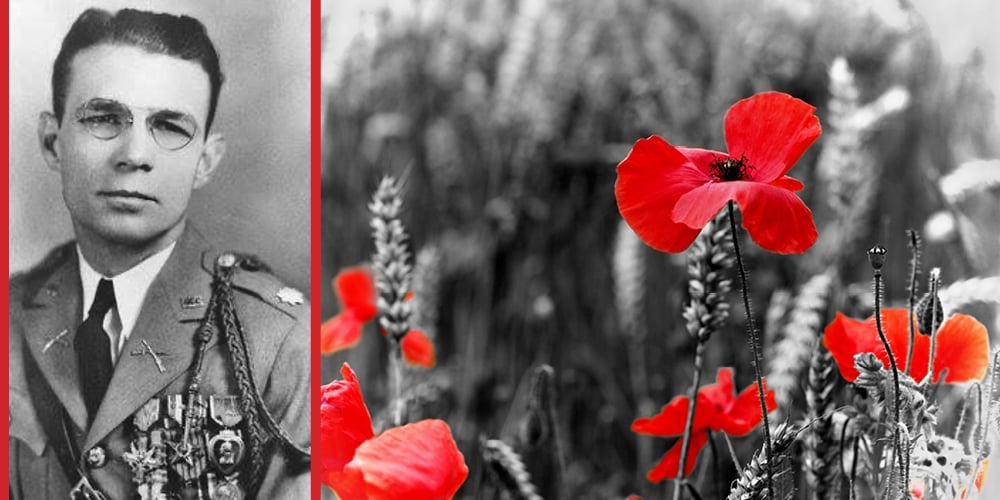 The Downtown Crockett Association is a non-profit organization comprised of business owners and residents whose goal is to promote the revitalization and beautification of the downtown area. Recently, the group commissioned artist and owner of Filthy Gringos, Robin Ogg, to create hanging banners that memorialize several former residents of Crockett who were influential to both local and national history. One of those honorees is George Lawson Keene.

Keene was born in Crockett, on September 23, 1898, into a family quite familiar with military involvement. His great-grandfather, Edward Keene, participated in the Texas Revolution. His mother was the great-niece of General Stonewall Jackson, and his grandfather was a veteran of the Confederate Army. Keene grew up hearing stories of wars and heroes, so it came as no surprise that the 16-year-old high school graduate chose his sense of duty over higher education.

Keene had planned to enroll in his father’s alma mater, Texas A&M, but the growing war in Europe led him to follow a different path.

On March 24, 1917, Keene enlisted in the Army at Fort Sam Houston in San Antonio. Keene received basic training during his assignment to the 9th Infantry, but after the formal declaration of war with Germany, he was reassigned to the First Division that departed for France in June of 1917. Keene was the first and youngest American combat soldier to set foot on French soil.

Keene was stationed on the front lines for over twenty-six months and took part in five major engagements. He swiftly rose through the ranks from platoon leader to Colonel. Keene’s commanding officers described him as a “born leader of men,” with “sound judgment and cheerful nature,” displaying “exceptional courage in directing his men when a hostile counter-attack was imminent.” For his multiple wounds and gassing during the battle of the Argonne Forest, Keene received the Purple Heart, and his actions in combat resulted in two Silver Stars and a Distinguished Service Cross.

Keene received the Silver Star with Oak Leaf Cluster for his bravery and outstanding military service during his time in France. He also received the Cross of Honor, the French Croix de Guerre with Palm, Knights of Verdun, Tadac St. Mihiel, and the French Commemorative Medal.

Keene returned to the United States in September 1919 and was discharged at Camp Zachary Taylor, Kentucky, in March 1920. Disabled due to his wounds, Keene was able to enter a rehabilitation training program. He chose classes in watchmaking and jewelry and relocated to Dallas, where he trained at the Southwestern Watchmaking School. After working in Dallas for a year as a jeweler, Keene returned to Crockett. He married his childhood sweetheart, Dewey G.

Kennedy, on November 11, 1921. They lived for a time in Dallas, returned briefly to Crockett, and in 1926 relocated to the Goose Creek community south of Houston, where Keene continued his jewelry business.
In 1940, the 76th Congress authorized President Roosevelt to present America’s highest military decoration, the Medal of Honor, to Colonel George Lawson Keene.

Throughout his life, Keene was modest about his accomplishments. And although Keene’s history was known locally, it wasn’t until after his death in 1956, that a medal count revealed Lawson to be the most decorated soldier from World War I.

In the 1980s, an oil portrait of Keene was presented to the Houston County Historical Association in Crockett. This image of Keene was the inspiration for the banner designed by Robin Ogg.