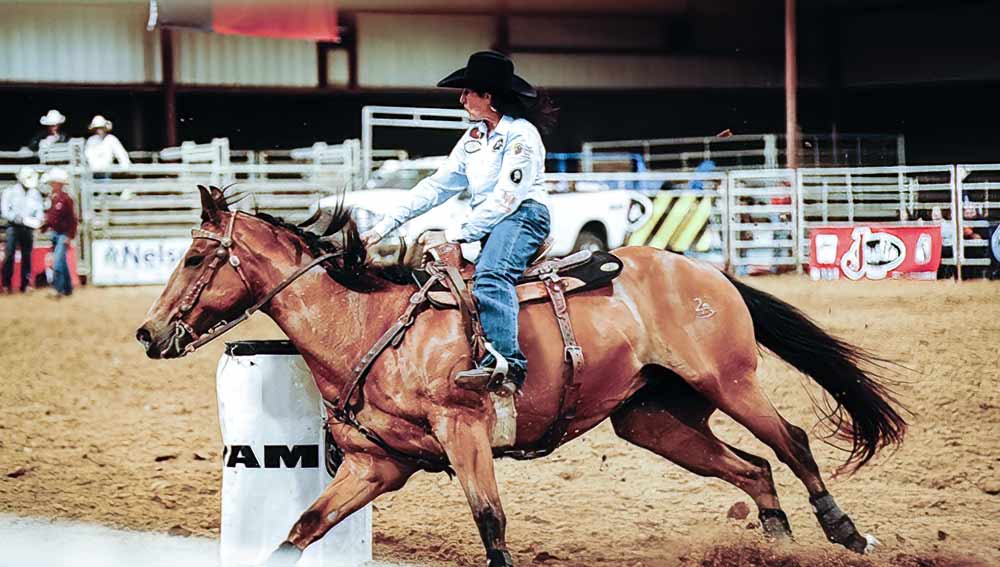 CROCKETT – In December 2019, while working cattle on her ranch, Lexi Mayo was bucked off her cow horse, landing hard on her back and paralyzing her from the hips down. Transported to Memorial Hermann, doctors determined that although the paralysis was likely temporary only time would tell if she would walk again. Tests showed bone fragments lodged in her spinal cord, her T12 vertebra was shattered, and T11 and L1 were broken. Scared and wracked with pain, Mayo searched the face of her fiancé, Dallas Smalley, for some reassurance, but his expression told her the whole story. It didn’t look good. Mayo spent a week in the Intensive Care Unit and a week in the Intermediate Medical Unit before being released. Before she left, doctors told her that it was still questionable whether she would be able to walk unassisted again, much less ride horses.

The news was devastating to Mayo, who had spent her life showing and competing in rodeos. In 2005, Mayo had decided to get her WPRA permit. The requirements are that you have to win at least one thousand dollars before you can be a cardholder. She competed from 2005 to 2009 and won some money, but not enough to qualify. However, in 2009, her luck changed, and Mayo started winning money that went towards earning her card. She managed not only to fill her permit, but she and her horse, Whiskey, made it to the WPRA Finals Derby division that year. Over the years, Mayo had won numerous buckles and championships and, on occasion, would breakaway at some jackpots.

Now here she was, unable to sit for more than 30 minutes without her lower body going numb. Still in excruciating pain, Mayo was determined to find a doctor who might offer her a little hope. That glimmer came when Mayo visited Dr. Robert Mohr. After running his own tests, Mohr gave Mayo the guarded news – they would have to place rods, plates, and screws in her back.

The shattered T12 would be constructed of surgical-grade cement. The operation would take eight hours, and even then, Mohr warned that it might not work.

After Mayo’s surgery, Dallas spoke with the surgeon, who told him hers was the worst break he’d ever repaired on someone still attempting to walk. Mohr had done more reconstruction to Mayo’s back than any patient before. And even if the surgery were successful, she would never be able to ride, much less run barrels again.

But that’s not how this story ends.

Refusing to believe those predictions, Mayo began aquatic therapy three times a week. The pain was so intense Mayo dreaded therapy and cried to and from the sessions each time. Because of the nature of the repairs, she couldn’t bend or twist her body. So she had to start all over again, learning a new way to function. Even the simple tasks like showering, dressing, household chores, and sometimes even getting out of bed took a monumental effort on her part.

Besides battling the physical pain of the injury, Mayo also had to fight against the mental agony. Chronic pain can take its toll – its relentlessness can beat down the spirit and leave the victim questioning whether it’s worth the agony. Mayo admits that she suffered her share of depression. And if that weren’t enough, along came the those who had an ax to grind and told Mayo that she “got what she deserved” and the naysayers who told her she was being unrealistic to think she’d walk, much less ride again. But her best friends refused to give up on Mayo. They even paid her annual PRCA dues for her so she could stay in good standing with the rodeo association. Mayo credits prayer, good friends, and a loving fiancé for helping her get through the tough times.

Over the next few months, she began to see some improvement, but Mayo still longed to ride again. She approached her doctor and her best friends, Kendall Jordan and Jordan Beckman, and asked their help in developing a plan to get back on her horse, Whiskey. It wasn’t until March of 2021 that Mayo, with Dallas’ help, was finally about to mount her beloved horse again. At first, all she could do was sit on Whiskey’s back while Dallas led her around like you would a small child, and she could only last ten minutes before the pain forced her out of the saddle. Eventually, Mayo was able to ride by herself without anyone leading her. Then she had another daunting task to tackle – how to saddle and bridle her horse by herself. But as you can tell by now, Mayo was determined. It took time and a lot of creativity, but because of her independent spirit and never quit attitude, Mayo figured out a way.

In June of last year, an idea began forming in Mayo’s head – she wanted to race again in her hometown rodeo. And she wanted to perform on her old companion, Whiskey, who was twenty-two years old by this time. That’s about age 65 in “people” years. This past December, Mayo got the go-ahead from her doctor and the blessing of her horse’s vet to make the run at the Crockett rodeo.

On Saturday night, May 14, Mayo and her partner Whiskey did indeed make their run at the Crockett Lions Club 60th Annual PRCA Rodeo at the Porth Ag Arena in Crockett. It was a bittersweet moment for Mayo. Although she had triumphed over the injury doctors said would keep her from walking again, her partnership with her faithful companion, Whiskey, was ending. In Mayo’s words, “Whiskey will retire officially as we run out of the alley. But as for me, well, I still have two colts in the barn, and they have some pretty big horseshoes to fill.”

Because of her experience and the bond she shares with her horses, Mayo has recently started a new program called the Equine Outreach Program. Along with Ashley Perez and Kurstyn Adams, Mayo has developed a program to help children bond with God through horses. “Since it was by God’s grace that I am walking, and because horses have been my therapy, I wanted to let horses do for other kids what they’ve done for me.” The program teaches kids how to interact with horses, how to talk to them, groom them, feed them, and gain their trust. If you would like more information about the program, contact Mayo on her Equine Outreach Program page on Facebook.

From the sound of it, this “comeback kid” story is far from over. As Mayo said, “God has blessed me with an amazing man, Dallas Smalley, an amazing set of horses, and a second chance. I can’t wait to see what’s in store for me next.”