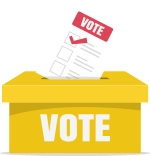 HOUSTON COUNTY – The unofficial results are in for the May 7 special election. The May 7 election gives voters the opportunity to vote on proposed state constitutional amendments, as well as ballot decisions pertaining to school districts and other political subdivisions.

For this voting period, Houston County residents made their voices heard on two statewide constitutional proposals, as well as several city council and school board seats up for grabs.

In the race for Crockett City Council Precinct 5, incumbent Mike Marsh marginally retained his seat on the council with 91 votes. His opponent, Lynda Warfield, received 86 votes.

In the Kennard ISD Board of Trustees election, incumbent Terry Pilkington was elected with 125 votes, and newcomer Angela Higbee by 113 votes, ousting incumbent Keith Cole who received 108 votes.

In the Crockett ISD race, District One incumbent, Ansel Bradshaw retained his seat with 100 votes over Gary Fitch at 52, and Jessica James at 51. Vying for the District Six position were newcomers TieAsia Tucker and Zenita Hamilton. Tucker won the race with 232 votes over Hamilton’s 198.

Proposition one, which authorized the legislature to provide for the reduction of the amount of a limitation on the total amount of property taxes that may be imposed for general public school purposes on elderly and/or disabled taxpayers. Proposition two raises the homestead exemption from $25,000 to $40,000 starting this year.

The next opportunity for voters to make their voices heard at the polls comes May 24 with the runoff races.

Several statewide races are slated, including attorney general and land commissioner, in both parties.