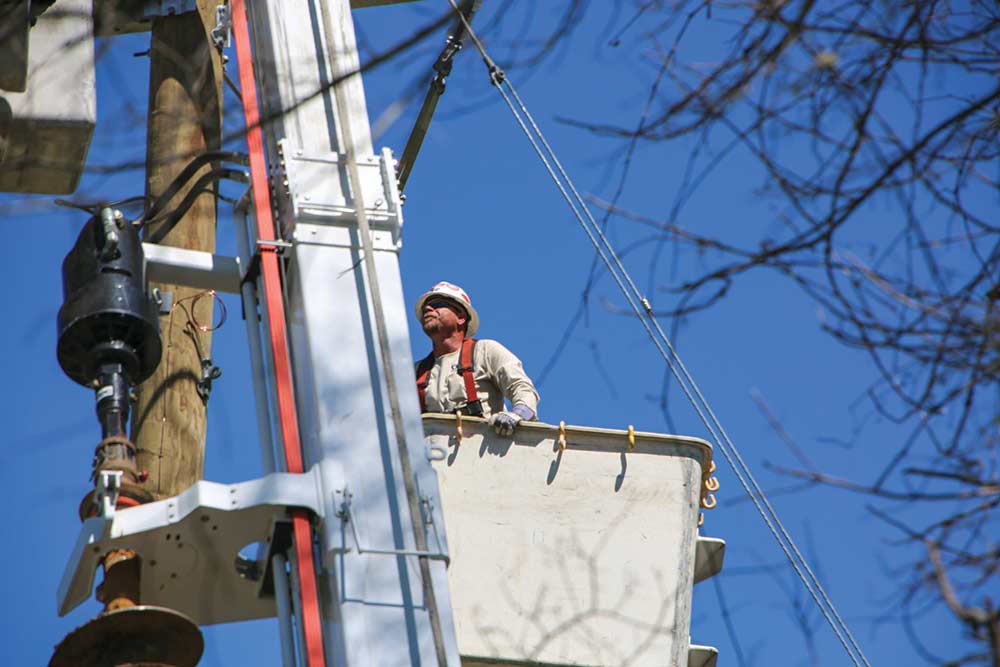 An HCEC worker repairs a connection last week in the tornado’s aftermath. Photo courtesy of HCEC

In the aftermath of last week’s tornado, which left many Houston County residents without power, the crews from Houston County Electric Co-Op worked at a fevered pace to restore power.

Here is a timeline of the events:

Monday, March 21 - On Monday night, March 21, an F2 tornado swept a path from Austonio to west/northwest/north of Crockett, leaving a large number of HCEC members without power. It’s estimated that the tornado spent more than three-quarters of its time on the ground, primarily within HCEC’s service territory.

Tuesday, March 22 - Facebook subscribers awakened to the news that fourteen transmission structures had suffered damage, and at least 25 distribution poles had been affected by the storm, causing over 6,500 outages. Crews were dispersed throughout the county. HCEC secured seven additional crews to expedite restoration, which meant over a hundred extra lineman tripling their workforce. By 8:30 that evening, the outages had been reduced to 5,500. Due to fatigue and safety concerns, the crews were brought back for the evening. Work would resume at daylight the next day.

Wednesday, March 23 - Because of the extent of the damage, HCEC had concerns that it would be Friday,

or perhaps even later, before the power for all members would be restored. But due to the tireless work of the crews, the Latexo substation, which supplies power to Houston County Lake, the Latexo and Belott area, and North Crockett, was back online in record time. By 4:30 pm, outages had been reduced to 4,200.

The Weldon substation, which supplies power to Weldon, South Lovelady, Trinity County, Walker County, and the Eastham/Ferguson Farm area, required rebuilding five transmission structures before they could go back online. Incredibly, the linemen were able to fully restore the Weldon substation by midnight, decreasing the outage count to 1,394.

Thursday, March 24 - An update released at 4:00 pm indicated only 663 outages remaining, mainly in the Crockett area, which sustained most of the damage. Lineman continued working to return power to areas southwest of Crockett. At 7:45 pm, HCEC reported that their system had been fully restored, and there were zero outages.

Pictures provided by HCEC and other community members cannot begin to show the extent of the damage done by the tornado. It is with extreme gratitude that we thank Houston County Electric Coop and the men and women who worked tirelessly - sacrificing time, energy, and family to provide electricity to those affected by the devastating storm.